*9/11/2014* This post has been updated on the new blog. Take a look here to see the new recipe for Nutella Banana Muffins. 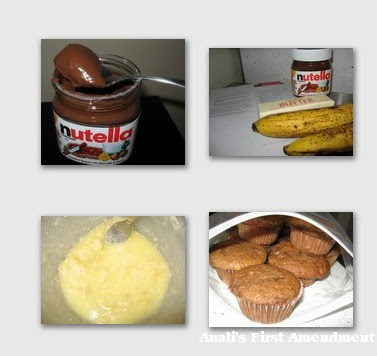 Have you read this article in the New York Times? Senator Ted Kennedy is on the road stumping for Barack Obama and apparently having quite a good time. So I'm reading the article, enjoying every minute of it, when it gets even better.


"Between rallies, Mr. Kennedy indulged in a fancy dinner in Beverly Hills on Thursday night with his wife, Victoria, an aide and two reporters. The maître d’ came over and told a slightly off-color story about Ronald Reagan, who used to sit with Nancy, in the very same booth. (Blasphemy alert: Ted Kennedy is sitting in Reagan’s booth!) Steve Martin and Diane Keaton were at the next table and the senator labored over to pay respects.

On the way out, Mr. Martin stopped by and said, “This dinner is compliments of the Republican Party,” whatever that meant, and Mr. Kennedy belly-laughed politely before returning to his veal."

Not only do they start talking about dinner, but they mention Steve Martin! And you all know that I love Steve and relish any news about him. Well, I was thinking about how he always makes me smile and could not resist using him to lead in to another post that is making me smile.

This Tuesday is important because it's Super Tuesday and many of us will be voting. This is one for the record books too. We are making history with so many states voting on this one day. But did you know that it's also World Nutella Day? Lovers of Nutella unite for one day! So after you vote, treat yourself to something with Nutella.

Well, I'm all set to vote, but I'd never tried Nutella until a few days ago. I don't quite understand how I lived my life for so long without it. It's that good. I made Nutella Banana Muffins to submit to the World Nutella Day event. My recipe is based on this one from the blog delicous days.

I tasted the Nutella before adding it to the mixture. I had to put my hands on the counter to steady myself, because it was so good. If you've never tried Nutella, you just might want to sit down first. When you taste it, you could faint from its pure deliciousness. Well, my pre-Nutella days are over and I'm a new woman.

These muffins are really good, but they were a bit too moist for public eating. When I brought them to work, I had to use a fork. I really try not to lick my fingers in public. Next time I may only use one egg. I converted the measurements from Metric, so the amounts were rough estimates. Also, there was more batter than I expected, so the muffins rose up over the sides a bit.

In medium bowl, add melted butter. Mash bananas into butter with a fork. Mix in all the remaining ingredients except the flour. Stir well with a wooden spoon. Add flour and stir just until combined. I used my regular sized muffin pan and put in paper liners. Pour batter into muffin pan and bake for about 30 minutes at 350 degrees.

*Updated 2/8/08* I had to let everyone know about this great recipe for homemade Nutella that I saw on the blog of Mr. Zen Chef himself. Check it out!

*Updated 8/26/09* I was just getting ready to do some Nutella updating to this post when I read the beginning and noticed that I mentioned Senator Ted Kennedy. It brought tears to my eyes again. Senator Kennedy died today.

I'm still working on a post about him. Here's the post. It's strange how when you look back at an old blog post for one thing, you never know what you'll find and what emotions will be stirred up. Well, it seems rather trivial right now, but I wanted to mention to you Nutella lovers out there, that I have a more recent Nutella related post that you might like to look at.

*Updated 1/31/13* This post is old, but sure has some traction. Welcome to the blog! For those of you getting ready to celebrate World Nutella Day 2013 next week on February 5th, I have many other Nutella posts and recipes. My most recent Nutella creation is a Nutella Chocolate Mug Cake.

It's also interesting that the updates on this post seem to coincide with Massachusetts Senate news. Yesterday John Kerry stepped down as our senior senator to become Secretary of State, making just recently elected Elizabeth Warren our senior senator. Now we have an interim Senator, William  "Mo" Cowan, and Massachusetts is getting ready for a special Senate election in the next few months. Here we go again!

I didn't have Nutella until I came to Italy and whoa boy, I had no idea what I was missing. Truth be told I don't eat *a lot* of it...because I really can't keep it in the house!

I have picked up Nutella at the market at least 10 times and read the ingredients trying to decide if I should try it.

Nance said…
Nutella is an orgasm in a jar. Period. I have discovered that I am powerless if either that or Lay's Classic potato chips are in the house. Those two things are my weakness.

Lisa Johnson said…
bleeding espresso - LOL! If loving Nutella is wrong, then I don't want to be right! : D

mes deux cents - The food blogosphere is pretty fun! Let me know what you do with your Nutella! : )

Anonymous said…
Hi Anali
Well my grandchildren will love this day...their Mother has to restrict the amount of Nutella that they eat. I have sent them to the site. Also have passed on your muffin recipe. Sophia might like to make them.
By the way Good Luck for Super Tuesday and your candidate.
Will be watching with interest.
Cheers
2/5/08, 3:06 PM

Lisa Johnson said…
so simple - Hi Gilli! That would be nice if Sophia made them. Another post for the two of you maybe? My mom just told me that she really liked the muffins. I gave half to my parents. Nothing much decided on Super Tuesday, so we'll have to keep watching.
2/7/08, 12:23 AM

Mike of Mike's Table said…
The muffins sound delicious and like a great indulgence. Nutella is one of those wonderful things I love to have but somehow forget to ever use.
2/8/08, 9:08 AM

Anonymous said…
Hey that's me! The rebellious Zenchef! haha. Thank you!
Do you think i could take over the Hazelnut world with my recipe? hehe
Nutella + banana muffin sound delicious! :-)
2/10/08, 1:29 PM

amisha said…
oohhh... i love nutella! one of my favorite things for sure. i actually try not to keep it in the house because of the speed with which it disappears :)
2/14/08, 8:29 AM

Alex said…
I found this recipe last week and tried it out - they were delicious! By far one of the best muffin recipes I've found on the internet - so delicious and so easy! Thanks for posting this!
6/27/10, 7:09 PM

nycstylelittlecannoli said…
great recipe as have been eating nutella for a long time! glad they are starting to do commercials now to show people what it is! great blog as new follower!!
2/6/11, 7:48 AM

Lisa Johnson said…
nyc style - Welcome and thanks for the comment! I agree about the commercials being good to spread the word. The commercials are a bit odd though, in that they try and pass Nutella off as a way to give kids a healthy breakfast. I love Nutella, but it's not exactly health food. ; )
2/6/11, 12:07 PM

Kimberly at Rubber Chicken Madness said…
Love it! I have to ration Nutella consumption at my house. We buy it at Costco because we use so much of it.

Morgan said…
I love Steve and Nutella, too!

madamdreamweaver said…
My first encounter with Nutella was in Germany many years ago. I was staying with a couple who were relatives by my cousin's marriage to one of their siblings. They made toast for breakfast and one of the things they put on the table to spread on it was---a jar of Nutella. It looked like chocolate spread to me and it just seemed so strange that anyone would spread such a thing on breakfast toast! (This was 1976 and I've never met Nutella before!)
I never tried it then. Many years later I did and it is tasty--which is exactly why I don't keep any around. Too addictive to over-eat.
2/21/12, 12:14 PM