Tears From The Bay State

When I found out that Senator Kennedy died this morning, I cried.

It wasn't sobbing or loud wailing. But as I quietly sat watching television, my eyes would not stop tearing.

I didn't know Senator Kennedy personally. But as a lifelong citizen of Massachusetts, he's always been my Senator. From day one.

As a little black girl growing up in Massachusetts during the late 60's, I heard my parents talking about politicians. About who actually cared about our struggle for civil rights. I heard about the Kennedy family. That they cared about the poor, people of color, or anyone who needed help.

Are they a perfect family? No. Far from it. So those who may want to drone on about their mistakes, that's your business. But not my focus here.

When you hear news reports of people saying that if you needed help, you could call Senator Kennedy's office and someone would help you, some may wonder. This is absolutely true. Even when Bush became president, I figured, well at least we have Kennedy in the Senate.

I was just talking to my mother and she was saying that as much as we are happy with the legislation that he moved forward, we don't know about all the bad legislation that he prevented from going forward. There is a void in Massachusetts, in our country, and in our world. 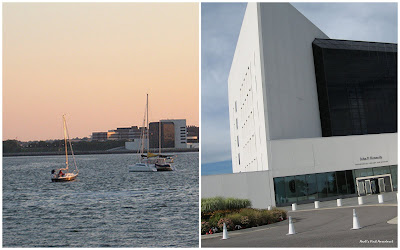 Tomorrow and Friday, there will be a public viewing at the JFK Library. I've always gone there for interesting lectures and events. Or even to sit in the back by the water and watch the planes take off from Logan. I don't know if I'll be going or really what else to write. Rest in peace Senator Kennedy.

Dianne said…
The news left me a bit melancholy all day. It's hard to imagine a Senate without him present. He's been there my whole life, just as yours. Very sad.
8/26/09, 10:28 PM

Suldog said…
My sincerest condolences to you, Anali. I had serious disagreements with some of his views, but he was never one to back down from his beliefs and I admired that greatly.
8/27/09, 8:59 AM

Anonymous said…
I went down to the library this morning at 10am. I know services, etc. don't begin until 4pm or so, but right now there are only news people setting up outside. I parked easily and signed the condolence book without having to wait in line. I was glad to have the opportunity to pay my respects without much hassle. If you can, go now. It's the end of an era.
8/27/09, 11:20 AM

Nance said…
I found your post to be one of the most honest and poignant memorials I've read because it is so simple and direct. I woke up to the news of Senator Kennedy's death, and it made me feel a bit bereft all day. I think that what I am reacting to, like many others, is the loss of another American Touchstone. A little bit more of our story is gone.
8/27/09, 9:02 PM

La Belle Esplanade said…
He was a good man with great power who used it wisely according to his convictions. His sense of right and wrong was keen. Let us hope he won't be the last lion to roar in the Senate. He was a great senator not becuase he represented Massachusetts but because he represented people from all walks of life in this nation. He is one of the reasons America is great. Whatever administration is in charge, the Senate, as Mr. Kennedy embodied a senator's role, enacts the most universally just, thoughtful and fair application of the rule of law.
8/27/09, 10:13 PM

PixieDust said…
This was a very touching testament to a man you admired... and I love the photo of you and your mom, such joy in your eyes, compared to the tears you spoke of here.

I must say, Senator Kennedy was not my favorite person in the Senate but his devotion to country must be noted. (Omitting all the shady business him and his family did in Politics, and his personal affairs).

dmarks said…
He was a true public servant. He threw his life into the Senate. Did you know he refused his Senate salary? He lived "ask not what your country can do for you - ask what you can do for your country"

I wish the other millionaires in the Senate had this kind of integrity and refused their senate salary.
8/29/09, 3:35 PM

Nanny Goats In Panties said…
Very nice post, Anali. Being from the left-hand coast, it's nice to hear a perspective from your neck of the woods.
8/29/09, 6:44 PM

gfe--gluten free easily said…
I found the multitude of personal stories by those he had helped to be really moving, as well as to see all the folks lined up along the route of his hearse. That and your post really say a lot.

Lisa Johnson said…
dianne - Melancholy is the word for it. I guess we can take comfort that he got to live a full life and he did so much good. I do worry about his Senate Seat though. We've been spoiled for all these years.

t - Thank you and I appreciate the link!

Lisa Johnson said…
suldog - I really admired him too.

anonymous - That's great that you got to go and sign the book. I ended up not going. One thing about watching all the events on tv, was seeing the new generation. I think they have his values and hopefully his vision. They may do some great things too.

nance - When someone like this passes, it makes me realize how much I took him for granted. Having him in the Senate was a real comfort and bit of stability for Massachusetts.

Lisa Johnson said…
brentwood kitchen shopper - I like how you said that. "His devotion and moving mountains" So true!

dmarks - I wondered about that! I figured that was the case. I agree about the other millionaires in the Senate. Oh well...

ngip - Thank you for that. I like hearing about perspectives from the other parts of the country as well. We're such a big country, it's so much to take in!