*Edit* To prevent any further confusion, while I was in the audience, I took the picture above of Gwen Ifill on the left interviewing Charlayne Hunter-Gault on the right.

Tuesday evening, my mother and I attended the first of the Fall 2007 Kennedy Library Forums at the JFK Library, which is just a few minutes from my house. I do love being surrounded by so much Presidential history in my neck of the woods. 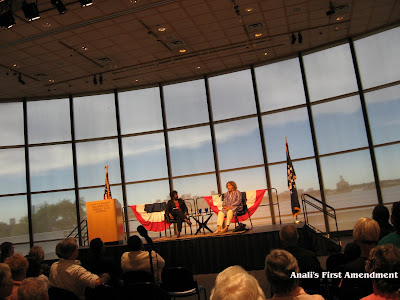 Gwen Ifill, who hosts Washington Week on PBS, had a conversation with Charlayne Hunter-Gault, who in 1962, was the first black woman to graduate from the University of Georgia. Although she is fairly young, she is living history. Her memoir, In My Place, tells the story of that time in her life. 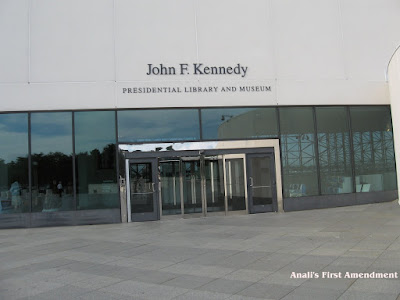 Hunter-Gault's new book is called New News Out Of Africa: Uncovering Africa's Renaissance. She spoke about how she is trying to change the conversation about Africa. In the news, we often see so much about the death, destruction, and despair of Africa. But that is not the whole story. There is much beauty, hope, new industry and possibility. She spends a great deal of time travelling all over Africa and is also trying to make Americans more knowledgeable of the continent. She said that most people are familiar with South Africa and focus on that one country. 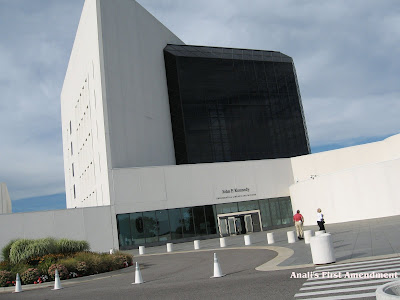 She even mentioned Matt Damon. She said that she saw Damon in South Africa and encouraged him to travel to different parts of Africa and maybe make a movie there and to encourage his friends too. Hunter-Gault also let it be known that she had been summering on the Vineyard and had been to many interesting dinner parties. You know me. I had to wonder what they ate.

Oh and a big thank you to the gentleman who was so nice to my mom! My mom sprained her ankle and broke her foot, so she is wearing a big boot and cannot get around very well. When we were leaving, she stayed out front and I got my car and drove up to get her. When I pulled up next to her and reached over to open the door, a very nice man opened the car door, so she could get in. Then he closed it after she sat down. All done with a smile. Sometimes people are really nice! Thank you sir!

Asha said…
Oh,it's so nice to see you up there Anali.I like Matt Damon too,I think he is one genuinely caring person without any Hollywood air!:)
Yes,there are some gentleman left in this World, hope you meet one like that too!;D
9/6/07, 8:33 AM

i was thinking about something similar last night....

i went on www.novica.com to go look at stuff to buy and saw a page on stuff from kenya...

i started to think how everything is based in south africa....no one really talks about other countries in africa....i kept thinking how i wanted to visit kenya at some point in my life and a couple of other places....

have a nice day!

Lisa Johnson said…
asha - LOL! I'm behind the camera! But it was a great conversation to see. I really like Matt Damon too. He's a great actor and not hard on the eyes! I still have to see the new Bourne movie. And thanks! I hope I can meet a nice gentleman like that too! ; )

aviana - I want to visit Africa too and after seeing her speak, I almost feel like I need to focus on other countries. That's one trip I guess I need to start saving for. After a few years, maybe I'll have enough money!
9/6/07, 10:44 AM

Suldog said…
The Kennedy Library is a wonderful place to visit. I've been there a couple of times with MY WIFE. We'll probably be taking in the upcoming forum presentation on Jackie Robinson. Might you be there?
9/6/07, 11:09 AM

Cynthia said…
And it's small gestures like opening the car door and closing it that gives us hope that all is not lost.
9/6/07, 5:58 PM

Excellent photo work my friend! I must admit that I thought that was you up there myself. It has to be nice living nearby the JFK Library and surrounding places. On a side note, I love your garden. I have started my 1st, at probably not a good time, but I had to see something grow in that bare spot. That has kept me so busy I haven’t had a chance to post on my corner (lol). Actually, that and the kitchen remodel, so expect some nice food dishes in the future. I will have some fall garden questions for you in the near future since you not only cook in the kitchen, but the garden to!

Lisa Johnson said…
suldog - I'm probably not going to that one, but will be attending the Remembering Julia Child one in November.

cynthia - The small stuff does really mean a lot!

dezel - The garden is my mom's. I'll be looking forward to your food posts!

BipolarLawyerCook said…
You're right. You've got to read non-US press to get any kind of news on Africa, good or bad. Our Economist subscription has supplanted all our other news magazines.

starry said…
I would love to visit the presidential library one day. I loved Matt damon in blood diamond. I think there are a lot of good men out there.
9/8/07, 12:06 AM

Lisa Johnson said…
bipolarlawyercook - I'm actually going to start looking for some new African sources and may add some links. But also I thought about Jac, who you may have seen here and blogs from Nigeria. Check out his blog "A Window To My Soul" in my links. We get to see Africa through his eyes up close and personal.