Me & The Pink Panther 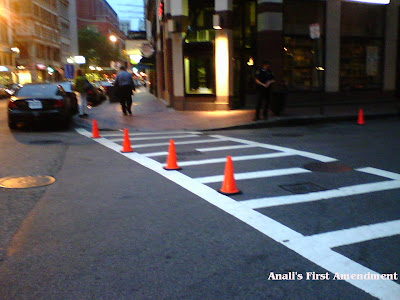 Yesterday, when I was trying to walk to my office, I had my first encounter with Hollywood cinema. No sadly, I wasn't asked to be an extra and I didn't see any movie stars.

The excitement was that they blocked off the street that I needed to walk through to get to my office. I asked a police officer about it and he said that they had to let me get through for work. So I walked up to the movie people and told them my predicament. One guy asked where I worked. I pointed to the very tall building down the street. It's a pretty quick walk from where I parked. He said it would be easiest if I just walked around. Yeah, easier for him! How rude! He wouldn't let me walk through, so I had to walk all the way around a very large block. I found out the same thing happened to my co-worker. She's pretty scrappy and was really not happy about it. I took the picture above after I left the office in the evening.

Since I was being put out, I did ask what movie was filming. He said it was Pink Panther 2. I didn't see the first one, but I had planned on renting it. Steve Martin is one of my all-time favorites. I've had just a wee bit of a crush on him for oh, let me see... Well, maybe about 27 years! I cannot even explain to you how wonderful I think he is. To me he is a modern day Renaissance Man. He does it all!

I just checked his website, that I linked to above, and saw that he has two books coming out. One is a memoir called Born Standing Up: A Comic's Life, which will be coming out on November 20th. I'll definitely be getting this book! The other is a children's book about the alphabet called, The Alphabet From A To Y With Bonus Letter Z! That sounds so cute! It will be coming out even sooner, on October 23rd.

If I could have met him, it would have just made my day and been an excellent early birthday present. I asked if Steve Martin was there and the guy in a very mean and scowly faced manner said "No." So much for my Hollywood in Boston excitement.

There are three movies filming in Boston right now and we're just not used to it. The street shutting down thing is annoying, but there has also been a lot of talk about all the stars around. There have been a ton of them and I guess they're all still around. But for me, well it's kind of all about Steve. I'm getting ready to go to work again in a bit and they're supposed to be filming in the same area through tomorrow. Yesterday I only had my camera phone. Today I'm bringing my camera. Just in case.

Asha said…
That was cool although you had to take a round about walk to your own office! :D
I love old Pink Panther movies, I have DVDs too.New PP, I haven't seen it although I like Steve Martin's in other movies.
Nothing happens in small town like mine except Fantasia, Clay Aiken and Dougherty guy(A Idols!)!!
9/9/07, 3:18 PM

Mosilager said…
I used to like that steve martin movie - roxanne - a lot, but haven't watched many of his other movies.

running randomly into movie sets is something that never happens in my village!
9/9/07, 5:13 PM

Nance said…
You have great taste. Steve Martin has been a fave of mine, too, forever. He's really brilliant along with being funny. Too bad he wasn't there.

Parts of the last Spiderman film were shot in downtown Cleveland, but no stars were present. The director just wanted exteriors. But it really tied things into knots for awhile.
9/9/07, 7:20 PM

Lisa Johnson said…
asha - I was hoping I might see something today, but I guess I missed them filming. : (

mosilager - I really recommend his movies! They are wonderful, but then again I'm really biased towards him. I've never randomly run into a movie set before either! ; )

nance - He really is brilliant. I so enjoyed the tribute to him when he won the Mark Twain Prize. I think it was on PBS a few months ago. What a wonderful look at his work.
9/10/07, 1:05 AM

Anonymous said…
Steve Martin is absolutely on site at the film shoot, and we saw him several times, as well as several stunt doubles during the filming on Saturday
9/10/07, 10:55 AM

GG said…
one of my colleagues vacationing in Boston last week saw the set and waited few mins to look for any actors and HE DID. He saw Steve Martin getting out car and going to his trailor. My friend greeted him with "Do you want a Hamburger?"; Steve corrected him with by saying "Humm burga" and walked away. Steve Martin is really funny!! Anyone has seen Ashwairya Rai???
9/10/07, 12:05 PM

CapCity said…
i think movie people should be more accomodating & pleasant than most are. they're inconveniencing most of us then expect us to PAY to see their movies....sheeesh!
Glad u were not bent out of shape about it, Sistah Anali.

david sullivan - I totally agree! That would be a great!

anonymous - Welcome! You're so lucky! I read that he had lunch at Paparazzi two days in a row, sitting by himself doing a crossword puzzle. I imagined what I would say if I ran into him. First, I would hope that I wouldn't faint and that I could be coherent enough to just say "hi" and tell him how much his work has meant to me over the years.

gaurang - Welcome! That is hilarious! That makes me like him even more! I haven't heard of any Ashwairya sightings, but I'm sure there will be some. She's kind of hard to miss! Calling her gorgeous is an understatement!

amisha - Now that you're in the NYC, I hope you have some "Sex in the City" movie star sightings! You have to keep us posted!

capcity - I guess that guy was probably tired and aggravated with people. At least it wasn't Steve being mean. I would have cried!
9/14/07, 11:44 AM

Anonymous said…
Where exactly is this being filmed? What street in Chelsea? Anyone knows what time they film?
10/16/07, 1:54 PM

Lisa Johnson said…
anonymous - Welcome! I only just saw your comment today, many months later. Sorry if you checked back for a response. I have no idea where the filming was in Chelsea, but I guess it's all over by now. : (
2/3/08, 12:48 PM