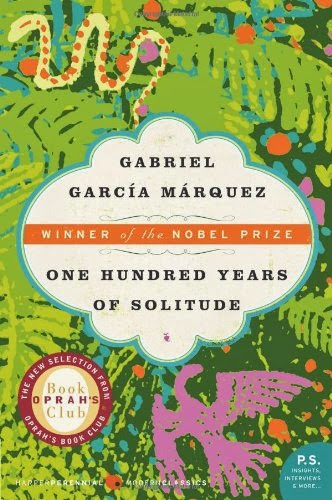 Back in 2006 when I was still a new blogger, I responded to a meme about books.

In the post, I said that I would have loved to have written the first sentence in the book One Hundred Years Of Solitude, by Gabriel García Márquez.

Even now, it's still the most amazing sentence to begin a book that I ever read.

"Many years later, as he faced the firing squad, Colonel Aureliano Buendia was to remember that distant afternoon when his father took him to discover ice."

Twenty-six words that rendered me awestruck. So poetic and containing such force that I read them over and over contemplating the enormity of what must be contained in this book.

Was I even ready to read this book? If one sentence contained so much, how could I ever get through it?

I had taken the book out of the library, but had to return it before finishing. I ended up buying it. I recommend this book to everyone and suggest that you just buy it. I'm all about using libraries and borrow most of the books that I read and DVDs that I watch.

But there are some books that are the exception to the library rule. Some books are meant to be kept and savored for a lifetime of reading. One Hundred Years Of Solitude is one of those books. I recently recommended it to G and he just read it. He enjoyed it as well, but one thing about the book that I should have told him and should tell you is that Márquez is known for the writing style of magical realism, which I love.

The description of magical realism that I found on Wikipedia gets it right in my opinion. I also love science fiction where we often see time travel, an imagined future with new scientific technologies and life on other planets. But magical realism, reveals the magic in this world and blends the supernatural with the mundane.

Márquez died yesterday at age 87. Like most deaths now, I learned about it on Twitter. Similar to when Nelson Mandela died, it seems amazing to me that I lived at the same time that he was alive.

From the way that we learn in school, the focus is often on the great figures who have died. Maybe because for some who were born before their time, they are not appreciated until long after they are gone. Like Vincent van Gogh.

But some lucky ones are born right on time and are celebrated while living. Gabriel García Márquez was one of the lucky ones. He lived to an old age and won the Nobel Prize in Literature in 1982.

I found an intriguing article about Márquez from 1990 in the Los Angeles Times. Stephen King came to mind when I first learned about magical realism. While his genre is horror, his stories have a fantastical element to them. The most awful things happen in quaint small town America.

King's book On Writing notes his hatred for adverbs. The article reveals Márquez shared King's disdain for them as well. I also learned that we share a love for the writing of Edgar Allen Poe. Who by the way was born in Boston and will have a statue here in October.

Some passages in the article revealed something to me about my own writing. Here they are below.


At school, Garcia Marquez learned what he now considers a basic truth: "It may be dogmatic and probably reactionary, but I believe you find some people are born knowing how to tell a story. They have a sense of timing, of organization of facts. After that, it is a long way to becoming a writer. You have to learn to write well. It is a technical process, a process of elaboration and a capacity to elaborate experiences. There are many writers who are just technicians, and you can tell that right away."

In the boarding school, he says, "I was probably the only one who knew how to tell a story. I enjoyed telling stories, and my teachers heard me."

His teachers were political radicals from all over the country, sent into a kind of internal exile to the boarding school, a place where it was thought they could cause no trouble. They recognized Garcia Marquez's interests and let him do as he pleased. He read every volume in the school library in the order they were arranged on the shelves. "I remember there were three volumes of the works of Freud. I read all without knowing what I was reading, but the clinical cases were marvelous. Now I understand why I was so interested--because of the clinical cases."

When I was in high school, after learning about Freud in Biology, I started reading more about him on my own. I was fascinated and became a psychology major because I was so interested in learning more about people and what makes us tick.

In law school, whenever I read the cases, I couldn't help but see them as stories. Because they were. Unfortunately for the people involved, they were part a story gone horribly wrong where a judge had to intervene.

But when I think about great literature or even a great movie, what's needed to make it interesting? Compelling characters with a story that often at some point goes horribly wrong.

Can-Can said…
Thanks for this post. Years ago, I discoverd One Hundred Years of Solitude in an article where writers recommended favorite books. 100 years came up 4 or 5 times and so I knew I had to read it. Never regretted it and should read it again because I was really young when read it.
Writers...write!
4/24/14, 9:07 PM