I Cannot Imagine Life Without Books

I love books. Always have. I've decided to begin by taking the list to back in the day. My mom was sorting through some of my old things a few years ago. She found a bunch of old books and these three I could not part with. That says a lot, because I throw things away with much anticipation and glee. The bindings are splitting and they smell musty, but I don't mind. I thought I might need them for some reason. What if I suddenly became famous (for what I don't know) and Oprah wanted to know my favorite books? Or as it happens, what if I started to blog and a fellow blogger was curious? Good thing I saved them! 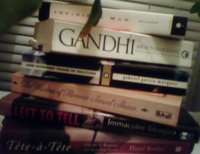 This post could go on for days, so I am trying really hard to self-edit. My favorite books from when I was a kid are: The Mouse And The Motorcycle, by Beverly Cleary. I was in a book of the month club and couldn't wait to get my new book each month. This was one of those books that started my bad habit of staying up really late at night reading.

A Child's Garden of Verses, by Robert Louis Stevenson was another. The pictures are wonderful and I think this would be a great gift for any child even now. Another book that I stayed up nights reading when I was supposed to be sleeping is The Arabian Nights, which is a collection of tales including "Sinbad The Sailor." I would dream about the far away places they talked about, like Baghdad... I longed to travel and see the world.

Okay, now back to the original list. A Book That Changed My Life: The Wisdom of Florence Scovel Shinn. I cannot say enough about this book. This is a collection of Florence Scovel Shinn's writings. In a nutshell, she was a lecturer and metaphysician who taught Universal Law. She talks about karma, affirmations, positive thinking, a lot of what is popular now, but she was writing about it in the 1920's through the 1940's. After reading this book, I realized that how I view my life is what makes my life and that I have the power to change it. A Book That I've Read More Than Once: This is also a book that I refer to over and over and will read throughout my life.

A Book That Made Me Laugh: Bridge Jones's Diary, by Helen Fielding. I read this on the T going back and forth to work. I tried to hold it in, but I know I was smiling like crazy and probably looked demented. I laughed out loud and just couldn't help it.

A Book That Made Me Cry: Left To Tell: Discovering God Amidst The Rwandan Holocaust, by Immaculee Iligabiza. The atrocities suffered by this woman are beyond words, but she conveys her experience with such clarity and depth that it is surreal. Again, I was reading on the T and I know my eyes were tearing up. Being in public was all that kept me from breaking down and sobbing. As sad as this book is, it is also one of great transformation and strength. It was good knowing from the beginning that she has a great life now.

I just realized that I read the next one incorrectly. I'm supposed to name a book that I wish had been written. I have no idea. I initially thought it was A Book That I Wish I Had Written. I didn't really have an exact answer for that either. However, the first sentence in the book One Hundred Years Of Solitude, by Gabriel Garcia Marquez, is the most amazing sentence to begin a book that I ever read. I would love to have written it. It is -


Many years later, as he faced the firing squad, Colonel Aureliano Buendia was to remember that distant afternoon when his father took him to discover ice.

A Book You Wish Had Never Been Written: I don't wish that it had never been written, but I was never so disappointed by a book. It is Invisible Man, by Ralph Ellison. My book club decided to read it a few months ago. We are all black women and knew that this book was supposed to be the quintessential book describing the African-American experience. It was one of the books that we all had always meant to read, but hadn't yet.

Ralph Ellison was a great writer, the descriptions are captivating. But what he describes of what was supposed to represent black life, I don't recognize and found to be repulsive. Why would he choose to write these things? I don't understand. I found myself being more and more annoyed as I read the book and finally just put it down. I couldn't finish it. I asked my mother about her experience reading it. She said that she had the same reaction. I asked her if it would get better and she said it only got worse. I wondered if he had some feelings of self-hate and that was why he would write that way. My mom agreed that it might be an issue. Maybe one day I will finish it. I don't know, but I do not have good feelings about this book.

Books I'm Currently Reading: I'm reading Tete-a-Tete: Simone de Beauvoir and Jean-Paul Sartre, by Hazel Rowley. When I first started reding this, it coincided with starting my blog, so I haven't devoted much time to it. It's quite large, so I'm not carrying it back and forth to work. It's really interesting so far, but taking a while to get through. A friend of mine introduced me to a series of vampire chick lit books. I went to the library and took out Undead and Unreturnable, by Mary Janice Davidson. It's very small, so easily commutable. The main character is planning her wedding and trying to not let the whole "undead" thing get in the way of her fun. It is somewhat amusing, but I don't know that I would recommend it yet.

A Book I've Been Meaning To Read: Well, I've been meaning to finish Gandhi: An Autobiography. I started reading it several months ago and got almost to the end, but I think I was just not in the right mind set to be reading it at the time. Anyway I had not realized he was an attorney, which was interesting. I also had not realized that he had a wife, then decided to practice celibacy (brahmacharya) after they were married. There is so much to admire about him, and I think I had him up on a pedastal that no human can live up to. It was odd reading the book, which brought him down to a more human level. He described his life as a series of experiments, which I guess is all any of us are really doing. I took this to heart and have tried to be more open to trying new things. If I don't like the way it turns out, it was an experiment and I can try something else.

Well, that is my list. I have no idea if you guys want to do this or have the time, but I tag wheresmymind, mosilager, Luis Fernando Largo Gutierrez, and nance,
Email Post
Labels: books Gabriel García Márquez tag writing

wheresmymind said…
A Book That Changed My Life: Fight Club-Chuck Palahniuk...also put V for Vendetta on the list. Not violence, but the freedom from public opinion as to what you should do with your life is very liberating.

A Book That Made Me Laugh: Bloom County Babylon: Five Years of Basic Naughtiness (I don't really read comedic books)

A Book That Made Me Cry: Portraits: 9/11/01: The Collected "Portraits of Grief" from The New York Times. Even thinking about this book makes me teary.

A Book You Wish Had Never Been Written: Walden...yeah, I know, important book..but Thoreau still seems like a spoiled loser to me

Books I'm Currently Reading: Sorta between books, but casually rereading On Writing - Stephen King. I read so much rubbish it's not even funny :)

Lisa Johnson said…
wheresmymind - Wow! I'm impressed; you are fast. Very funny about "Walden." I bought it and have not read it yet. My plan was to go to Walden Pond and read it while sitting under a tree pensively. I know corny. Every summer I say I will do it. I guess I have a few weeks left... I've been meaning to read "On Writing" as well. I've heard so many good things about it.

starry said…
Thats a nice list of books you read. I think I would like this book on your list"Wisdom of Florence Scovel Shinn" appears interesting. Thanks.
8/14/06, 9:51 PM

FreeBeing said…
Don't you just love the books that make you cry?

Hip Grandma said…
you have a nice list of books.i may read them someday.i am a slow reader and these days i read mostly by recommendation.gone are the days when i'd steal story books to the study room along with course books.
8/17/06, 12:34 PM