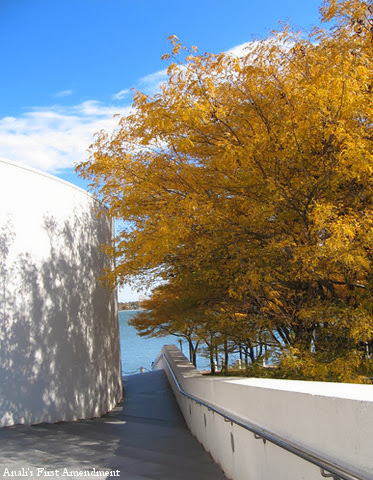 This is one of my favorite pictures of the JFK Library. It was in the fall a few years ago, so the leaves had all turned a fiery yellow. I was walking down the stairs on the side of the building toward the water. Somehow the white building and stairs against the brilliant blue sky and  water reminds me of a Greek island. Maybe wishful thinking for a future trip? But it's right here in Boston!

If you sit on the bottom of the stairs, you can see the planes taking off and landing at Logan Airport over the water. I've done it a few times and have always found this to be a very peaceful spot. 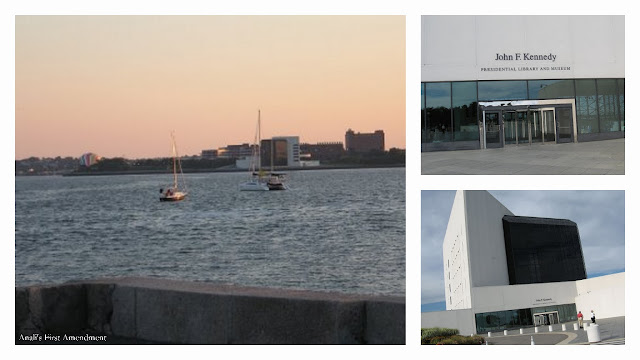 The picture to the left is the back of the JFK Library from Castle Island. The famous gas tank is to the left.

My mother and I have been to several lectures at the library. We even met I.M. Pei, the noted architect who designed the JFK library when he visited the museum and spoke about it.

My mom and I left the lecture late. When we were leaving, he was outside too. We introduced ourselves and he was so nice! I took a picture of him with a camera phone, which was brand new at the time. Sadly, I realized that I didn't know how to use it correctly, because there were no pictures! Talk about missing out on history!

Anyway, even though I've been to several lectures at the library, I've never actually gone through and seen the exhibits about JFK. It's a shame, because it's only about 15 minutes from my house! Since this week is the 50th anniversary of the assassination, I think it's time that I go. There are several special events and maybe I'll get to see one.

Have any of you visited the JFK Library recently?

Can-Can said…
The setting of the library is one of the most beautiful in Boston. I've walked around it down towards Castle Island through Harbor Point many times. I've seen two exhibits there but none in about 3 years. As you said, they have a robust lecture series as well.
Thanks for the post.
11/21/13, 9:14 AM