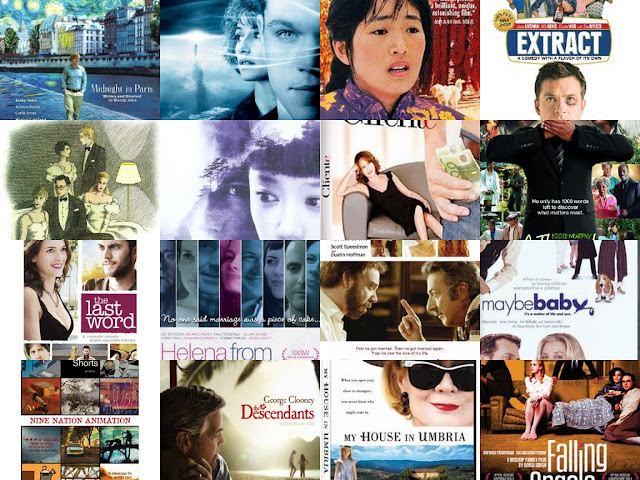 Over the past year, I've been keeping better track of the books that I've read and movies that I've watched. You can follow along, by looking at the left sidebar under "just watched" and "currently reading." Although right now I don't have a just watched listed.

But if you're curious, I just watched Christmas in the Clouds again. Love this movie! Since I wrote about it several years ago, I didn't include the picture in the collage and it's separate from the 2012 DVD list. But I had to at least mention it again as a real Christmas classic.

For a while, I was writing posts with the movies as I watched a few. Like here, here, and here. Then I fell behind and figured I'd do them all at the end of the year. 2012 flew by!

I haven't gone out to the movies in a long time. Although this weekend I might see this or this.

What I usually do is borrow DVDs from my local library. It's free and I can keep renewing them and watch them at my leisure. I can order just about any movie that I could possibly want and  if they don't have it, then I can usually order from the Boston Public Library.

In no particular order, below are most of the DVDs that I watched and mostly really enjoyed from the summer up until now. Some movies I watched and did not like, but I did not keep track of those and they are not listed here.

I always like learning about new movies by watching the previews. I usually keep a running list and that's one way that I order from the library. I would be interested in joining Film Movement, but it's not in the budget at the moment. Have any of you tried their film of the month club?