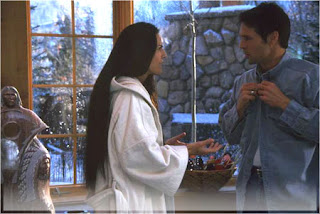 Happy 4th of July everyone! I'm not literally celebrating Christmas in July, but a DVD that I've been waiting to see for several months finally arrived yesterday! Even though it's a Christmas movie, I watched it last night. The movie is called Christmas in the Clouds. What a wonderful film!

I'm not sure if it's ever been shown on cable or network television, but it's full of humor, romance, mistaken identity, beautiful surroundings and has that feel-good timeless quality about it, which makes it a Christmas classic in my eyes. It would be great to see every holiday season. I especially loved the quirky and charming vegetarian chef! He really doesn't want any of the guests to eat meat! The actor Graham Greene is wonderful! I found a Massachusetts connection with the beautiful and talented lead actress, Mariana Tosca. She's a Bay State girl!

Also I was watching and thought I saw Rita Coolidge. I watched the credits to be sure and it was her! Remember her 70's hit Your Love Has Lifted Me Higher? I used to love that song! It was good to see her again. I guess she's doing well, on tour and will have a PBS special coming on later this month.

Here is another quick movie review from an interesting website that I just found on Native Networks, which has a lot of information about film and video created by indigenous peoples of the Americas and Hawaii.

It was interesting that I just received this film at this time, which has a largely Native American cast, because I've also been feeling very sad about the current state of the relationship between African-Americans and the Cherokee Nation. You can read more about the situation here on the Cherokee Phoenix. I'm not going to get into all the specifics here, because this post is getting too long, but I will probably revisit it in more detail later. NPR has an interesting interview regarding some related current legislation. Here is information about the legislation with another link to it.

Most African-Americans have grown up learning that we have some Native American blood. Some can trace it back; some cannot. In my family, I learned that some family members lived on a reservation in Oklahoma. I have no specifics and I'm still researching, but with all that it is going on, it somehow seems a little more personal.

Although, my family are not "African American" but "Carribean American" there are some similarities. In particular with my heritage (Haitian{dad}/Dominican{mom}), it's very difficult to swallow the racism, ill treatment of many dominicans against haitians...when we're all the same....from the same african slaves brought to the same island by the same slave masters. I don't get it...oh well...have a nice weekend. :)
7/4/07, 7:47 PM

Rich Fitzgerald said…
I'll have to check out the film. I love good movies.

I admittedly don't get around your spot as often as I could because I thought it was a cooking haven. CapCity keeps telling me it's so much more, so here I am. I'm glad I stopped by.
7/5/07, 1:49 AM

amisha said…
hope you had a good 4th lisa!
thank you for the links about the cherokee/ african-american conflict. this is something i didn't know anything about... a very distressing conflict and one that brings up so many issues about race, history. i look forward to hearing more of your thoughts about it.
7/5/07, 1:04 PM

Happy 4th, albeit belated! Thank you so much for the link to "Native Networks". I, too, have a huge interest in movies created by indigenous peoples, so this site will be very useful to me. Also, I didn't know that most African-American people have Native American blood...I love genealogy, so I found this interesting as well.
7/5/07, 7:13 PM

Have you seen NOEL? It's with paul walker, penelope cruz, alan arkin, susan sarandon.... it's about new yorkers during christmas and them coming to terms with certain aspects of their lives and how their lives intersect....i thought it was a cute movie.....might be good as a summer movie as well! :)

Lisa Johnson said…
tera - It' such a fun movie!

amisha - Thanks! It was really nice! The whole conflict is a mighty shame. I feel like I need to read a lot more to go into more detail and I haven't had the chance.

lotus reads - Hi and thanks! I had a very nice 4th. I'm glad you like the links. "Native Networks" looks like a wonderful resource.

aviana - Hey! "Noel" sounds like a great movie! Thanks for letting me know. I just added it to my Blockbuster Queue and should have it soon!

Lisa Johnson said…
asha - Thanks! I did!

aviana - African-Americans and Caribbean-Americans definitely have a lot of similarities. We are originally from the same places in Africa, some of us just got dropped off later. : )

so simple - Thanks! It was fab, but kind of chilly later in the day.

mega rich - Welcome! Thanks for giving my blog a try! Hope to see you back again! ; )

Lisa Johnson said…
capcity - I think you'll really enjoy the movie. And I definitely understand all the emotions this brings up.
7/9/07, 2:33 PM