Peanut Butter + Elections: The Good, The Bad + The Ugly 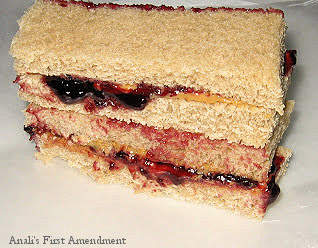 Peanut butter has been in the news a lot lately. Most of us have heard about the ongoing salmonella outbreak in peanut butter. While it was found in a jar of Trader Joe's Valencia Creamy Salted Peanut Butter , the problem seems to be far more widespread than just this brand.

The salmonella outbreak and subsequent recalls have been tied to Sunland, Inc.'s manufacturing facilities. Take a look at this list to see if any of the peanut butter in your home may be part of the recall.

When I was in TraderJoe's about a month ago, I almost bought some. Luckily I ended up not buying any peanut butter there. After writing this post, I ended up buying a jar of Skippy Natural Creamy after comparing it to a store brand's peanut butter. It's good stuff and was on sale!

But after that jar of peanut butter was almost gone, I ended up buying a different store brand. Luckily it's not on the the peanut butter recall list either.

We go through a lot of peanut butter in this household. I love a good peanut butter and jelly sandwich and even waxed poetic about it in a post. Which leads me to the next  peanut butter topic.

Even without salmonella issues, peanut butter can be deadly to those with nut allergies. Recently, a child's peanut butter and jelly sandwich was confiscated in the Viola Elementary School lunch room. The school in Viola, Arkansas has banned all peanut products from the lunch room, because at least one student has an allergy severe enough that even breathing near peanuts or products containing peanuts could cause a reaction.

According to the Centers for Disease Control (CDC), an estimated 4% to 6% of U.S. children under age 18 have food allergies and the numbers are rising. Eight types of foods account for 90% of all food-allergy reactions: cow’s milk, eggs, peanuts, tree nuts (such as walnuts, pecans, hazelnuts, almonds, cashews, pistachios, and macadamia nuts), fish, shellfish, soybeans, and wheat.

I've started to wonder what this means for the future of the American workplace. So far this peanut issue is mostly confined to school lunch rooms. But these kids will grow up and go to work. The nut allergy numbers are rising. What will happen if an organization has a few people with severe nut allergies? Will the entire company ban peanuts and peanut products from the premises? Will we no longer be able to bring a pb +j sandwich or pad thai for lunch?

Who knows? But according to another article that I just read about pb + j, maybe there's another reason not to bring the sandwich for lunch. It could be racist.

Now I don't actually think it's a racist sandwich, but the article makes a point and opens up the conversation to think about what we eat in a more inclusive way. Here's part of the article below.

“What about Somali or Hispanic students, who might not eat sandwiches?” says Gutierrez, principal at Harvey Scott K-8 School, a diverse school of 500 students in Northeast Portland’s Cully neighborhood.

“Another way would be to say: ‘Americans eat peanut butter and jelly, do you have anything like that?’ Let them tell you. Maybe they eat torta. Or pita.”

Our food reflects part of who we are. For us Americans, if we eat meat, what's a Thanksgiving without a turkey? So many cultural traditions are carried out through the meals that we prepare and eat.

Sometimes a ritual is so ingrained in us that we don't even identify it as a ritual anymore. It's hard to step back and explain why. It just is. It's what we do. But it's deeper than that.

There's a reason behind why we eat ham and color eggs for Easter and have barbecues for the 4th of July and eat black eyed peas for the New Year. But after something has been done for so long, we stop wondering why and just do it.

Food is such a huge part of our culture. I wrote about this before in a post about chocolate chip cookies and being American.

Any thoughts on this? What are you cooking up this weekend?

In the United States, this a long weekend. Monday is Columbus Day. While it's still celebrated in most states, there are so many things wrong about it. South Dakota now recognizes the day as Native American's Day. Berkeley, California recognizes the days as Indigenous Peoples Day. You also might be interested in this post about The Mayan Word.

Also, being in Massachusetts, Scott Brown, a Republican is running to keep his Senate seat, which used to be Senator Kennedy's. He is running against Elizabeth Warren, who I will be voting for. She has claimed to be part Native American. This issue has blown up and resulted in some "less than progressive" actions and statements by Brown and his supporters.

With Monday being the day that this country celebrates the occupation of the Americas by Europeans, maybe this is a good time to sit back a bit and think a little bit more about our culture. Why do we still celebrate this holiday?

The Duo Dishes said…
And to think it all started with a peanut butter and jelly sandwich. It would be great if school menus could expand beyond pizza and tacos. It's a perfect way to expose children to other cultures and new foods, while attempting to include everyone who comprises the community.
10/15/12, 10:15 PM

Lisa Johnson said…
tdd - Great suggestion! It seems that schools are moving towards having healthier lunch choices, which hopefully will include more diverse foods, making their lunches healthier all around.
10/16/12, 10:51 AM