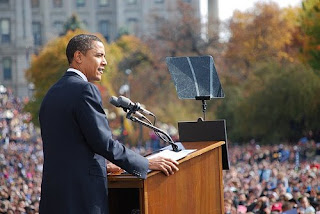 Well, I would say that my recent poll on President-elect Obama's choices for his team was quite a success.

Yahoo! News helped again giving this blog around 1,200 visitors that day. 534 of you have voted so far, which is a pretty good percentage. See the questions and answers below. Photo via flickr.

How do you feel about President-elect Obama's choices for his team?

Cick here to see poll results on PollDaddy.com. Three people left comments on that website, which I've copied below.

Janice said, "I'm okay with everyone but Hillary. I just don't trust her, I believe it was a political move. I just pray that he has someone watching her because she is rather cutthroat."

M. Snavely said, "I do not agree with all his ex-Clinton people. I thought he was for change. The Clingtons are so hungry for money and power, they will be running the White House - not Obama."

Ramona said, "I think Obama choices are reasonable. Obama is looking at resumes. I think Hillary will be a great contribution to the Obama team. I think Obama is going in the right the direction!!! I believe in him and it's sad because this is the 2nd time that I am excited about the choice that we the American people have made with electing a qualified President. The 1st time was Bill Clinton!!!"

Thank you everyone for your enthusiastic response! This poll is certainly not a scientific one. Just based on my curiosity. However, it does give me a general idea of what many of you are thinking.

Overall, it seems that a lot of you are pretty happy with Obama's choices. I'm still feeling rather overwhelmed, but I believe that our President-elect knows what he's doing. I have to have faith in his choices even if I don't understand and/or agree with some of them.

Lisa Johnson said…
mizrepresent - Hey Miz! Good to see you around here again. I haven't baked anything fun since the bread. I made some stir fry veggies and soup since then, but they're too boring to blog about. I have more fun with the sweet stuff.