The Drama Over Other People's Food Choices 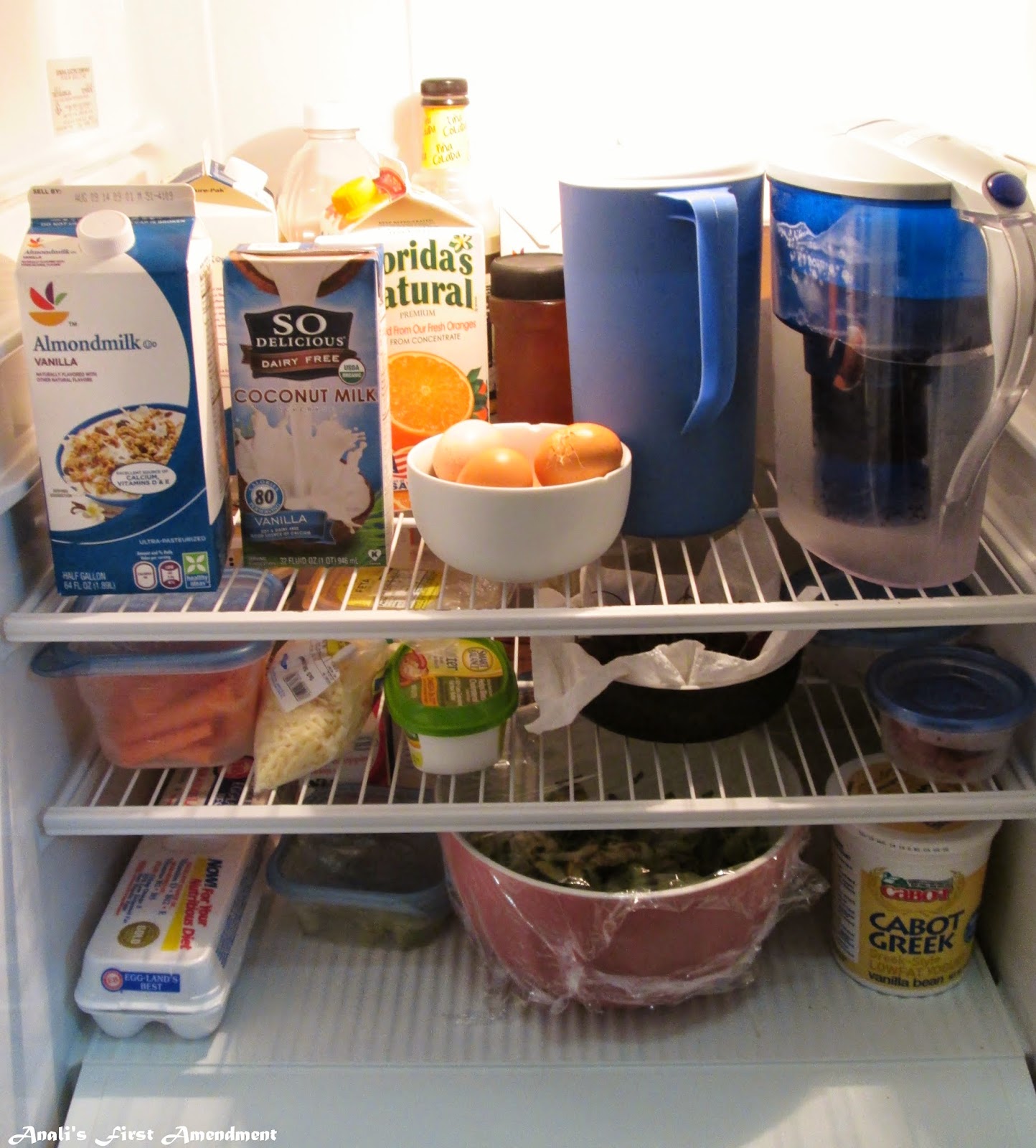 This is the food in my fridge right now. I haven't shared this type of food picture in a while. Not terribly controversial at first glance. Well, at least to me. The meat industry would probably not be particularly pleased.

I'm getting ready to make some deviled eggs and I have some ginger simple syrup ready to add to my Pukka Love ice tea as the amount gets low. Hopefully my mention of these things is not stirring up feelings of rage. But you dear reader are probably calm and rational. However, many people are not.

Yesterday, I had a spirited conversation on Twitter about an article that I read on Salon. The article is about a food blogger named Jordan Younger who runs a very popular blog called The Blonde Vegan. At least that's the name of the blog right now. The controversy is that she used to be a vegan, but now she's not.

According to her blog, she "developed orthorexia as a plant-based vegan, which is an obsession with 100% clean, healthy eating and dieting and a fear of anything that does not fall into that rigid category. The restrictiveness that veganism taught me, coupled with my totally extreme personality, lead me to the eating disorder that I developed, and a whooole lotta craziness and stress ensued from there."

The blog has quite a fan base, but according to the article, many became angry when she decided not to remain vegan. The trolls started with very negative comments. One person strangely and ironically even threatened to "barbecue" her family.

Anyway, after reading that article and debating it on Twitter, this morning I read a similar article. The title, "Lay Off the Almond Milk, You Ignorant Hipsters" kind of pushed me over the edge and I needed to write it out.

I'm certainly not ignorant, nor a hipster. But I do love almond milk! I drink it everyday. Sometimes multiple times a day. I was one of the people who used to drink soy milk. Since I eat other soy based products, I was concerned about possible hormone imbalances caused by eating too much soy.

Unlike what the author seems to assume about almond milk drinkers, I also eat whole almonds and a variety of other nuts on a daily basis. Often over granola. Eaten with, you guessed it, almond milk!

The author also is focused on one brand of almond milk, which I won't mention here. I generally buy the store brand at Stop & Shop. It's $2.49 for a half gallon, which is pretty reasonable compared to the name brands, even though they raised it ten cents recently. Yes, I noticed!

The article also mentions that the additive carrageenan is commonly found in almond milk. I hadn't paid particularly close attention to this and did notice it on the label of my almond milk. It is something to be more aware of. Apparently it can cause gastrointestinal inflammation.

Inflammation of any kind is never good for the body and it's something that my mother has had to deal with over the years, so I am hyper-aware of it. I've recently increased my intake of fresh ginger and ground tumeric, in order to fight inflammation.

Anyway, overall the article was rather interesting, but the commentary and backlash that can arise over the foods that other people decide to eat or not to eat never ceases to surprise me.

Can-Can said…
Have you checked out the Food Babe website/blog? Also, a few years ago, I read the book The Vegetarian Myth - the woman rants a lot, screeches a bit but there are a few good points.
My avoidance of soy started because I was wary of how it was being so promoted. I then realized that so much of the soy we access in this country is genetically modified and I wanted to avoid it. I have the creed that fod that has too many ingredients and that is too modified from a long tradition of its preparation is to be avoided. TO me almond milk is a bit over-processed and almonds can't truly be milk. I also have a wary eye on coconut milk and water which is being pushed heavily. (And I love it in smoothies.) We all have to do what works best for us and as we gain knowledge, plan accordingly.
I recently went on a spree with this prepared I tea I love. Then I read an article that if it doesn't say real brewed on the bottle, it probably comes from a powder. Yikes. I checked 3 of my favored bottles of tea and found that only 1 said "real brewed." So, I'lls tart doing what I normally do - bew my own - I control the sweetness much better that way.
8/26/14, 1:31 AM