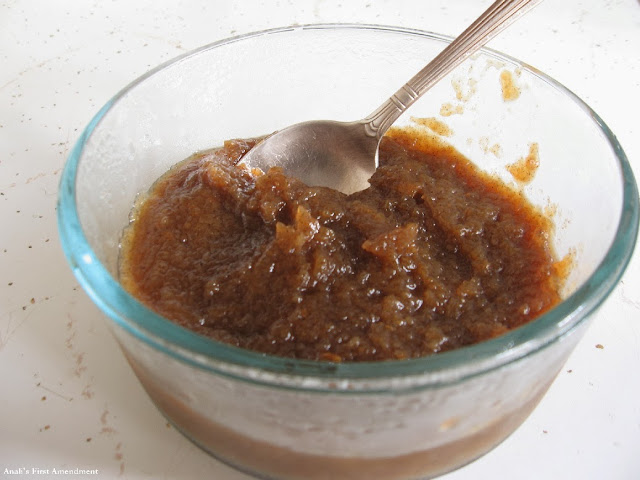 My relationship with pears is tenuous at best. For years I didn't like them. The grainy texture can throw me for a loop.

Then I'll try the most perfectly ripe one and fall in love. Until I fall out again. But it usually takes me time to realize it. So for a few months, I'll keep buying pears and not eating them.  I end up baking with them after they've almost reached the point of no return. That's why I used pears in the berry breakfast cobbler recently.  That's also why I made this cardamom pear butter.

I found a pumpkin butter recipe online at Bon Appetit, which I used as a guide and adapted for pears. The recipe has suddenly disappeared, so I can't link to it. While it's not the recipe that I used, I did find a pear butter recipe that looks quite good. It might be easier to follow as well, since it was probably repeatedly tested.

But that's not how I cook or blog. This recipe was adapted from pumpkin and I just used the pears that I had and tried to keep things as simple as possible using ingredients that I like. The amounts are approximate, because I don't always measure. When I do, it may be a rather rough measurement.

The major mistake I made, which was corrected with an extremely long cooking time, was using too much water. I covered the cut up pears with water and should have used less. It took about 3 hours to boil down. The amount of water in the pumpkin butter recipe seemed too low, (1 1/2 cups) but I should have followed it.  The pear butter recipe calls for 2 cups, so probably somewhere between the two is good. So I will put it here and assume that will work.

Put all the ingredients in a large pot. On medium heat, let boil until the pears are soft. Remove from heat. Be careful the pears and liquid are hot! Let cool for a bit and use a strainer to strain the pears. Take the strainer and place over a large bowl. Use a large spoon to put the pears in the strainer and press the pears hard against the strainer. It will leave the skin behind and you will have a nice liquid pear pulp for the next step. This takes about 15 minutes or so.

After you have strained the pear pulp, pour it back into the pot with any liquid that may have remained from cooking before. Taste it. If you want it sweeter, then add some more brown sugar. Maple syrup or honey might work too. Set the heat on low and let simmer until it is cooked down and almost dry. Stir often. Hopefully no more than an hour or so. But it takes as long as it takes.

Pear butter, like pumpkin butter or apple butter is a delicious spread that is wonderful to put on toast. Which is how I'm using mine. Store in a container and refrigerate. It will probably stay fresh for a couple of weeks. But it probably won't last that long.

Enjoy and have a good weekend!