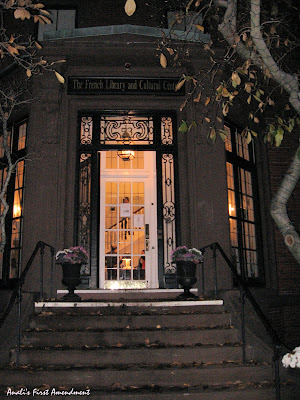 Thursday night, I finally got the chance to meet Carol Gillot, the blogger behind Paris Breakfasts, one of my favorite blogs.

She had the opening reception to kick-off an exhibit of her paintings called Paris Façades at the French Library in Boston.

Paris Breakfasts was one of the first blogs that I discovered. I remember looking at her paintings wishing for one. Then a couple of years ago she did a swap. I traded a tea cup for an original watercolor. I love it so much!

And last night it was such a joy to finally meet Carol in person. She was so nice to take time out to sit and talk with me, when so many people wanted to see her. It was a beautiful exhibit and I recommend taking a look if you're in the area. If you love Paris, then you really should see Paris Façades , which runs through November 28th. 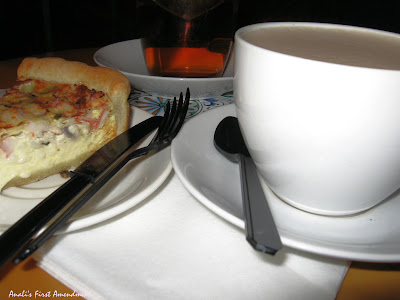 The day before, I met another blogger for lunch. Mary Kate, writes the delicious blog Kitchenbelle. Even though she lives in the Boston area, I didn't meet her until attending BlogHer Food '09 in San Francisco. She was one of the first people that I met. Such a small world!

We had a quick lunch at L'Aroma Cafe on Newbury Street. The seafood quiche and my chai latte were really good. They didn't announce our food as it became ready and was put out on the counter, so that was odd, but other than that, I really liked the place. Everyone was very nice.

Mary Kate and I had a great conversation about blogging, writing, work, and how the economy has changed. She even saw another food blogger that she knew of, but didn't end up talking with her. L'Aroma Cafe was just teaming with food bloggers!

I also found out that Mary Kate interned at Flour Bakery and did recipe testing for Joanne Chang's upcoming cookbook. I love Flour Bakery and previously did an email interview with Joanne for my old blog, And Razzleberry Dressing. She was so nice and gave me a wonderful bread pudding recipe. When I spoke to Mary Kate about it, she knew the recipe! Again, such a small world.

Well after our lunch, we parted ways and I met up with a non-blogging friend. On my way to meet her, I walked through Boston Common. 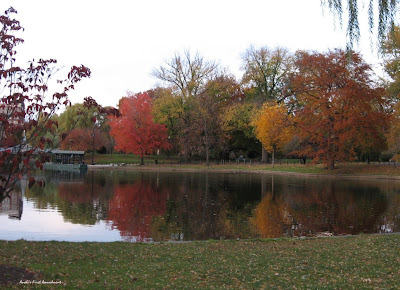 There were so many squirrels scurrying about in the fallen leaves. I had to take a few pictures. 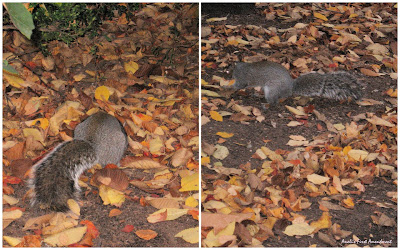 Well that's it for now. I was going to add more to this post, but I'm beat. Have a great weekend everyone!

T. said…
I'm so bummed I missed the Paris Breakfasts event! I am looking forward to checking out Kitchenbelle. Sounds like two very nice blog-related experiences! Isn't it wonderful how blog-writing and blog-reading can really add positive energy to our lives?
11/7/09, 9:41 AM

gfe--gluten free easily said…
Way cool on meeting the author of Paris Breakfasts. Love that you did a trade with her a while back--too cool. :-)

And, Mary Kate is such a delight. I'm really glad you, two, had a lovely lunch together. My friends and I (locally and far and wide) often compare notes and it's amazing how our paths have paralleled and even crossed at times without us meeting. It is indeed a very small world ... wonderfully so!

Tracy said…
So glad you had a chance to meet your friend, Anali! It's always a very special thing to meet a blog friend for real. Last year I met two blogging friends...it was such fun, and solidified the friendship even more. Carol's art is beautiful and inspiring. Happy Days :o)
11/9/09, 9:37 AM

PixieDust said…
That was some tea cup! Sounds like it was a wonderful swap, and a wonderful time this weekend...

Lisa Johnson said…
t - They were pretty neat! I hope you have fun over at Kitchenbelle's place.

gfe - It's amazing how small the world is! I'm convinced that the whole six degrees of separation thing is more like two or three.

el - You can still catch her show if you get a chance.

tracy - Her art is truly inspiring. Those lovely watercolors really take you away to Paris for a little daydream.

kitchenbelle said…
It was wonderful having lunch and visiting with you, Lisa! I look forward to doing it again soon!
12/6/09, 4:30 PM