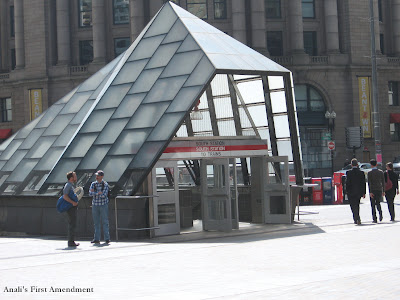 Will you be visiting Boston soon? Maybe you're in the beginning stages of planning your summer vacation. Or maybe you'll be taking a day trip to the city.

Well either way, if you take the bus or train, you might end up at South Station. I often see people walking with their suitcases to nearby hotels. When the weather is nice, like it was last week, it's not a bad option.

Depending upon which way you exit, if you look to your left or straight ahead, you might see a bunch of food trucks. Their presence is fairly new to Boston, but a welcome sight. Look at the lines! Take a look here for the food truck schedules. 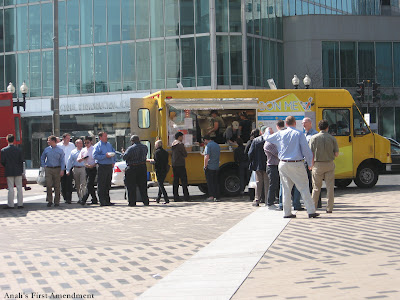 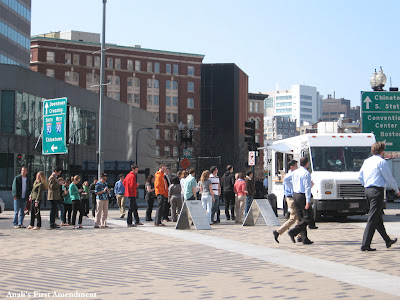 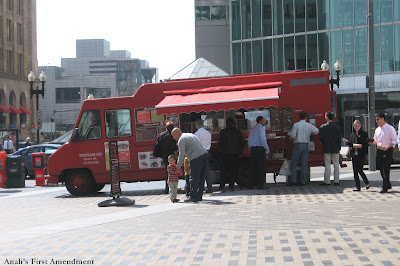 Granted, the day I took these pictures it was around 80 degrees. What a treat for a New England day in March!

If you look to your right when you exit South Station, you will see Dewey Square, which is the beginning of the Greenway. It's also the former location of Occupy Boston. In a couple of months, the Farmers Market will be back. 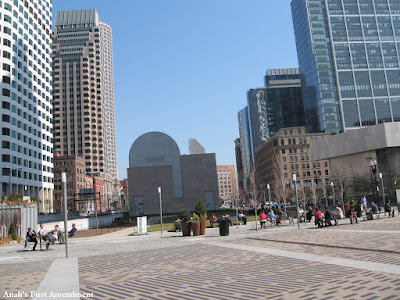 To the left of this picture, when you cross the street, you will be on Federal Street and see Crumbs Bake Shop to your right. How's that for a Mini Boston Tour?

Last week, I briefly met a couple visiting from Nebraska. They were lucky to be visiting during the balmy weather. I was on the Braintree train going home. I was sitting to the woman's left, her husband was sitting across from her, and a young woman was sitting to her right. Her husband walked over and was asking her something while very closely hovering over both of us. Awkward.

Anyway, after feeling that my personal space was being invaded, I heard the woman saying that they were looking for Quincy Market. The woman sitting on her other side said that they were going in the right direction, because they were on their way to Quincy. All I could think was, "Oh no." The woman wanted to know which stop. North Quincy or maybe Quincy Center.

Clearly the woman trying to give directions had no idea what she was talking about and was about to get this poor couple even more lost. So I interrupted and told them that Quincy Market was actually part of Faneuil Hall, near Government Center, and they needed to get off the train and go back into Boston, because they were headed to Quincy. I told them that if they get a chance, they might want to come back to Quincy, because there is a lot of history to see there too. Had to give a plug for the City of Presidents!

However, regardless of what they decided to do another time, they needed to take the Red Line back in to Park Street, switch to the Green Line and go to Government Center, then walk down the big set of stairs, and cross the street to Faneuil Hall.

When I first learned that Quincy Market is actually not in Quincy, I was confused too. Poor tourists! Hopefully they made their way back and enjoyed the rest of their vacation.

Sometimes it seems really difficult to get around Boston, but the more I just walk and explore, I find shortcuts and realize how close certain places are to others. As I find them, I'll share them with you. Feel free to ask me questions here in the comments or send me an email. Especially if you're getting ready to visit. If I don't know the answer, I'll find out for you.

The Duo Dishes said…
Didn't know there is a Crumbs in Boston! Looks like they have a few spots across the country. Their cupcakes are monstrous. Boston is on the list of cities to visit in the very near future, and you've outlined must visit spots.
3/28/12, 9:08 PM

dmarks said…
Good post. I've been watching old episodes of "Cheers" lately and trying to remember my Boston trip from long ago.
3/28/12, 9:53 PM

Lisa Johnson said…
the duo dishes - Crumbs is the newest sensation here and people are going nuts over it! Let me know when you visit, I'd love to get together with you. : )

Suldog said…
You're a good native (but I knew that already.) Some folks, sad to say, would have just snickered to themselves and let the poor tourists go on to Quincy.

I always step up and offer help if folks look confused, or are consulting a map downtown. Most of the time, the folks offered the help are so grateful for it, they practically slobber on you when they thank you :-)

Lisa Johnson said…
suldog - I believe in karma, the golden rule, do unto others. It's all the same thing. I like to think that 99% of us natives would help tourists in need. I really do think that most people are good. We're all going to get lost eventually and hope that someone will help us too! : )
3/31/12, 2:19 PM