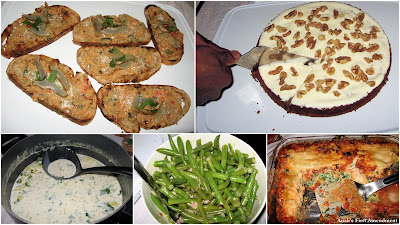 It's been quite some time since the last Dinner Club post. There was some disagreement about whether or not to meet during the summer. Some wanted to. Others thought that it would be too much.

Well, here we are on the last day of August and our last dinner was in June. We're supposed to start up again in September with an end of the summer Bobby Flay barbecue. Hopefully it will happen!

So back to our last dinner. Jamie Oliver was the celebrity chef. He's one of my favorites in terms of personalities and I love his show!

We all noticed something similar about his recipes. He's rather fast and loose with the amounts of ingredients, so we all reached a point in cooking where we had to go back, read again, and were like, "What?! How much?"

Also, his recipes tend to have descriptive fun names. I started to edit them to just the actual dish, but why take out the personality? It's one of the things that I like about him.

We all enjoyed our food. I did make a mistake with the cannelloni though. After I put it in the oven, I realized that I forgot one of the cheeses.

When I opened the fridge and saw the cheese, I wondered, "Why is that still there? Oh noooo!!" I had a small meltdown, but recovered and just put the cheese on top. It was fine.

My favorites were the green bean salad and the bruschetta. Oh and the corn chowder too! So good!

The meal ended up being vegetarian, although it wasn't planned that way. Jamie loves his vegetables! Here's our full menu below.

A Rather Pleasing Carrot Cake with Lime Mascarpone Icing

The Duo Dishes said…
haha A rather pleasing carrot cake. Those names are really cute. Dinner parties like these are fun, though. You break out of your usual, try new techniques, experiment with new ingredients sometimes. Plus, you can test a bunch of recipes from one chef and see how they stack up. Good times!
9/1/11, 11:41 AM