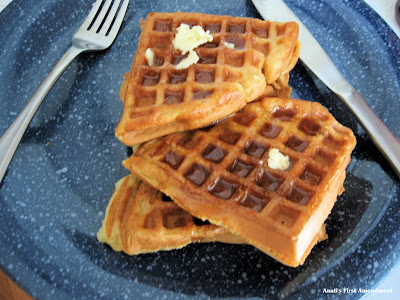 I know the French Toast Alert System is in effect big time today. After all, the Boston area is getting ready for yet another snow storm. We're supposed to get up to nine inches from early evening through the morning tomorrow. 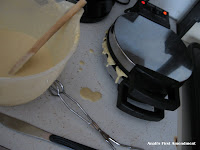 For those of you not familiar with the French Toast Alert System, the easy explanation is that when we're getting ready for a snow storm, everyone prepares by going out and buying any necesarry provisions to carry them over through the next few days if they can't make it to the store. Those provisions being milk, bread, and eggs. The fixin's for French Toast.

You really have to read the descriptions for each level of the alert system. They are hilarious and were written by Adam Gaffin of Universal Hub fame. Right now we are at the orange level, which is the second to highest level.

"Heavy snow predicted. Harvey Leonard breaks into huge grin, can't keep his hands off the weather map. Proceed at speed limit before snow starts to nearest supermarket to pick up two gallons of milk, a couple dozen eggs and two loaves of bread - per person in household." 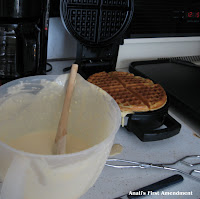 While I greatly respect the wisdom contained in The French Toast Alert System, I made waffles today. Can you blame me? These were good. Get the recipe here.

Susan from Food Blogga said…
I think the reason I always favored French toast was b/c you didn't need special equipment to make it. But my grandmother used to have a waffle iron, and there was nothing, absolutely nothing, I loved more on a lazy Sunday morning than going to her cozy apartment and sharing maple drenched waffles with her.
1/11/09, 11:14 AM

Lisa Johnson said…
susan - Those sound like some wonderful Sunday mornings with your Grandmother. Such priceless memories. I still love French Toast, but G special requests the waffles and I certainly enjoy them too. ; )
1/11/09, 3:43 PM

Lisa Johnson said…
twenty four at heart - They were yum!! ; )

Mizrepresent said…
Gurl, i just love to come here and see you cooking AGAIN! Those waffles look delicious! Gonna check out that plan of yours too!
1/15/09, 7:33 PM