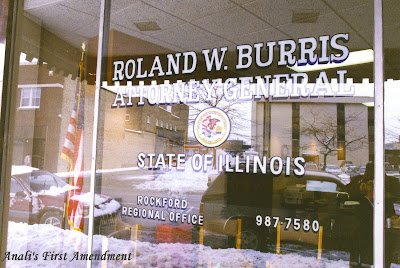 What's my connection to Roland Burris? It's pretty much the same as what I have in common with Gisele. Virtually nothing except for a picture.

When I first learned that Illinois Governor Blagojevich had appointed Roland Burris to President-elect Obama's former Senate seat, I knew the name sounded familiar. Really familiar. Then in a flash I remembered.

Circa 1992, I was visiting Rockford, Illinois. The person that I was visiting worked at the Rockford Regional Office of then Attorney General Roland Burris, which we visited. I'm always taking random pictures and I took this one of the window. You never know when you might want to use a picture. Maybe sixteen years later on the eve of a new year in the midst of a political scandal.

dmarks said…
The first question that came to my mind when Governor B. appointed him, was "how much did Burris pay for this?". No one should accept the nomination until there is a noncorrupt governor to make it.
1/2/09, 6:09 PM

Lisa Johnson said…
dmarks - I agree that it's sketchy for him to accept this appointment. He could be the best qualified person ever, but there is going to be a taint. No matter what he says or thinks.
1/3/09, 7:01 PM