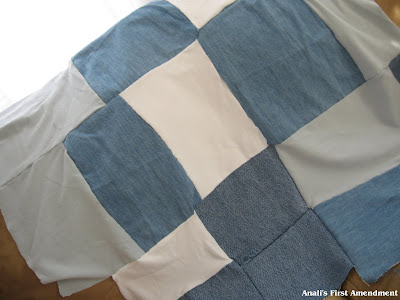 Have you seen the movie How To Make An American Quilt? It’s a really great movie starring Winona Ryder as a young woman getting ready to get married. Her grandmother and her friends all decide to make a wedding quilt for her. While they are quilting, they start sharing their life experiences and we see the many different stories from the past. As the young woman ready to embark on a new chapter in her life, hearing these stories forces her to start thinking more about her life and future.

As you can see from this picture, this is the beginning of a quilt that I’m making. About three years ago, my mother and I went to the Boston Museum of Fine Arts and saw an exhibit called The Quilts of Gee's Bend. The quilts are incredibly beautiful and the stories of the women who made the quilts are awe inspiring as well. I decided then and there that I wanted to learn how to quilt and maybe somehow tell my own story in fabric. Plus have a pretty new quilt in the process!

Here is an excerpt from the website telling the history of the women and the quilts.


“Gee’s Bend is a small rural community nestled into a curve in the Alabama River southwest of Selma, Alabama. Founded in antebellum times, it was the site of cotton plantations, primarily the lands of Joseph Gee and his relative Mark Pettway, who bought the Gee estate in 1850. After the Civil War, the freed slaves took the name Pettway, became tenant farmers for the Pettway family, and founded an all-black community nearly isolated from the surrounding world. During the Great Depression, the federal government stepped in to purchase land and homes for the community, bringing strange renown — as an "Alabama Africa" — to this sleepy hamlet.

The town’s women developed a distinctive, bold, and sophisticated quilting style based on traditional American (and African American) quilts, but with a geometric simplicity reminiscent of Amish quilts and modern art. The women of Gee’s Bend passed their skills and aesthetic down through at least six generations to the present. In 2002, the Museum of Fine Arts, Houston, in partnership with the nonprofit Tinwood Alliance, of Atlanta, presented an exhibition of seventy quilt masterpieces from the Bend. ...


Unfortunatley, it seems that things did not quite work out as was intended. Last year I read this article and learned that there are disputes between the parties and a couple of lawsuits. From what I can tell, Loretta Pettway filed suit in Alabama Southern Federal District Court. Chief Judge Granade is handling the case. Today, I spoke to someone in the Judge’s chambers who declined to state her name. From what she told me, it appears that the parties may be trying to settle the matter and have until April 24th to do so. We’ll see what happens.

So far my quilt is made of scraps from old jeans and T-shirts. A bit of my history. I bought some new fabrics to add also after looking at more quilts on blogs. I have a sewing machine, but still have not used it. For now, I’ve been sewing by hand while I’m watching TV and it’s going surprisingly well and fairly fast.

I’ve been thinking a great deal about the meaning of history. It’s really just the documentation of peoples’ live and significant events. Some of which we may not appreciate the importance of until many years later. It’s Black History Month, which used to be just a week. I feel very strongly that Black History is American History, which should be discussed, learned about and shared all the time. History in general is important.

Some people may think learning about slavery is so far in the past and not relevant to their lives now. Especially if they are not black. I’ve been watching Part II of the PBS Series African-American Lives. It’s fascinating and I recommend that everyone see it. In the Boston area, it’s coming on tonight at 9:00.

A few days ago, I read an extremely interesting blog post written by Suttonhoo. I’ve mentioned her before and had the good fortune to meet her in person when I was in Chicago last summer.

Her post is about finding out that slavery is part of her family’s past and how to reconcile that knowledge with how she perceives herself and her family. Here is an excerpt.


“My mother's doing research on our family history and has traced down the fellow who kicked off her father's line in America -- the fellow Goochland, Virginia was named after. And, as you might suppose, having shown up in the 1600s, he became a landowner and a businessman and, goddammit, a slave owner."


As we move further into the 21st century, we Americans are on the brink of possibly electing our first black president. But we also have much history to learn about, personal and collective. I guess these are all pieces of the fabric that make up the ever expanding American quilt.

+ + +
Updated 4/1/2017: Lawsuits against and Atlanta art dealer were resolved in August 2008 according to this article. My quilt is finished! Take a look here!

Asha said…
HeHe!!I should use that title for all my posts!!

Yes, I have seen that movie, liked it.
American Quilts are unique art and tells each story wonderfully. I read that one wife of Iraq soldier who died there made a quilt with all his shirts left in his closet!!
2/13/08, 2:21 PM

Liz Dwyer said…
I really admire your taking up quilting. My mom is very crafty and gave up on quilting so I know it's no simple task. It requires lots of dedication, that's for sure.

History is so very important. Very neat story about that blogger finding all that out about her family. Knowing the history does make it real. I really don't believe we can face the future and overcome our racism unless we deal with our past.
2/13/08, 10:42 PM

AVIANA said…
nope i did not see the movie...

Tera said…
Anali the quilt is going to look awesome! And hey, did you know that last year, they had postage stamps in circulation wtih the Gee's bend quilts on each of them?!
2/14/08, 11:06 AM

I think I'm going to do one of those DNA tests. I don't know anything about my family beyond my Granparents.

I just wish we could see this kind of stuff year round!

amisha said…
this is such a wonderful post lisa. the quilters of gee's bend are an incredible inspiration to me... their use of color, the incredible designs, and the fact that they did all of this with very little... scraps and without access to the big fabric stores! it is truly amazing and so, so beautiful.
i am so happy for you that you are taking up quilting too. hand-sewing is so relaxing and great!
2/14/08, 4:06 PM

Suldog said…
I also saw that exhibit at the MFA. Very beautiful stuff.

The African-American lives show was fascinating. I'm constantly amazed at the fact that slavery could have existed at all. It is so antithetical to my own way of thinking.

One thing that amazed me more than any other was the fact that the South Carolina legislature was majority black following the Civil War. My assumption, upon hearing that, was that South Carolina as a whole was majority black. If that was the case, how in the hell did the Jim Crow-type laws get instated there within just a few years of that time? You would think it would have been impossible to trod so heavily upon the majority population. I'm sure there were many interesting mitigating factors. I'd love to see an in-depth exploration of that time period in that area.
2/15/08, 11:58 AM

Margie said…
Hi Anali
I have seen the movie, and loved it!
What a gorgeous quilt you are making.
I was talking to a friend yesterday about making taking up quilting.
Now, you inspired me to!

CapCity said…
Sistah Anali - I want to hear what u think of Ms.Bev Jenkins' book: The Edge of Dawn (she incorporates the historical meanings of quilts into a thrilling action romance!!;-)
2/16/08, 1:21 AM

los angelista - I didn't work on the quilt this week, but maybe next week! I'm hoping to have a finished quilt by May.

And I so agree about history. We can't fully understand where we are and where we're going unless we look at where we've been.

aviana - And here we go again with more primaries this Tuesday! What a rollercoaster ride this is!

Lisa Johnson said…
mes deux cents - Hi there! I'm really curious about the DNA tests too. You just never know what you'll find. And belated Happy Valentine's Day to you! : )

amisha - Thank you! Sewing really can be quite relaxing. Although, I have to learn to pay more attention and not be too relaxed, because I had to do a few squares over after sewing them on the wrong side! ; )

suldog - When I first heard about the majority black legislature I was really surprised too. I think that things changed when the lynching started. People were just too scared and that's when great numbers of blacks started moving north.
2/17/08, 12:18 AM

Lisa Johnson said…
margie - I'll be looking forward to hearing about your quilting! Maybe in a poem? : )

So So Simple said…
Hey Anali

How's your quilt going now? It has been a few days since your post. I guess with the chilly weather it is so cosy quitling at night.

Lisa Johnson said…
so simple - I haven't had a chance to work on it since! I hate to work on it for just one or two hours. I prefer bigger chunks of time, which I just have not had recently. Hopefully soon though!
2/24/08, 11:15 AM

Lisa Johnson said…
antonio - Welcome! Thank you for stopping by and good luck with your research! I'm looking forward to hearing what you find out. Feel free to email me too. I just happened to be checking my stats and saw a new comment.
3/20/08, 11:28 AM

Anonymous said…
Your blog post about quilting was interesting. I have a friend who has finished quilts for a living for years (people do the tops and send them to him to bind and topstitch). Anyway, a lady brought him large bags of her recently deceased mother's clothing and asked him to make memory quilts for her to give to siblings and grandchildren. Neat idea.
Onewally@aol.com-I cant get the google id to work today...
3/30/08, 12:11 PM

Lisa Johnson said…
anonymous - Welcome! That is the coolest idea!! I'm sad to say that I haven't done much quilting since this post. I just haven't had the time. I'm taking today off, so maybe I can do some work on it.
3/31/08, 1:12 PM