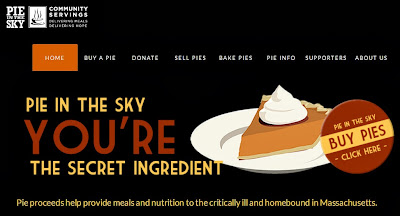 Community Servings, an organization that I wholeheartedly support, delivers nutritious meals throughout 18 communities in Massachusetts to 1,650 individuals daily who are living with a life-threatening illnesses.

Pie in the Sky is now in it's 21st year and is set to raise $600,000, their biggest goal yet! They are working with 150 bakers across greater Boston, so volunteers can sell 17,000 pies. Community Servings can feed a client for a week with $25, which is the cost of a pie.

Around Boston today, there will be free pie and coffee to help spread the word about Pie in the Sky! Here are some of the tasty events below.

Grab a free slice of pie and a delicious cup of Espresso Love coffee on your way to work! Staff and volunteers will be onsite to take your orders and answer all your pie related questions.

Local pie and cake master George Montilio made a giant pie that will be sliced up and given away. Bostonians are encouraged to stop by for a free slice of pie and delicious cup of JP Licks coffee.

Tweet and Facebook about Pie in the Sky (using #pieinthesky) and you may have a have a free pie delivered to your office!


When I think about the work that Community Servings does, it really hits home. When my mom was sick, I was able to cook for her. But what does someone do when they have nobody to help them with meals? The consequences could be dire.

If we were sick or a friend or a child were sick, we would hope that the most basic of things would be taken care of. Being fed. It's so simple, but it's everything. Especially when you are trying to heal.

Hopefully many pies will be sold to help continue this good work. I thought the quote above by JFK was quite apropos.

Since, this week is the 50th anniversary of JFK's death, I'm doing some JFK related posts.  I wondered if I could find anything about JFK having to do with pies. Well, I actually did. Sort of. Pie. Cake. It's a fine line here in Massachusetts.

I found a National Park Service document called “The Crowning Glory”: Boston Cream Pie. Here's an excerpt of the history of Boston Cream Pie from the website with some added links.


Two layers of sponge cake held together by vanilla pastry cream and topped with fudge frosting. People often wonder about the name of this dessert that more closely resembles a cake. Some have speculated that in early America, pie plates were more common than cake pans, and therefore were more likely to be used. Others suggest the line between “cake” and “pie” was very fine, leading to a class of desserts called pudding-cake pies.

Whatever the origins, Boston Cream Pie as we know it today was invented by pastry chef Sanzian in 1856 at the Omni Parker Hotel in Boston. In 1996, Boston Cream Pie became the official state dessert of Massachusetts.


So what does all this have to do with JFK? Well, it has to do with some words from JFK's mom.


Rose Kennedy, the president’s mother, remembers that Boston Cream Pie was always “the climactic display” to a meal or outing. The treat often played a prominent role on train trips. Mrs. Kennedy remembers using food as a way to pass the time during these long journeys.

Having her children slowly eat through a number of courses built up anticipation for the final course of Boston Cream Pie, “the crowning glory and favorite of all.”


So it seems that our former President was practically raised on the stuff! Well, I may exaggerate a bit, but just maybe Pie Day in Boston might have been something that JFK would have approved of. Maybe he would have even bought a pie.