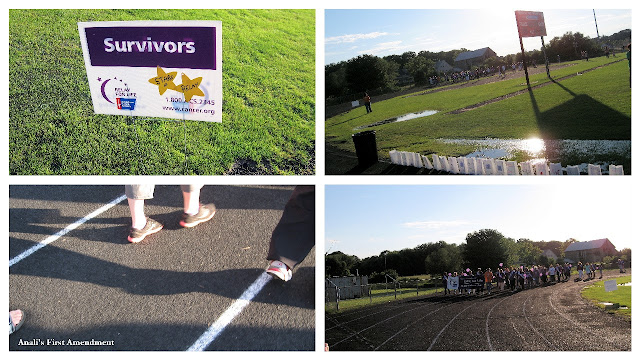 Back in June, I participated in a Relay For Life event with my mom. Most of us have heard that the American Cancer Society is the official sponsor of birthdays. I love that slogan! When I first heard it, it made me tear up.

Relay teams camp out overnight and take turns walking or running around a track or path at a local high school, park, or fairground. Relay events are up to 24 hours in length and, because cancer never sleeps, each team is asked to have at least one participant on the track at all times.

I didn't participate in the fundraising aspect of the event, but participated as a caregiver.  I've written about cancer before on this blog. My mother was diagnosed with breast cancer my senior year in college. Now she is a 27 year survivor!

She has participated in Relay For Life events over the past several years. When she was first diagnosed, people who had been through the same thing helped her by answering questions, offering her support and letting her know what to expect. Now she does that for others and this event is a way to meet other cancer survivors.

One of the most powerful parts of the event was when the moderator asked questions of the audience. She asked, "How many of you have been survivors for more than 30 years?" 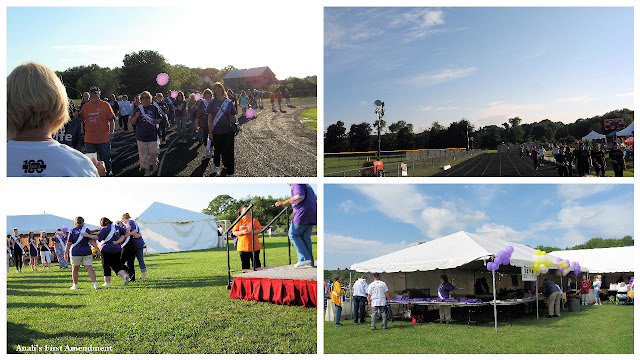 A cancer survivor is defined by the American Cancer Society as anyone who is living with cancer, from the date of diagnosis. If you've ever heard the words, "You have cancer," you're invited to participate as a survivor. The events also publicly recognize and thank caregivers for their support and commitment.

Another speaker spoke about caregivers. I thought I had written her name down, but I can't find it now. She wrote a book about caregivers and found they had similar things to say. Nobody had asked them about their experience and they were happy to share it with someone.

Also, she said that everyone experienced a violent physical reaction when they were told of their loved one's diagnosis. Like an actual blow to their body. I could really relate to that. When my mother told me, it felt like I had been hit in my legs. My knees buckled and I thought I was going to faint.

After the speakers, the survivors were asked to come up to the stage and say the type of cancer they had and how long since they were diagnosed. I was surprised that there were so many younger people. Several young women had been through multiple bouts with breast cancer.

We see people that we don't know walking down the street and they look fine. But we have no idea what they have been through. It really stops you in your tracks. So many different types of cancer. One woman walked up and she had a scarf on her head. She said that she had just had her last chemo treatment the day before.

Again, the reality of each person dealing with this disease really hits you. She started crying and walked off the stage and several women hugged her. I read this article recently about how not to say the wrong thing to someone who is a cancer survivor or caregiver. The main rule is comfort in and dump out. Here's an excerpt from the article below.


When Susan had breast cancer, we heard a lot of lame remarks, but our favorite came from one of Susan's colleagues. She wanted, she needed, to visit Susan after the surgery, but Susan didn't feel like having visitors, and she said so. Her colleague's response? "This isn't just about you."

"It's not?" Susan wondered. "My breast cancer is not about me? It's about you?" 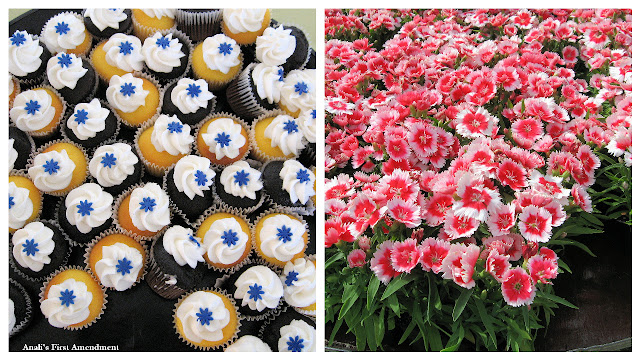 After everyone had spoken. The caregivers walked to one side of the track and the survivors walked to the other. Then we walked until we met in the middle. It would have been quite a heartfelt and emotional moment had I seen my mother. But as we were walking, she was on one side of the crowd and I was on the other and I didn't see her.

Anyway, we met up back at the survivors tent and had some very tasty cupcakes. What's an event without dessert?

Packard Farms donated these beautiful flowers for the survivors. I thought they were so pretty and such a good idea. We should enjoy lots of flowers now. All the flowers in the world at someone's funeral is not going to bring them any joy. Let's give more flowers to the living!

We left before the Luminaria Ceremony, which is an event where luminaria bags are lit up with a candle inside.  It looks like a beautiful event.


If you are anyone that you know has been impacted by cancer, then you might be interested in participating in a Relay For Life event. They are happening all the time in many locations. I'm glad that I did.

Flowers should always be shared with the living.
When one is gone, they cannot appreciate their beauty.

Lisa Johnson said…
margie - Thank you! Best wishes to your sister too! You both must treasure each of her birthdays even more now.
7/22/13, 1:43 PM