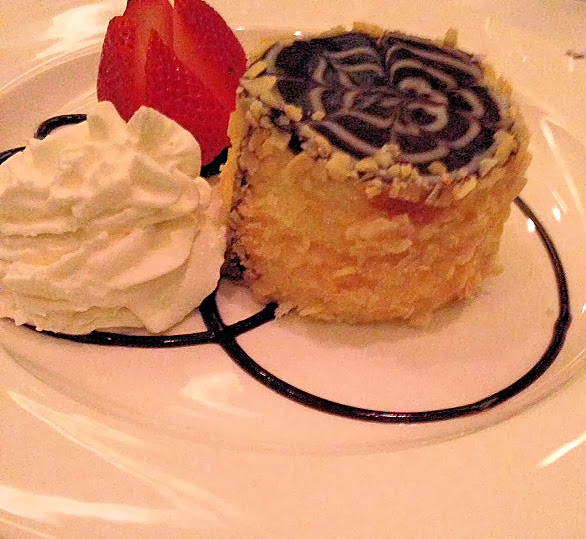 You know how sometimes the stars align for the perfect meal? Well, that's what happened last weekend when I finally got to meet Edi who blogs at Crazy QuiltEdi!

We've "known" each other online for years from our blogs and Twitter, but had never met in person. She lives in Indiana, so it wasn't like we were going to randomly run into one another.

But then a couple of months ago, Edi told me that she would be in Boston for a conference. We both really wanted to meet and decided to make it happen! She stayed at the Omni Parker House, home of the iconic Parker's Restaurant. Below is a bit of the history.


Since the late 1800’s, this venerable restaurant has built quite a prominent culinary legacy. From hiring the first celebrity French Chef in America, Chef Sanzian in 1855 to launching the culinary careers of Emeril Lagasse, Lydia Shire and Jasper White. Two cultural icons spent time on the Parker House staff: Vietnamese leader Ho Chi Minh served as a baker in the bakeshop from 1912-1913 and Malcolm X was a busboy in the early 1940’s during the Pearl Harbor invasion.

Last week, I wrote about JFK and Boston Cream Pie, so it was pretty fresh in my mind that the confection was created by pastry chef Sanzian in 1856 at this same hotel where she was staying.

How could I not take it as a sign that we should meet there for a fabulous dinner? Who am I to fool with destiny? Could a dinner ever be more bloggable?

So Edi brought her friend Kekla from the conference, an award-winning author of many books for children and young adults by the way, and we had the best time!

The food and conversation was amazing and we literally were the last people to leave the restaurant. We would have stayed longer, but they were closing. I was listening to a radio program about the history of American meals and how allegedly Americans don't linger over meals. Well, we lingered!

Before I forget, let me make sure to give you these links from the website. These are the real deal! The recipe for Boston Cream Pie and the recipe for Parker House Rolls. Also, here is a link to the current dinner menu. I had the scallops. Delicious! Of course the rolls were silky soft and wonderful. Also, you can buy them and take them to go if you like.

Let me say this; nothing here is inexpensive. One meal will probably be $50.00 at the very least. For me this is a huge extravagance that I can barely justify at the moment, except that I'm blogging it. But it's definitely worth it for a special occasion. Plus, there is so much history. Food history. Boston history. American political and especially presidential history. We saw Table 40, where JFK proposed to Jackie.

Plus, there's major literary history. I just read this and learned a lot. See an excerpt below.


The Saturday Club, a group of the brightest luminaries in American’s Golden Age of Literature, made the Parker House its home. Here Longfellow drafted “Paul Revere’s Ride,” the idea for the Atlantic Monthly was born, and Dickens gave his first American reading of “A Christmas Carol.” Other members of the Saturday Club included poets Ralph Waldo Emerson and John Greenleaf Whittier, novelist Nathaniel Hawthorne, and Dr. Oliver Wendell Holmes.

One thing that we all noted was the feel of the place. The crystal chandeliers and shiny dark wood paneling bring you to another time. We weren't quite sure when. Maybe the 20's, 30's or 40's.

The food seems to be a modern twist to the classics based on how it's plated and this website description as well. "Executive Chef Gerry Tice celebrates nostalgic cuisine with contemporary flair at the birthplace of Boston Cream Pie, the Parker House Roll and Boston Scrod."

The Boston Cream Pie was different than what I expected. Whenever I normally have it as a dessert, it's rather simple and almost rustic. Sometimes the filling is running out of the sides and the chocolate is messy too. Of course, at Parker's Restaurant it was a pristine work of art. It was delicious.

But I have to confess that it was a bit drier than I prefer. I like all that sloppy filling and gobs of chocolate.

One other thing that we all noticed was the music. First, I was surprised that there was any music. Second, if I had imagined the music that might be there, I would have thought maybe live piano or if piped in then classical or light jazz.

I was surprised to find myself hearing Toto, Sting and several songs from different eras. It wasn't too loud and actually was a rather nice mix and quietly comforting. We all noticed it and had to find out more. The host told us that it was a Muzak station called Reflections.

Maybe that surprising comfort was one of the many reasons why this group of Americans did linger over our meal.

*Updated* Edi wrote up a post too and you can see it here.

Anonymous said…
This was such a fun evening and hard to believe it was a full week ago! The amount of history in that one room is incredible!
11/30/13, 6:18 PM

Penny said…
Isn't it fun to meet the people you get to know through their writing online. You have tempted me to get to the Parker house and taste those rolls and the Boston Cream pie.

I haven't had either in years, back when I worked at Jordan Marsh and vendors would take us for lunches and dinners in restaurants all over Boston.

Lisa Johnson said…
penny - Great to see you here! I so agree. Getting to meet other bloggers in person is one of the best things about blogging.

I miss Jordan Marsh. My mom worked at one for years too. It's so strange to think that a new generation growing up here now has never been in one and probably never even heard of it!