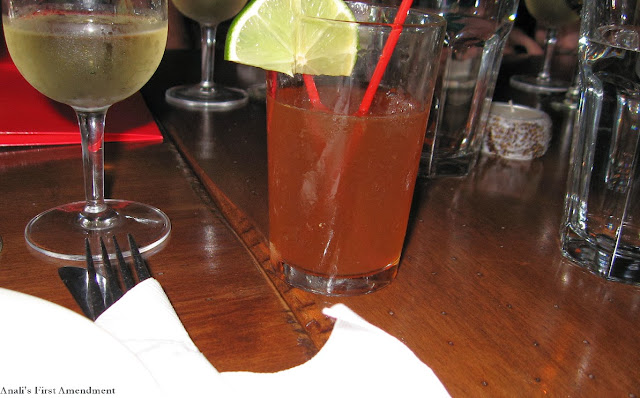 Back in August 2010, my friend and I visited a cafe. As we were leaving, I walked around the corner and saw this stunning mural. That was my first encounter with Taberna de Haro. At the time, the restaurant was closed, but I thought it looked good and hoped to go there one day.

Fast forward three years to early this summer. I was invited to a blogger event to celebrate one year since Taberna de Haro expanded their restaurant. We were allowed to bring a guest, so I brought my cousin (surrogate big sister) with me. It's always fun to hang out with her!

There is outdoor seating in the front of the restaurant and the interior is cozy with deep rich colors. The new side of the restaurant includes the bar and we were welcomed with a cocktail called La Cola Nostra made by bartender Devon Burroughs. It was made from Averna, Rhum J.M., lime juice, simple syrup, house-made pimento dram, topped off with cava.

Chef-Owner, Sommelier Deborah Hansen introduced herself to us and noted that it was also the restaurant's 15 year anniversary. That is quite an accomplishment. The restaurant industry is tough. Especially in the Boston area. There are new ones popping up all the time and many closing as well. Plus, being a woman, I'm sure she's had to deal with a lot. I admire all that she's done. 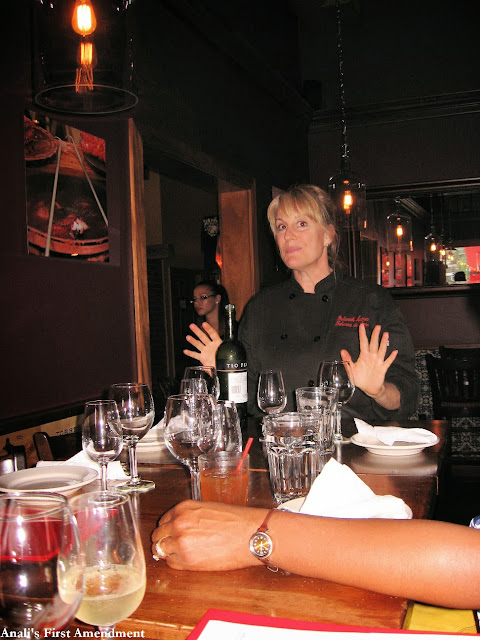 Hansen mentioned how when she first opened the restaurant, if a restaurant got a review in the Boston Globe, it would be filled with reservations for weeks. But now that is not the case, she said. "Food bloggers and other writers on social media are the ones who help business."

I must say that I had some mixed feelings after that. I wonder what the expressions on our faces looked like. She quickly said that change is fine and she is adapting with the times. When my cousin and I spoke after the event, we both felt like Hansen was thinking rather mournfully that it's now come to this. She has to deal with food bloggers. The humanity!

I feel bad. Yes, times have changed. Much of the change is not fair. Jobs are getting outsourced overseas. I really wish that were not happening.

A lot of the restaurant business is getting the word out, so marketing and promotion is very important. I have to agree with her. It's not fair. She should be free to cook and focus on her art. But that's not the world we live in....

Anyway, we moved on to what is Hansen's true passion. She visits Spain every year, loves all things Spanish and is intent on providing authentic Spanish cuisine. She is NOT a fan of fusion cooking and you will NOT find ginger in her restaurant. Whoa!

We were served a variety of tapas. I really liked the fried fish, stuffed squid, fried potatoes with hot sauce, and bread with anchovies on it.  I don't eat meat, so I didn't have the chorizo, but it was served as well. Both my cousin and I were surprised to see it, because we had always considered chorizo Portuguese and not Spanish. But it is both. 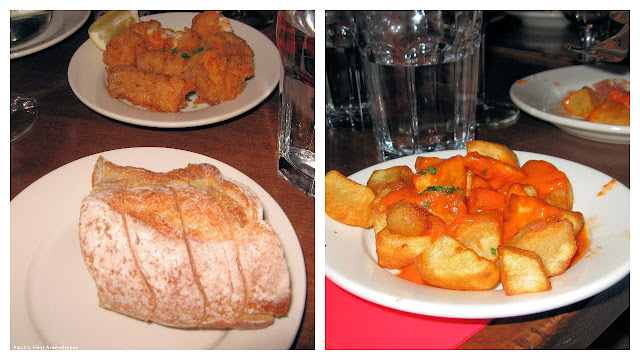 Another thing that Taberna de Haro really focuses on and may do better than most other restaurants is sherry. It's always amazing to see what makes a person's eyes light up. When Hansen talks about sherry, her eyes light up. The restaurant has 325 wines. All Spanish of course. 44 of them are sherry and manzanilla. Below is a beautiful excerpt from the website.


Sherry is either utter miracle or pure science, depending on your faith. I've been to Jerez twice in the past 10 months, and I'm more enchanted then ever - and more convinced Sherry is both. Old, wizened Jerezanos explain the yeasty process to me, and I believe in miracles. Then the young blood of the zone, dynamic and bi-lingual all of them, explain the details to me, and I fully grasp the science. And when they plunge their venencias into a barrel, breaking the layer of flor with a pleasant little pop, and deftly pour me a glass of young fino or venerable palo cortado, I'm just a plain believer in all things wondrous.

Is that true love or what? I had never tried sherry before and was pleasantly surprised. It was light and smooth. Not too dry at all, which I had feared. I liked it more than I would have thought. If sherry is your passion, then you owe it to yourself to go to Taberna de Haro. Have a few glasses and ask to speak with Hansen!

Now one last thing that got me. My passion is dessert. It makes my eyes light up. Most hours of the day, I'm thinking about dessert. Thinking about making it or thinking about eating it. Sadly, I'm usually not actually eating it.  I mentioned before how I might have anger in my heart if I had to give up dessert.

Whenever I go somewhere to eat, I'm wondering what the dessert will be. I was very disappointed here. Spanish dessert is awesome! Flan. Churros. I had been excited for weeks thinking about what our dessert would be! I remembered a wonderful dinner and dessert at Cafe Sevilla in San Diego with my mom many years ago. Plus a flamenco show. But I digress.

After we ate, I kept wondering when the dessert would arrive. It did not arrive. To make matters worse, I saw a very delicious looking flan being carried by a server to someone outside. Whaaaaat??!!

Taberno de Haro has dessert. It looks awesome. We just didn't get any. I have to tell you that my feelings were hurt and there may have been some anger in my heart. I have been to many food blogging events over the years and cannot recall another one where we were not offered dessert. There is always dessert. I'm not sure what to make of that. I would not invite someone to my house and not offer them dessert.

Anyway, I know in the greater scheme of things, it's a ridiculous first world problem. But really? No dessert?

+ + + + +
Disclosure: The meal was complimentary and I received a restaurant gift card, which was given to my cousin to use for a raffle giveaway.