A Is For Apple. B Is For Brother. 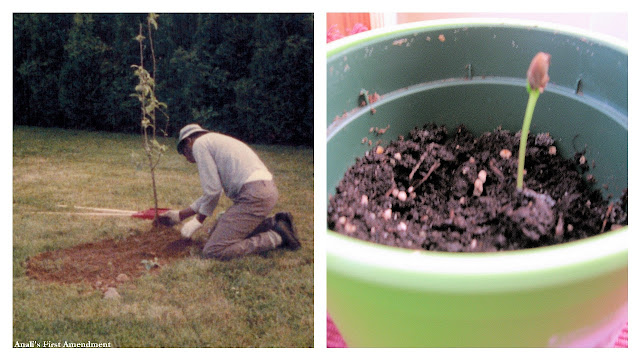 A few months ago, my parents had their apple tree cut down. It was so sad. It was diseased and becoming a hazard. The picture to the left is my father planting the apple tree back in 1987. I'm so glad I took pictures! I remember that day. I was so excited and looking forward to seeing it grow.

The apple tree was a gift from my maternal grandmother to my father after his mother died. We called it the grandmother tree, because it represented both my grandmothers.

Over the years, the tree grew and grew. It was tall and full. The apple blossoms were beautiful and the apples were tasty.

My father has never been a huge cook. Whenever there was a barbecue, he would cook. I guess because it was outdoors. He started making a rice dish sometimes when my mother was going through chemo. Outside of that, not so much.

So when he decided to make apple sauce one day, we were all more than surprised. It was the first apple harvest from the tree. I'm not sure how long it took to get apples. Maybe around five years. But he picked the apples and made us all a treat. After that, I realized that anything can happen!

I wish I had a picture of the tree in all its glory. Maybe there are a few around, but I'm not sure where at the moment.  I've been missing that tree. Now there's just a stump and that spot on the lawn feels so empty.

Maybe that's why a couple of weeks ago after I ate a Braeburn apple, I wondered what would happen if I planted the seeds. That is how apple trees start out after all. Maybe I could get us another apple tree. So I tried it. And now I have a sprout!

I was so glad to see it growing and have some happy news. The past couple of weeks have been tough on my family. My brother especially. He has been in and out of the hospital and right now he is in again. He's my only sibling and we have been through so much together.

He's doing better, but I'm still saying many prayers and hoping things will keep going in the right direction. Have a good weekend and give your brothers and sisters a hug!

El said…
Beautiful story about your dad and the tree. Terribly sorry to hear about your brother. I hope everything works out ok and that he's well soon!
8/24/13, 10:44 PM

Lisa Johnson said…
nichole - Thank you. He's doing better, but has to be in a rehab facility for a few days before he can go home. Still not quite strong enough.
8/27/13, 9:22 PM

Can-Can said…
How wonderful that you have the photo of your father planting that apple tree! My stepfather cooked rarely but when he did it was so special to my siblings and me - I can still remember most of the menu.
I hope your brother continues healing. My brother and sister both live in St. Louis as does my mom and extended family. We all more consciously love each other up electronically, by phone and in person whenever we can.
9/2/13, 12:01 AM

Lisa Johnson said…
can-can - Love that! "Love each other up electronically." It's so important to stay in touch. My brother is so much better and home now. Thank you for the good wishes! We saw The Butler yesterday with my father. My mom already saw it. I don't have enough words to describe the movie. Just wow! Amazing.
9/2/13, 9:47 AM