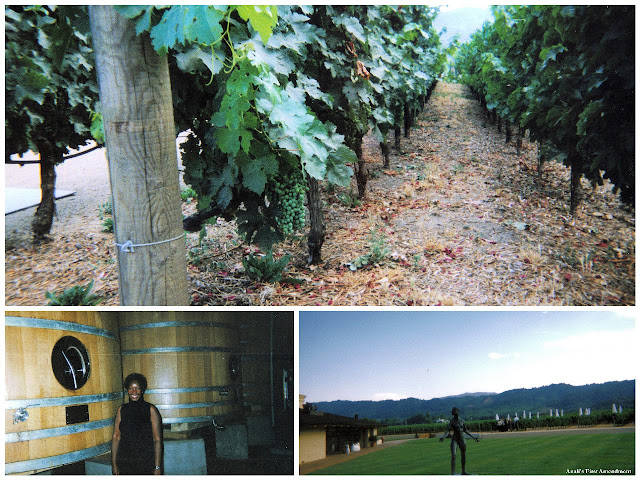 It's interesting how things happen. A few weeks ago, I was on Twitter and saw this tweet about the 100th Anniversary of Robert Mondavi coming up. It took me back several years to the summer of 2002 when I visited the Robert Mondavi Winery.

Back then my life was on a very different course. For better or worse, I don't really know. Maybe ten years from now I'll have an answer. But things have been much more difficult for me in the past several years than I could have ever imagined back then. Then again, more opportunities have also opened up to me than I could have imagined.

Either way, life is very different for me now and sometimes I can barely recognize it. Maybe that bittersweet feeling is why I did not retweet. I almost didn't want to think about that time, because it was too painful.

Life has a way of making you confront certain things, even when you don't want to. Because it keeps showing up. I saw the tweet and ignored it. Between being caught up with the Supreme Court decisions, our special Senate election here in Massachusetts, the filibuster in Texas and writing my reaction to Paula Deen, I hadn't given it much thought. By the way, don't let the title of the post fool you. I just didn't think she deserved to have her name in the title of the post.

Then I read this article, Moscato Finds A Younger, Hipper — And Browner — Audience. Really? Are we going there again? I just wrote about Paula Deen. Damn.

Well, I've written about sweet wines on this blog several times. I love sweet wines. I enjoy moscato, riesling and gewürztraminer too. So, I copied the link to the post and figured maybe I'd write about it at some point, because I felt rather offended that what was being put out there for people to believe was that people of color like moscato because of rappers and hip-hop.

Also, I generally dislike the notion that it is a sign of an immature or uncultured palate to prefer sweet wines. I don't believe that and think it's just a preference. Anyway, I digress.

So I wasn't going to write about this yet, then I was at a blog event today and someone asked me what I thought about the backlash against the NPR article. I hadn't heard about the backlash except for my own, but then this article was forwarded to me. Thanks Molly! But damn.

Well, the Universe won't let me escape from writing this post, so I'm writing it. In the summer of 2002, I attended a seminar at UC Davis for several days for my job. It was a great trip and along with classes there were different fun events that they had for us.

One event was a tour and dinner at Robert Mondavi Winery. Looking back, it was like a food blog event, except that food blog events didn't exist yet. The pictures above were some that I took from the trip. So glad I took pictures!

The dinner was amazing and we got to try many different types of wine. It was at this winery dinner, sipping some Robert Mondavi wine with my dessert, that I discovered my love for moscato. Drake had nothing to do with it.

June 18, 2013 marked what would have been Robert Mondavi's 100th birthday. If you're in California, UC Davis is celebrating this milestone with a new library exhibit showing Mondavi's papers. The exhibit is free and open to the public until December.  Robert Mondavi became one of the most influential figures in the American wine world in the late 20th century and the exhibit will show how he rose to prominence and how he saw his role in promoting wine, fine food, and the arts.

+ + + + + +
*Updated 6/30/2013* I forgot to add this yesterday. From what I understand, Google Reader ends tomorrow on July 1, 2013. If you're looking for ways to follow this blog, you can subscribe with a feed from Feedburner, or use bloglovin'. You can also follow posts by *Liking* my Facebook page or following me on Twitter.