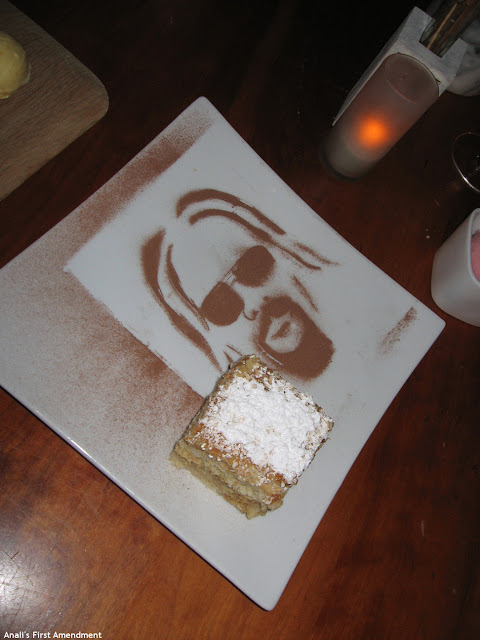 Have you seen The Big Lebowski? I've never seen the movie, but I've eaten the cake.

Eating the cake was when I first learned about the movie. I was at a food blogger dinner in May 2011 and it caused such a stir at the table when it was brought out. Where's The Cake Lebowski is a white Kahlua cake with cocoa powder dust and toasted coconut.

Now unlike most other desserts, cake is not only delicious, but the conduit by which many things in life are revealed. Stay with me now.

It's how we mark momentous occasions. Weddings, birthdays, holidays. Big happy celebrations culminate with cake. I've never heard of a funeral cake. However a certain beheading does morbidly remind us of cake.

Now for me, at the time of the cake, little did I know, that several months before when I visited Greyston Bakery, the two events would relate a couple of years in the future. And the future is now.

Well, actually about a month ago. I was listening to an episode of On Point, where actor Jeff Bridges and American Zen Master Bernie Glassman were interviewed about a book they recently collaborated on called The Dude and The Zen Master. Jeff Bridges is the star of The Big Lebowski. Bernie Glassman is the founder of Greyston Bakery.

Worlds collide! Well, at least in my head they do. I'm not sure what it means, but I thought it was interesting. I really want to read this book. Especially since I started a regular meditation practice. I'm trying to be generally more zen and less attached to the outcome of things.

Oh, and I just put The Big Lebowski on hold at the library. So I'll be seeing it soon.

Have a great weekend!

*Updated 5/4/2013* Since I'm doing a bit of updating blog posts about movies today, I figured that I'd update this one as well. Sadly, I am not a fan. It's a cult classic and I can sort of see where the zen thing comes in, but in all honesty, I would not go out of my way to see this movie. When I add Another Earth with this one, it comes down to about 4 hours of my time that I cannot get back. Live and learn.....

Chris O said…
This cake sounds delicious!. Have heard of The Big Lebowski but haven't seen it yet. After reading your post though I will have to see if our library has it. Thanks for a great post Lisa. Wish I had a fork!
2/21/13, 4:53 AM

Lisa Johnson said…
chris - Glad you enjoyed it! My movie just came in, so I'm hoping to watch it this weekend. Probably during our next snow storm!
2/21/13, 9:59 AM