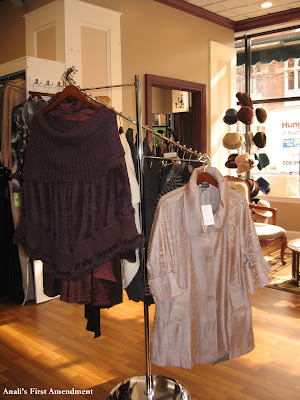 From my last few posts, you might have noticed a theme? The Fridgecouch made by a New Bedford artist and the video of a Portuguese Feast in New Bedord. The city of New Bedford!

Recently I visited for another article that I was writing. The last two times I visited New Bedford, I didn't get much of a chance to walk around. This time I made it a priority after finishing my work. I parked my car at a meter and had about an hour to wander a bit.

After looking in the window, Celia's Boutique on William Street quickly drew me in. It's bright, cheerful, and filled with beautiful designer clothing, accessories, and jewelry. The owner Celia was so friendly and welcoming! We chatted for a bit and after buying a lovely pair of earrings,  I told her that I was hoping to try some Cape Verdean food. 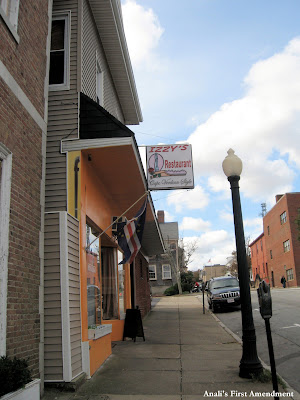 She recommended that I try Izzy's Restaurant, which was a quick walk down the street and around the corner. If you're in the area, definitely try this place! It's very small and casual. You'll get a lot for your money and the food is great!

Unfortunately they were out of dessert, so no sweets for me, but I had some very good chicken soup and tuna pasteles.  The pasteles had seasoned tuna inside a fried dough.

I took everything to go and shared it with my parents. The drive there was brutal. The aroma in the car made me want to pull over by the side of the road and eat everything myself! Luckily I do have some restraint and decorum. : ) 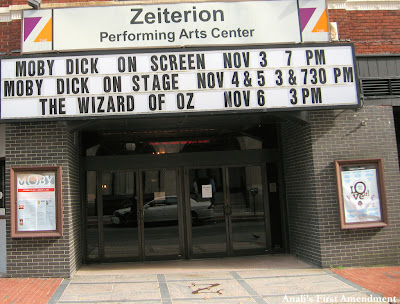 When I was walking around, I also saw the Zeiterion Theatre. I took a picture of the marquee and noticed that they were showing Moby Dick. When I told my mother, she said that she was going there with a friend to see it. Such a coincidence! She really enjoyed it, by the way.  Now I have another old movie to see!

And speaking of whales. An article that I wrote about the New Bedford Whaling Musuem was published last month. If you're in the general area, you can read the article online here.  I had the best time visiting the museum. Until my tour, I hadn't realized that the whaling museum is part of National Park Service.

There was so much to see and write about, but I had a strict word limit and there was so much that I couldn't mention.  One of the coolest things about the museum, at least to me, is all the programming that they have.

Did you know that every year they have a Moby-Dick Marathon? They are celebrating their 16th year of the marathon from January 6 - 8, 2012. So if you want to read Moby Dick with lots of other people nonstop, make plans for your chance to do it soon. I'm sure you'll have a whale of a time!

Unknown said…
I saw that you commented on Cup of Jo's giveaway for the necklace...I am doing a similar one & I think you would love it! Come check it out...