Happy Halloween + My Encounter With Zombies! 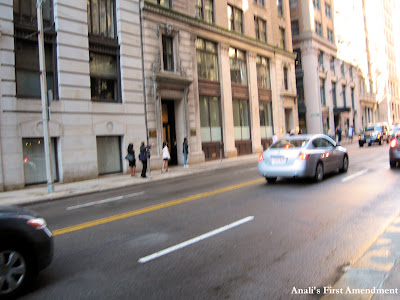 Does this look like any ordinary street to you? It's not! The people are movie extras, because they are part of one of the Boston sets of the movie R.I.P.D., which has been filiming all around the Boston area. The picture is a bit blurry, because I was being rushed through the set as I was taking it.

The abbreviations stand for Rest In Peace Department. The movie, which stars Ryan Reynolds, Jeff Bridges, and Kevin Bacon, is about a police officer who was recently killed and joins up with a team of zombie cops, so he can find who murdered him. 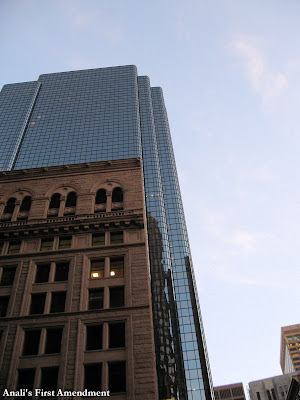 See the tall glass building here? That's where I was working for several weeks. Since I was working Saturdays and Sundays too, all of us in the project had to walk through the movie set to get to work. Several times, the crew had to escort us through the set, because they were filming and nobody was supposed to be there. From what I was told, one day there was even fillming in the lobby and on the roof!

While working, we'd hear the Director giving directions and cars crashing. At certain points, a gigantic light was shining in our office and camera equipment was hanging right outside our window. It was strange to say the least, but added a bit of excitment to our working weekends. 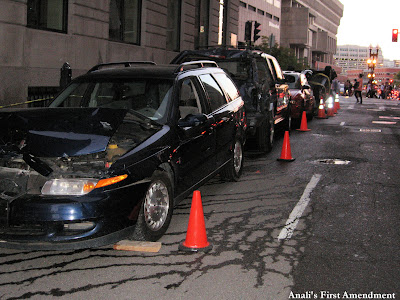 The picture above is a row of crashed cars that they kept on the street for filming the next day.

A few scenes had Ryan Reynolds holding a gigantic gun and pointing it up at us. The extras were running around looking and pointing up, because from what we could tell, there were supposed to be zombies climbing up the building.

It will be interesting to see all the CGI that's added when the movie comes out. Hollywood East appears to be in full effect! This is the second time I've had to go through a movie set to get to work.

One of my co-workers commented about the way the extras were dressed for the movie. She said, "If this were a real Boston scene, half these girls would have flip-flops on and everyone would have a cup of coffee. That's what I see everyday on the Red Line." We do love our coffee and flip-flops!

There definitely has been quite a bit written about the way people dress in Boston. GQ named us the worst dressed city in America. A bit harsh to say the least. But we did have to agree about the way the extras were dressed. They didn't look like actual Bostonians going to work. And maybe that scares some people more than actual zombies.

Tracy said…
haha... Very FUN, Lisa! Although not fun that quip about Bostonians being the worst dressed... surely not! Thanks for the sign up to my newsletter. I just sent it off to you, and hope it adds a tiny bright spark to your day. I'm slow to visiting everyone these day, for which I am sorry... Life & creative happening all over the place. It's good though. :o) Happy Halloween ((HUGS))
11/1/11, 7:45 AM

Nance said…
Cleveland has been the set of a couple of big budget films lately, too. The Avengers and I, Alex Cross, most recently. Spiderman was here a little over a year ago, and there are more in the works. It makes for some interesting scenery!

SE'LAH... said…
waaay cool!!!! you have the best experiences around town.

Lisa Johnson said…
josephine - It was pretty cool, but surprising how much waiting around there is. So much down time between the exciting parts!

mr. lonely - Thanks for the visit!

tracy - Love the newsletter! Congratulations! I'm so behind on my blog visits too. No need for you to explain. We all do what we can do. : )

nance - It is a nice change of pace for those of us not used to it. LOL! Sorry about the flip-flops. Now I remember your pov about wearing sweats outside the house too! ; )