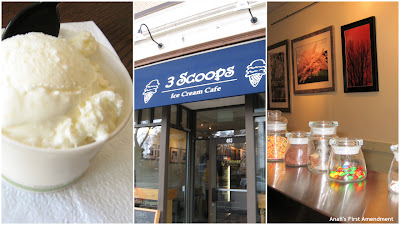 It all started a couple of weeks ago with a very nice email from Deborah. She invited me to an Open House to celebrate the opening of 3 Scoops for the season. 3 Scoops is an ice cream and dessert cafe in Brighton.

My cousin went with me yesterday afternoon and we arrived just before it started pouring rain outside. It was good timing in more ways than one. Now life isn't all butterflies and rainbows. But every once in a while, it actually is.

On the wall inside 3 Scoops, they have beautiful art work and a wall of paper butterflies. So pretty! And on the drive home, we actually did see a rainbow. I've mentioned before that I stop for rainbows, so we pulled over and took pictures. 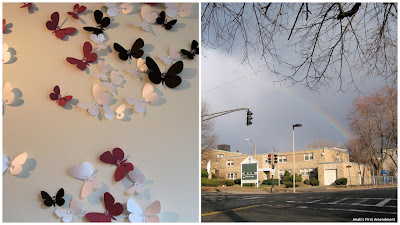 Now back to 3 Scoops. They have over 50 flavors of ice cream, frozen yogurt, sorbet and non dairy frozen treats. All of their products are handmade, artisan, and organic, made with fresh ingredients from local farmers.

My cousin and I tasted a bunch of different flavors. Too many to remember them all. Several were vegan including rasberry sorbet and coconut. I really loved the coconut and had a small cup of it. After all the tastings and eating macarons just hours before, I could only eat so much. I would definitely go back for more!

Along with all the frozen desserts, 3 Scoops serves mini pies. Both my cousin and I took one to go. I had half the pie for breakfast this morning with some coffee and a soy sausage. It was perfect! Very decadent. But there's no crime in having pie on a Sunday! Not too sweet and very appley. You don't even need ice cream or whipped cream to go with it. 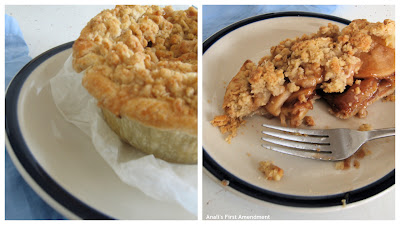 Now the rest of my experience at 3 Scoops was rather mysterious. I was hoping to meet Deborah, since we had emailed a few times. I never did.

This man seemed to know a lot about the Boston ice cream market. He said that he didn't work there, but he was helping out for the day. Hmmm... Okay...

I asked if he was one of the owners. He said that he wasn't. So I started wondering just who was this mysterious man. I asked his name. Since he was making many of these special flavors and was obviously in the know about ice cream. He said that he couldn't tell me his name. He has a side business, but that was a separate thing and this event wasn't about him. Then he said that his name was Raoul. Hmmm... Okay... Really?

He said that he makes vegan ice cream and often incorporates West Indian flavors. "Raoul" mentioned a vanilla cucumber flavor. Interesting. We had sampled peanut butter + jelly and mudpie too.

So my cousin and I are sitting and talking, when "Raoul" starts walking out the door. I thanked him for all his help and the great ice cream. I had asked for a business card, but he said that he couldn't give it to me. It would be a conflict of interest. Well, he was very loyal to his client. 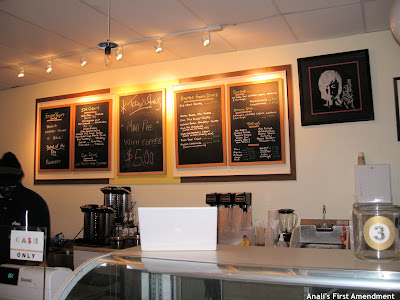 But I'm a very curious person. So when I got home, I Googled like crazy. Nothing. Raoul? Really? No.

I knew it! When I Googled Boston, vegan ice cream, I kept coming up with Wheeler's Black Label Vegan Ice Cream. A few more searches and it all seemed to come together.

While I guess I cannot be 100% certain, because he didn't tell me his name, but I believe that the mysterious man behind the counter was Wheeler del Torro, founder of Wheeler's Catering & Frozen Dessert Company, author of The Vegan Scoop, and private dessert chef to the stars.

Another dessert mystery solved! And thanks for the ice cream Mr. del Torro and 3 Scoops!

El said…
Sounds like you had quite a mysterious interaction. Interesting flavors too!
4/4/11, 9:58 AM

I Thought I Knew Mama said…
Yum! I'm going to have to check this place out! It's not too far away.