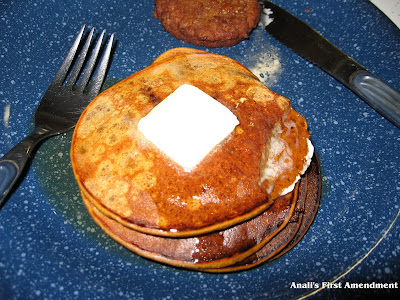 All week, the remainder of the pancacke batter from this fiasco has been an albatross around my neck. I couldn't just dump all that batter. Way too much food to waste. This morning I've been pretty productive. While I was baking chicken for my lunch, I revived the pancake batter.

Part of the problem before was that there was not enough seasoning. I added a lot more nutmeg, cinnamon, and cloves. I added some molasses, another egg, almost another cup of white flour to even out the wheat flour and the liquidy part from some vanilla yogurt. Would that be considered whey?

I had the the pancakes for breakfast and really enjoyed them this time. I'll try this recipe again, but I think I'll leave out the chocolate-chips. They added some bitterness and seemed to detract from the other flavors. I may also only use white flour or half the amount of wheat flour. And I'll use more pumpkin.

As a back-up, in case these pancakes were horrible again, I took pictures of the contents of my fridge. In March, I did a similar post. Interesting comparing the contents.

I am thankful to have enough food to eat. My brother volunteered at a food pantry the other day and people were lined up all day to get food. For a country that has so much, there are far too many that do not have enough.

Nance said…
That's the problem with adapting recipes. The chemistry is off. And baking is all about chemical reaction. But sounds like you were able to goof around enough to salvage it this time. What is your contribution going to be to Thanksgiving dinner?
11/17/07, 4:29 PM

CapCity said…
those panny cakes look too tasty, Anali! unfortunately, i'm on restriction from sweets....my nutritionists (yea, i got several opinions cuz i was hoping they were all wrong;-) say that if i don't want to develop "sugar" (southern for diabetes;-) i need to ease up off my sugar intake. *SIGHHHHH*...so, no dessert for me this hollerday season:-(....but, they didn't say no alcohol, so i just won't have sweet drinks = martinis anyone? ;-)
11/17/07, 4:49 PM

KAYLEE said…
They look yummy! How are you anali?
i would try them but, like Cappcity said: I have diabetes so i have to watch my sugar levels!
plus, i can't have eggs allergic! I havent fainted for 2 days or been in pain that has to be good right? i am on new medication that has helped!
11/17/07, 5:22 PM

Jazz said…
Your fridge makes me want to clean mine out. Or buy a new one! We have one of those small side-by-side ones, its always over-crowded.

Lisa Johnson said…
nance - You're so right! When the science is off, then it all falls apart. And I'm no scientist! : 0

For Thansgiving, I'm bringing my gingerbread and then just buying some things. When I brought my Election Cake to brunch about a month ago, my cousin told me that it was good, but he hoped I knew I still had to bring gingerbread to Thanksgiving! : )

capcity - That will be hard, but you can maybe adapt some things with Splenda. I really love the stuff. I'll have to try and figure out some recipes that maybe you could try.

kaylee - I'm much better than this time last week. Thank goodness! I'm glad you're better too. I didn't realize that you were also diabetic. I have to figure out some recipes with less sugar. It's hard though because there are different levels of sugar that people can tolerate. I'll have to work on it.