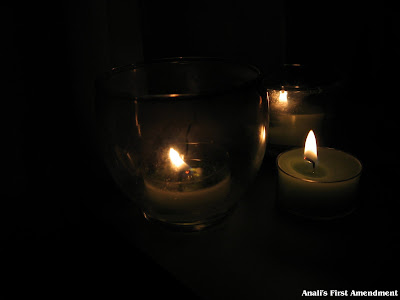 Over the past few days, I've been listening more and more to the events unfolding in Pakistan. Thousands of lawyers have taken to the streets to protest Pervez Musharraf's imposition of emergency rule. From what I've been reading, the lawyers have been beaten, arrested, and many are still being held in jail.

My co-workers and I were saying how scary it was. I started thinking about this post that I wrote last year and the quote from Shakespeare's Henry VI (Part 2), "The first thing we do, let's kill all the lawyers."

I've been feeling like we American attorneys should be doing something in solidarity, but I wasn't hearing anything. I found an interesting post on the WSJ Law Blog. Shouldn't we be marching in the streets in solidarity with them? Or something? They are putting their lives on the line for the rule of law.

I found that on November 5th, the American Bar Association issued a statement. Here is a portion.

"Since Saturday, President Pervez Musharraf of Pakistan has suspended the national constitution, detained eight members of the Supreme Court and arrested more than 1,500 Pakistani lawyers.

This is a profound breach of the rule of law. The American Bar Association urges President Musharraf to rescind these actions immediately. ...

The ABA, which represents more than 413,000 members worldwide, has a longstanding commitment to advancing the rule of law. When a nation’s constitution is suspended, and its Supreme Court is shut down, that is a blow to the rule of law everywhere.

The ABA therefore calls on all governments, bar associations and other civil society organizations to support the rule of law, by using every peaceful, legal means to persuade President Musharraf to restore justice to the people of Pakistan."

I also found that on November 6th, the Boston Bar Association issued a statement.

"The imposition of martial law in Pakistan is a painful reminder of the fragility of the rule of law. The detention of 8 members of the Pakistan Supreme Court , and the arrest of over 1500 Pakistani lawyers is a deplorable affront to a previously independent and vigilant legal system. The Boston Bar Association joins in the call of the American Bar Association and others for the immediate restoration of the Pakistani legal system. These events should remind lawyers everywhere that the rule of law can never be taken for granted."

I don't know what I can do, but at the very least, I hope that the attorneys being held in Pakistan and all of the citizens know that we are thinking of them. We hope for their well-being, safety and that the rule of law wins out.

andrea_frets said…
I heard the same thing about the attorneys being arrested and beaten and wondered what we as attorneys can do. So many jokes are made about attorneys but it is people like the ones in Pakistan who show what being a lawyer should really be about: standing up for justice.
11/7/07, 1:46 PM

Anonymous said…
There is too much at stake for American lawyers to sit idly by and just "see what happens." We need a coherent strategy for helping restore rule of law in Pakistan without emboldening jihadists seeking to exploit Musharraf's takeover of the legal system. Pakistan's nuclear arsenal makes it imperative.
11/7/07, 2:54 PM

Lisa Johnson said…
big boys oven - I do hope so too!

asha - It was a very big mistake! Things could come to a head very soon.

andrea_frets - Welcome! It's so true. I think most of us went to law school hoping we could do some real good and make a difference and they are really doing it.

tera - Welcome back! I know it's a serious one. Sometimes life is just like that...

anonymous - Welcome! I agree that the wait and see approach has not been working out too well.

starry nights - It really is...

Nance said…
Once again, the US has backed a dictator who turns around and becomes an embarrassment to our foreign policy. When will we learn? This is so dangerous and threatens not only the region, but more stable governments and economies. What a mess.
11/8/07, 4:15 PM

sognatrice - Thank you. I wish I had answers too...