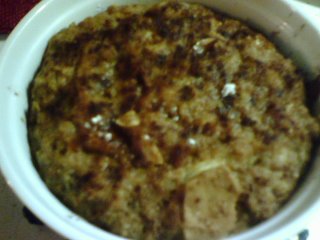 I just read an article giving the 20 things to do now to get a good job later. Number 6 said the following -

"Skip the law-school track. Lawyers are the most depressed of all professionals. Stress itself does not make a job bad, says Alan Kreuger, economist at Princeton University. Not having control over one's work does make a bad job, though, and lawyers are always acting on behalf of someone else. Suicide is among the leading causes of premature death among lawyers."

Too late. I already went and very sad. Number 3 said not to take on too much debt for school either. Also too late. So what is a hopelessly-in-debt attorney to do? I took two days off and I'm being a complete and total sloth. It's cold and raining out. I never got out of my pajamas and I am loving it!!

My apartment is filled with the scent of cinnamon. I am baking bread pudding and will soon be photographing it for your viewing pleasure and eating it for my tasting pleasure. While I was studying for the Bar exam, many moons ago, I kept a food diary of everything that I cooked or baked. I never baked so much bread in my life. I found the kneading to be extremely soothing. I also had fantasies of turning it into a book one day. I think many attorneys secretly, or not so secretly, want to be writers. I know it's true for me. Therefore, I blog.

I was visiting my Aunt a couple of weeks ago, and she mentioned that she had been reading my blog. I was pleasantly surprised. She commented that I hadn't been cooking lately. I sadly realized that she was right. So today, I'm going back to my baking roots.

My mom gave me this bread pudding recipe soon before I moved out on my own. I've modified it over time. Very rarely do I follow the directions exactly and I don't always measure. Season it as you like. I added almond slivers and more raisins than called for. The buzzer just went off! It's time! ........

Okay, I'm back. I'm taking very few pictures, because I realized when I do, that it ruins the enjoyment for me. I did it for my biscotti recipe, but found it rather irritating. Plus, the pictures were not that wonderful. I guess I'm not a true food blogger. Anyway, I used far more bread than what the recipe called for, so I have a big bread pudding, plus a little mini one. I'll probably freeze a decent portion of this. Here's the recipe.

3-5 cups bread (I freeze the heels and accumulate them until I have enough.)
3 cups warm milk (I use vanilla rice milk)
dash salt

Put bread in very large mixing bowl and rip into small pieces. Add salt, warm milk and stir. Let sit for about 10 minutes. The bread should soften and be wet. If the consistency is too dry add more milk.

Pour mixture over soaked bread and stir. Beat 3 egg whites with electric mixer until foamy. Stir into bread mixture. Pour bread mixture into oiled baking container(s). Sprinkle the top with cinnamon and confectionary sugar. Bake for 45 minutes at 350 degrees. I like to serve it warm with whipped cream or Elan vanilla frozen yogurt.

Yum! This is real comfort food! So when the law gets you down - bake, bake, bake!!!
Email Post
Labels: attorneys baking blogging bread pudding lawyers

Nance said…
Stop reading articles like that! Law should be fulfilling, too, because you're helping other people. You're trying to correct wrongs. You're trying to fix parts of the system that got broken, and you're advocating for people who would otherwise fall through the cracks. I'm sure that's why you chose law. The author probably failed to take the person's motivation into consideration. So, snuggle up in your jammies, bake and nibble your comfort food, and then get back out there! You could be someone's superhero tomorrow!
9/4/06, 7:55 PM

Bread pudding, yummy, you know that is a New Orleans favorite. As a matter of fact I had some over the weekend with a delicious warm rum sauce and vanilla bean ice cream. I think by Thursday I will have walked those calories off; along with the wine (he he).

Like my sister who is practicing law in GA; that 1 big case that you never expected will clear all the debt up and you will never look back. Just forward, at bread pudding and vanilla bean ice cream….. And of course the rum sauce. (He he)

Jeseem said…
as long as u love ur work, why care what others say abt it.
that writer must have smthing against lawyers :-))

nance - It definitely was not the happiest of articles. Thanks for the reminder about the good stuff!

suttonhoo - You are so right!

dezel - LOL. I didn't know it was a New Orleans favorite. I learn something new everyday!

starry said…
Law and a good cook. comfort food indeed. I love bread pudding. thanks for sharing this recipe.take care.
9/5/06, 1:10 AM

So So Simple said…
Anali
It sure is a New Orleans favourite we had several visits to that wonderful city late 80's early 80's...Jazz Fest time...and went to the cooking school there in Jackson Sqaure. It consisted of just a couple of hours of watching Big Joe cook and eating the samples...very nice too. Wonder if it was destroyed in the cyclone? Any one know?
Hope not.
Anyway they gave us a bread pudding recipe and yours sounds just as good.
Choclate chips are a good addition

Must have the whiskey sauce though I will look it up for you
It gives that extra boost and you will forget any worries.

Glad you liked the watercress soup recipe. Will be good for your oncoming fall lunches...
Cheers keep up the good blogs
9/6/06, 1:50 AM

Lisa Johnson said…
samuru999 - Tell me how it comes out!

Lisa Johnson said…
so simple - That must have been an amazing experience taking cooking lessons there! It's funny you mention the chocolate chips. I have some here and considered adding them, but wasn't sure how they would taste. Maybe next time with your whiskey sauce recipe!
9/6/06, 1:55 AM

Cream butter and sugar over med heat until all butter is absorbed.
Remove from heat and blend in egg yolks. Pour in Bourbon gradually to your own taste.
(Use the lot for depressed lawyers!!!)stirring constantly.
Sauce will thicken as it cools.
Serve warm over your bread pudding.

We loved the food in NO so much and have had many Cajun nights with all of our friends who we talked into joining us at Jazz Fest. It's a long way for NZers to go.
Everyone who went to the school has a favourite dish.

I make a mean gumbo and great red beans and rice.
My son loves the Shrimp and Artichoke Etoufee.
Our friend Ms June is Queen of the Bread pudding.

We are so enamored with Cajun society we even started the Royal Cajun Yacht Club...which was just an excuse for a big party where my husband and son could play with their friends in their band.
Everyone has to have a Margarita on entry to give a good kick start.
Great nights have been had.
9/6/06, 4:04 AM

Dezel Quillen said…
I can taste that recipe So Simple, and your mention of gumbo reminds me of back home; my Great Grandmother made the best seafood gumbo I have ever tasted. Looks like Dezel might have to visit Copeland’s this weekend to get a quick cheap fix.

Very nice page So Simple. Anali, let us know how that sauce turns out when you mix it all up ; )

Lisa Johnson said…
so simple - Thank you so much for the recipe! I will definitely try it and let you and Dezel know how it turns out. This is so exciting!