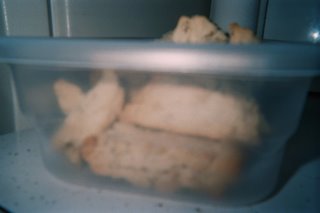 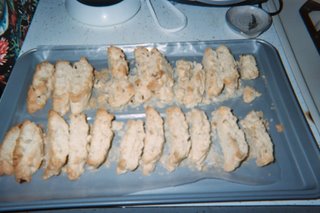 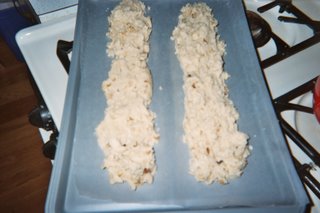 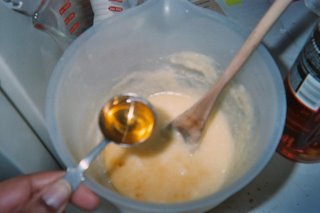 I’ve adapted this recipe from one that I found in The Boston Globe years ago, cut out and taped to a page in the first volume of my cookbook. It’s yellowed over and I’ve written changes on it. I don’t have the date, but the recipe is from Chez Panisse Cooking, by Paul Bertolli with Alice Waters (Random House). I haven’t actually read this cookbook, but I know it’s a classic.

I've been using this biscotti recipe for years now and I don’t think I’ve ever made it just for myself. I usually bake it as a gift of some sort. But don’t think I’m too selfless. I don’t like the way the ends of biscotti look presentation wise, so I don’t include them in the gift. They remind me of the heels of bread, which I don’t eat as regular bread. I cut off the ends and freeze them until I have enough for bread pudding or I’ll make breadcrumbs. With the biscotti heels, I cut them off before the second bake and eat them! They are so good!

Last weekend, my brother had a barbecue over his house. He asked me to bring biscotti. I didn’t even know that he liked it that much. How could I say no? It was raining, so we all stayed inside for the most part, but it was really fun. There was tons of food and desserts. My biscotti was a hit and one person told me that it was the best biscotti she ever tasted. The recipe is very easy to make, but it does take close to two hours start to finish.

I simplified the original recipe by taking out some steps that didn’t seem necessary to me. I also changed one ingredient. The original recipe calls for brandy or cognac, but I don’t usually have them in the house. I always have Southern Comfort, which is described as a “peach flavored bourbon liqueur with citrus and orange overtones.”

It’s my father’s favorite drink. He brings it whenever he goes to someone’s house and makes his special drinks for everyone. Then if you are lucky enough to be the host, you get to keep the remainder of the bottle. I had Easter dinner and my SoCo supply was replenished! I’m not a big drinker, so I bake with it more than I drink it. It goes in cakes, cookies, everything. Hey, I grew up watching Julia Child.

Set the oven to 350 degrees. Combine ingredients in bowl. Mixture will be a doughy texture. Line a baking sheet with waxed paper (parchment paper). You can oil and flour it or not. Shape the dough into two strips. Bake strips for 25 minutes or until lightly browned.

Remove from the oven, but keeping on the pan, let cool for about 10 minutes. With a sharp knife cut off the four ends and eat! Or not - just MY personal preference. Cut the remainder into ½ inch slices. Turn the slices over on their sides. Bake for an additional 10 minutes or so, until the light sides are browned. Cool and store in covered container.
Email Post
Labels: baking biscotti cooking food Southern Comfort

something from me said…
Anali,
You do like writing about food, don't you?
I always seem to read them just after my 15 mile cycle ride into work. So now I am hungry already.
I might try this at the weekend.
Steve
6/14/06, 4:43 AM