Baking is an art and a science. 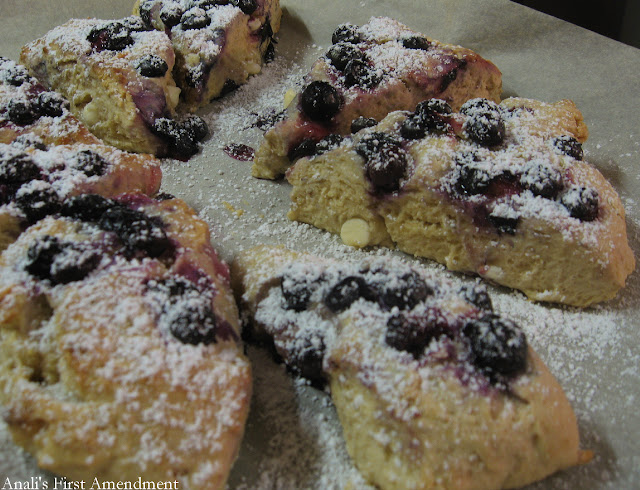 Last weekend I went to a very cool dinner with the most eclectic group of people. I'll be blogging about it soon. One of the things that struck me was a conversation that I had with a woman about baking.

She said something that I hear so often and it really makes me sad. She said that she cooked, but didn't bake. "Baking is a science. You have to stick to the recipe."

The myth that you cannot be creative with recipes when you bake is not true! That misconception is something that I try so hard to break and is part of the mission of this blog and when I teach baking classes. Baking allows for so much creativity and is a true art form.

Sure it's a science too. When you use yeast, there are certain proportions that are in a recipe, so that the bread or whatever you're baking will rise. Baking powder and baking soda also have a chemical reaction, so that your cookies or cake will rise. But you can play with the amounts to make a dense cake by using less or none, or use a lot more to make it rise high and be fluffier. But then you need to adjust the salt and use more or less as well.

There is wiggle room. Lots of it. Part of it comes with experience and practice. When you feel familiar with ingredients and how they react and you've read enough recipes, you notice patterns. Once you see those patterns, you can adapt a recipe.

You can use different types of flours, like whole wheat, buckwheat, rice, coconut, millet, etc. Experiment with milks by using, soy, almond, rice,or hemp. Change the extracts for flavoring with vanilla, almond, orange, lemon. Add a bit of cocoa powder even if the recipe doesn't call for it, but you want chocolate.

Make it vegan by using apple sauce or a mashed ripe banana instead of an egg. Use different types of oils. Sesame, olive, avocado, coconut. Instead of chocolate chips, use butterscotch chips, white chocolate chips, walnuts, raisins, dried cranberries or almonds or a combination of some of them.

Ways to make a recipe your own are endless. Just give it a try and don't be afraid to fail. Most of what I bake is pretty good, but there were a few things that I had to toss. It wasn't the end of the world.

Don't believe the hype that baking is only a science. It can be your creative outlet like painting or singing. And maybe I'm not giving science enough credit. Scientific breakthroughs often come about from a major shift in thinking because of a creative mind.

If you have an idea for a new dessert, but you don't quite see what you're looking for and aren't comfortable creating it all on your own, read four or five similar recipes. Then decide what you like from each of them, figure out the proportions and keep them similar for your first try.

What are the ingredients doing? Is it a liquid, like water or milk? A spice, like nutmeg, cinnamon or ginger? A leavener, like yeast, baking soda or baking powder? A binder like an egg? A flour?

Take what you want of each type of ingredient needed and improvise. You might just bake something great.

Photo: I usually start with this scone recipe, but I still play with it. My baking philosophy is that no recipe is ever set in stone. It's just what I'm writing down for now. I'll probably make it a bit differently the next time. For these blueberry white chocolate chip scones pictured above, I used the chips instead of raisins and added about a half cup of blueberries, then dusted with powdered sugar after removing them from the oven. I think I used one teaspoon of almond extract and one of vanilla.