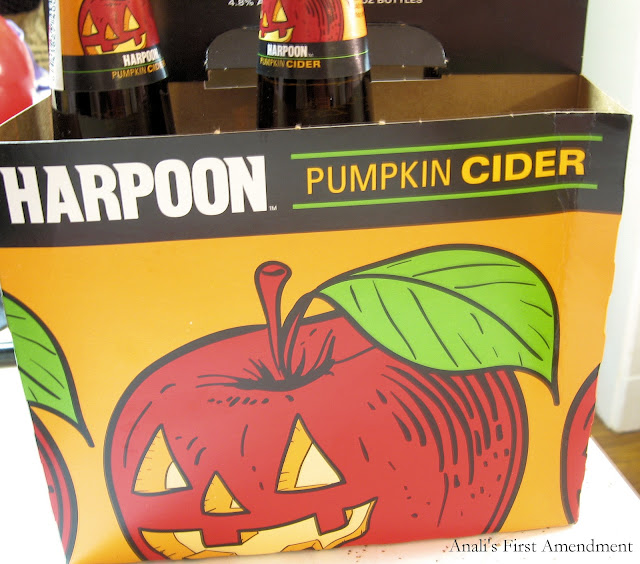 I guess I should have known better. I've heard of Harpoon Brewery. I know they make beer. But I don't like beer and I don't buy it. Unless I buy it by accident. *sigh*

You see fall was in the air and I had my car back after almost two weeks in the repair shop. On top of not having it for a week a few weeks before that. And my cell phone died and I had to replace it. I still haven't updated my contacts. But that's another story.

So I was finally able to get some groceries from the store. I was feeling the apple, cider, and pumpkin thing in a big way.

Canned pumpkin was on sale. Yes! I already had some apples from the farmers market. I had some apple cider, but then as I was walking past the alcohol section, I noticed pictures of pumpkins. I'm such a sucker for seasonal themes.

The pictures of pumpkins were all on beers. I didn't see any pumpkin flavors on the hard cider brands that I've bought in the past. Not fair! That's discrimination against us non-beer drinkers!

So I wandered down the aisle some more. The section was for Harpoon, but unlike the others, these didn't  say beer anywhere on the package that I could see. The whining in my head stopped! Was this real? It clearly said Pumpkin Cider! I figured that this was a type of hard cider and that Harpoon was looking to expand their market to non-beer drinkers. Great idea!

Later that evening, I made some goat cheese popcorn, which is really good by the way. Maybe I'll blog it another time. I grabbed what I thought would be a sweet pumpkin cider. I've had hard cider before and loved it. But never pumpkin flavor!

So I drank it. A big gulp. Hmmm. It didn't taste like the hard cider that I've had before. It was very dry. Almost like beer... Hey!! I was duped! It is beer!

Well, for those of you who like beer, you'll probably like it. I like the idea of the creative seasonal flavors. The taste isn't horrible. It's just not sweet and not what I was expecting. Or meaning to buy.

Has this ever happened to anyone else? I still think the label should say "beer" on it. Or maybe it's just me...

Tracy said…
Pumpkin... oh, I love this pumpkin time... give me anything with pumpkin! I wonder if there's pumpkin beer? I like beer now, I didn't always, but have come to like it after trying different kinds. There's some great beers over here in Europe. ;o) Nice to catch up with you! I've been offline a few days having some fun, just now surfacing! Happy Weekend ((HUGS))
9/28/12, 7:27 AM

Lisa Johnson said…
esme - It was rather disappointing, but at least I got a post out of it! : )

Can-Can said…
I hate beer, too. I even hate the smell of beer on people's breaths. Not liking beer or coffee leaves me out of a step in some ways but I still got my party on after the Beantown Jazz festival at Slade's. Others drank around me (including beer) but the chicken wings and water were fine for me. Live jazz and then a slamming DJ. Dancing on a Saturday afternoon/evening -great fun. Sorry about your beer mishap.
9/30/12, 11:31 PM

Lisa Johnson said…
can-can - Well certainly worse things have happened to me, so I'm dealing. And truth be told, my mishap may just work out. Now I can try all the recipes that call for beer, but I never tried before because I had no beer. Lemons to lemonade! : )

Slades sounds like fun! I hear about it all the time, but still have never been there. Everyone talks about their wings, so they must be really good.
10/1/12, 12:03 AM

Unknown said…
Ugh I hate beer too! Also not a huge fan of pumpkin flavored things, although it is growing to me (Dunkin Donuts Pumpkin Cream Cheese anyone? Not too shabby!)
10/5/12, 9:51 PM