Last week was opening night of TOTEM, the new Cirque du Soleil show in Boston. I had never seen one of their shows, but had become increasingly intrigued over the years and hoped to go.

Somehow I got onto a very good list and received an email personally inviting me and a guest to attend. The timing was definitely not good for that night, but I really really wanted to go. I'm so glad that I did.

My friend N is always up for something fun and we had a ball! The music, the costumes, and the performance transports you not only to another time, but at times feels like another planet. If you need an escape from your daily life, this is it! Take a look at a preview here.

The discipline, strength, control, and flexibility of the performers blows my mind. It doesn't seem possible that the human body can do these things. But they do! And they surprise you! The go from standing to flight and back like the wind!

At certain points, many of us had to look away and cover our eyes because it seemed like someone would fall. Mayhem would have ensued and a few of us audience members would have been taken down with them! If you have a bad heart, it might be too much for you! Luckily nobody was hurt, but it was a roller coaster of emotions.

As much as I loved the show, there are a few things to be aware of. The seats are very small and there is barely room between people to move around. The show is somewhat long, close to three hours, but there is an intermission which lasted about half an hour. Since the show is performed under tents that the company builds, it feels like you're indoors, but you're not.

So if you need to use the restroom, then you may need to use the port-a-potties. Hopefully this isn't tmi, but I really needed to use one. The intermission went by surprisingly quick. I didn't want to deal with a line and the thought of using port-a-potties kind of freaks me out. Too many germ issues. Anyway, I didn't look, so for all I know, they were quite lovely and lavender scented. But I just held it.

If you're taking the T, use the Silver Line. Take the SL2 to the Design Center stop. The bus will drop you off right across from the tents. I took the 7 City Point bus, which was absolutely a mistake. Several people going to the show took it and we had to walk a decent amount before we made our way to the right place. Luckily the rain had stopped, otherwise I would have been drenched when I got there. There was a parking garage nearby as well. 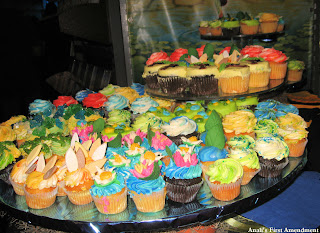 Since it was opening night, we all got a bit of special treatment. Free popcorn, water, and soft drinks.

Then during intermission, free champagne and cupcakes! Yum! The cupcakes were provided by Party Favors in Brookline. I had a regular sized one and two mini ones. I couldn't help myself! Aren't they pretty?

Last week was not a good one for my waistline. But the show was good for me. It was such a unique experience and I'm looking forward to seeing another Cirque du Soleil show in the future.

Disclaimer: Thank you to Cirque du Soleil and Kathy Rochefort Associates for the complimentary tickets to TOTEM.