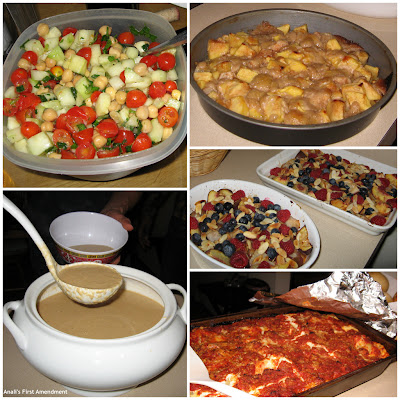 Another winner dinner! The food was great and there was only one incident in the meal planning. We try to have everyone make something different, but there were a few last minute frantic emails trying to sort out just who was making the salad. Here's a portion below with some minor edits to protect the anonymity of the parties.

"I'll let you two duke it out about the salad. No bloodshed please. Remember, Lisa will be blogging about our cooking club and auditions for Iron Chef are closed. How about another dessert? I don't think anyone would complain over two desserts."

So we ended up having two desserts. And nobody complained!

We chose Ina Garten as this month's celebrity chef. She's also known as Barefoot Contessa. Where did the name come from? Garten explains on her website. See below with minor edits adding links.

"Barefoot Contessa is the name of a classic movie from the 1950's with Humphrey Bogart and Ava Gardner. When I bought the store in 1978, it was called Barefoot Contessa. The former owner is Italian and her family called her the Barefoot Contessa when she was young. It's about being elegant and earthy which is what we're about."

By the way, it's a great movie. And in case you're reading about these dinners for the first time, here's a list of the previous chefs.

The shrimp bisque was out of this world good! I cannot recommend it highly enough. I'm not a huge salad person, but it was remarkably good too. The lasagna was top notch as well.

I made the apple crostata and would make it again. Loved the flavor, but there didn't seem to be enough pastry, so I would double the amount next time. This could be my own personal pastry problem though. Maybe someone with better skills could roll it out and stretch it better. Crusts are not my forte. And the crisp went nicely with the crostata. It all worked out in the end!

Our next dinner is coming up soon and I'm really looking forward to it. Who's our next celebrity chef? Ming Tsai!

Lisa Johnson said…
bellini valli - Thanks! I'm glad you're enjoying them. I'm getting ready to choose my next dessert recipe. Ming Tsai has a great website!
3/23/11, 1:03 AM