Sugar-Crusted Popovers On A Sunday 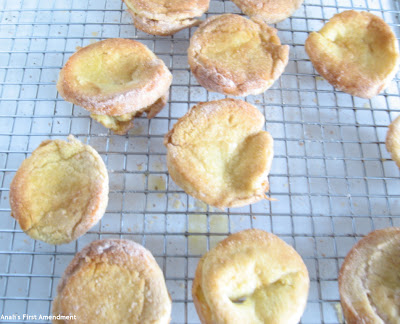 Do you ever feel destined to make a recipe? That's how I've been feeling about popovers lately.

A friend of mine makes them every year for Christmas even though she considers herself more of a cook than a baker. She does both very well by the way. She's told me that popovers would be a snap for me, since I'm really into baking.

For some reason, until this morning, I never got around to making popovers. Not even from a mix. I'm not quite sure how that happened. But thankfully that sad era has come to an end. I'm sure it also had something to do with eating a lobster popover recently.

So yesterday I searched for a popover recipe and found one for Sugar-Crusted Popovers by David Lebovitz. The recipe looked simple enough and quite good.

I told my mother that I was thinking about making popovers for breakfast on Christmas morning, but I never made them before. We both agreed that it would be a good idea for me to do a trial run first.

So that's what I did this morning. I followed the recipe for the most part except for a couple of things. I used vanilla rice milk instead of whole milk and by accident I put the flour in the blender at the same time as all the other ingredients. It didn't seem to matter.

I don't have a popover pan, so I used a muffin pan. I do think that made a difference. If there had been more batter in each popover, they would have puffed up higher. So I really really really want popover pans now. More baking gear!

It was fun putting all ingredients in the blender and letting the machine do all the work. No hand mixing! Sadly I don't have a KitchenAid Mixer, which I'm wanting even more now.

So the ingredients blended in seconds. Then you just pour the mixture in the pan and bake. There is no leavening in popovers and I was wondering how they were going to rise. Then I realized that it must be the air that gets into the mixture when the ingredients are in the blender. All the air causes the puff!

Making popovers is just plain enjoyable! Peeking through the oven window as the popovers start to puff. Then brushing the popvers with butter and rolling them in the cinnamon sugar mixture. How fun is that? Popovers would probaly be a good baking project with kids. I only used about half the amount of melted butter and cinnamon mixture though. So I'm going to use less next time.

Popovers are custard like inside from all the eggs. I love the texture! It was hard to stop popping these in my mouth! G tried some too and thought they were very pretty, but that the flavor was just okay. He's a coffee dunker and popovers aren't very dunkable. Oh well. He ate them just the same. : )

Sage said…
yummo! funny, I was feeling the same way about popovers at Thanksgiving, so I made them and my family/guests raved about them! I think I've been inspired to try your breakfast popovers on Christmas, too! Cheers!
12/20/10, 9:33 AM