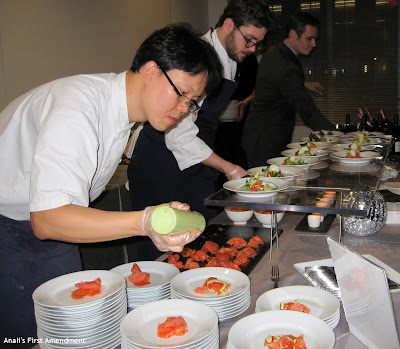 Last week, I gave you a sneek peek of the McGladrey Culinary Challenge for Charity. Before too much time gets away, I want to share the rest of the photos and tell you a little bit more about the event.

There were so many people! Over 700! It was rather overwhelming at first and I had to get my bearings when I first walked in.

The first table that I was able to taste from represented L'Espalier and served House Smoked Salmon with Oyster Parsley Cream & Ruby Red Pink Grapefruit. Delicious! I only wish that there had been places to sit and savor the food a bit more. It was so good! I'm a slow eater and had to pick up the pace of my eating.

The McGladrey Culinary Challenge paired seven charitable organizations with renowned Boston-area chefs and media personalities as celebrity “Sous-chefs” in order to raise money for local community-based projects. Over $60,000 was raised!

Below is a listing of the Celebrity Chefs and Media Personalities pairings. 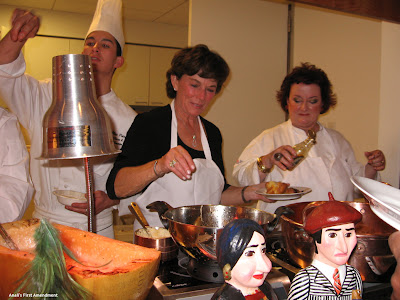 One of the big draws of the evening was the pairing of Lydia Shire from Towne and Natalie Jacobson, retired news anchor. There was a serious line to wait for the food! But I made it through. Toughed it out like a champion! : )

What was the dish? Duck Grilled over Cherry Wood with Fresh Chestnut Risotto & Fresh Currants. While it's not on the official brochure for the evening, there was also a lobster popover.

A lobster popover! It was my favorite thing! I can't stop telling people about it. Well, I very much look forward to having it again someday. And I'm going to try my hand at making popovers myself. A friend told me that baking them is very easy and she makes them every Christmas. I'm going to try and do the same.