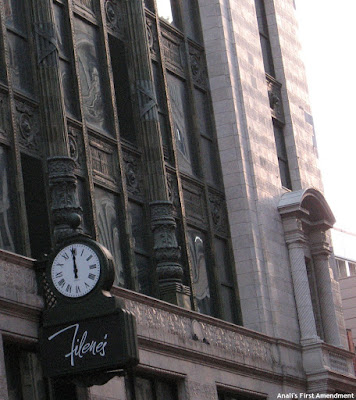 The other day, as I was walking around downtown, the old Filene's clock caught my eye. My heart panged a bit when I thought about the old Boston stores. 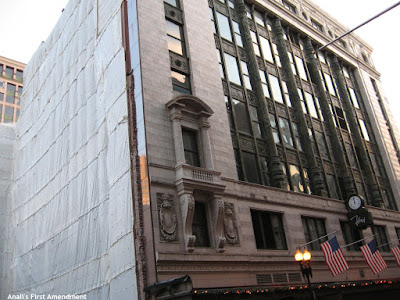 Both Filene's and Jordan Marsh are gone. Only the clock remains, with the hands frozen in time at 12:00. And the demolished Filene's Basement is stuck as well. Now it's just an open space in the street and a large tarp hangs over the side of what was the Filene's building. Because of the economy the redevelopment of the original Filene's Basement store has stalled.

A blog called Boston, you're my home, has up a nice post called When Downtown Crossing had Christmas Magic. There are some beautiful old pictures of how things used to look in the 1950's. For some more old pictures of Boston, take a look at the MIT-Libraries' photostream on Flickr.

I'll have to look through some old pictures at my parent's house to see if I can find something interesting there. So many Christmas memories. What are some of yours?

Patricia Boudrot said…
Speaking of memories of shopping Downtown, WGBH-2 is airing a documentary on the history of Filene's Basement called "Voices from the Basement," Thursday, 12/9 at 8:30pm. Visit www.wgbh.org to see a trailer of the film, vintage photos, interview with filmmaker and exec producer and more.
12/7/10, 4:55 PM

Lisa Johnson said…
merisi - Thanks for the visit! It's so strange now that Filene's Basement stores are all over the country and the original is gone.

patricia - Welcome! Thanks so much for letting me know about the special! I'm looking forward to seeing it. : )