Juneteenth + The Pursuit of Happiness 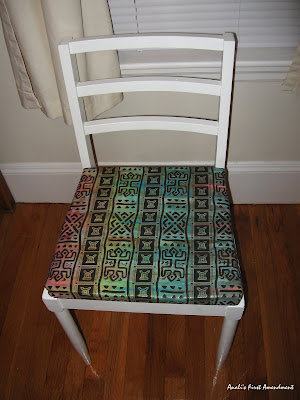 This is a long post. I hope that you'll get comfy, take a seat, and read along.

"When in the Course of human events, it becomes necessary for one people to dissolve the political bands which have connected them with another, and to assume among the powers of the earth, the separate and equal station to which the Laws of Nature and of Nature's God entitle them, a decent respect to the opinions of mankind requires that they should declare the causes which impel them to the separation.

We hold these truths to be self-evident, that all men are created equal, that they are endowed by their Creator with certain unalienable Rights, that among these are Life, Liberty and the pursuit of Happiness."

Declaration of Independence This post is about Juneteenth, but when thinking about freedom and all that's going on in the world, I cannot help but think about what is happening in Iran. We as humans have many things in common. One of the most fundamental is the need to be free. And it seems to be an eternal struggle. No matter what country we live in, there always seem to be some who want to oppress others. I believe that is a minority of people, however for some reason, they often seem to be the ones in power.

I don't think that great people are always bad, but power certainly does seem to bring out the worst in many. Today is June 19th, also known as Juneteenth, which is "the oldest nationally celebrated commemoration of the ending of slavery in the United States. From its Galveston, Texas origin in 1865, the observance of June 19th as the African American Emancipation Day has spread across the United States and beyond."

Today, the United States Senate, through Senate Majority Leader Harry Reid issued a statement which reads in part,“We celebrate an important day in our history today; a day when our nation began anew and ended the oppressive practice of slavery. We commemorate the joy of those newly freed Americans and reflect upon the true value of our freedoms."

Yesterday, the Senate made history and formally apologized to African-Americans for slavery and segregation. You can read the Senate Resolution apologizing here. Below is a portion of the Resolution with some edits for clarity.


Resolved by the Senate (the House of Representatives concurring), That the sense of the Congress is the following: APOLOGY FOR THE ENSLAVEMENT AND SEGREGATION OF AFRICAN-AMERICANS.

The Congress acknowledges the fundamental injustice, cruelty, brutality, and inhumanity of slavery and Jim Crow laws; apologizes to African-Americans on behalf of the people of the United States, for the wrongs committed against them and their ancestors who suffered under slavery and Jim Crow laws; and expresses its recommitment to the principle that all people are created equal and endowed with inalienable rights to life, liberty, and the pursuit of happiness, and calls on all people of the United States to work toward eliminating racial prejudices, injustices, and discrimination from our society.

As an African-American who is a descendant of slaves, I accept the apology. It's not all that can be done. The disclaimer is huge. Reparations are still an issue. But it does have meaning. If nothing else than for the history books.

I cannot imagine the pain and suffering that my ancestors went through in this country. But their suffering has given me the life that I now lead. I have the freedom to pursue happiness that they did not. So I am pursuing happiness vehemently. I owe it to them. Otherwise what did they suffer for? I don't know if they could have pictured my life in the future. And to think that I live in a United States with a black President! 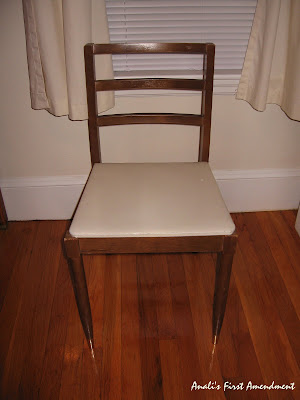 Well, one of the things that makes me happy is the freedom to create. In my last post, I mentioned that I found a chair at a yard sale and was working on a DIY chair make-over. I finished! The picture above is before.
I used this DIY blog post from How About Orange to walk me through the directions. The process was surprisingly easy. The seat cover unscrewed very easily usuing a manual screwdriver. I was able to use a regular staple remover to take out the staples and remove the ugly vinyl covering. 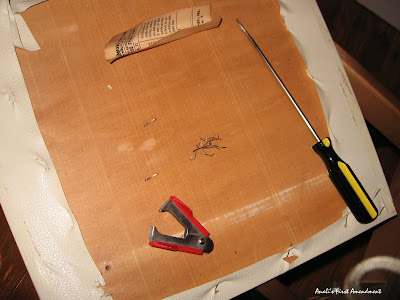 From one of my last projects, I already had sandpaper to rough up the wood a bit. Then I cleaned off the dust and grime and put on primer that I bought at Home Depot. I also bought paint and a heavy duty staple gun. I admit that I was a little scared to use the staple gun. When I was little, I stapled my finger with a mini-stapler. 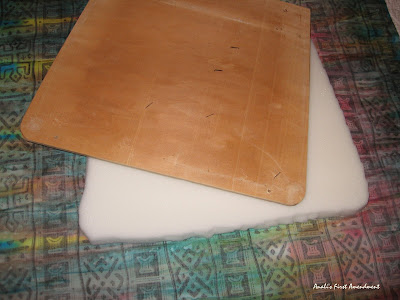 Well, my fear was for nothing. No stapling accidents! I bought the ready to use foam chair pad and cut it to fit the chair. I used about a yard of fabric and ironed it before stapling to the seat cover. Then I screwed the nails back into the newly covered seat cover and had a new chair!

How I chose the fabric is an interesting story. I had planned to buy some really pretty fabric by Jessica Jones that I saw on the blog that I mentioned before. She recently mentioned that she had a coupon for her readers if we ordered from a website that was newly carrying her line of fabric. When I checked, I couldn't find her fabric. As much as I love her fabric, it's not cheap. Plus there would be the cost of shipping.

Yesterday, I decided to look for some fabric in a store near me. While driving down Morrissey Boulevard a few months ago, I had noticed Sewfisticated Fabrics. So I decided to drive there.

When I walked in the door, the first thing that I noticed was a sign for some new African fabric that they had just received and had on sale. One fabric in particular really drew me in. I loved the colors, the design, and the feel of it. It resonated with me on a personal level. I looked around the store, but kept coming back to the same fabric. This was it. I knew it. I bought it.

First, I had no knowledge at all of Juneteenth. I am ashamed to say that, but it's true. I sincerely thank you for educating me.

Congrats on the chair! You did a beautiful job. :-) And, even though I've only "known" you a short while, that fabric suits you well. I see more DIY projects in your future. I want to get some new chairs for my counter area (the seating area is normal table height--my dad built it per my design when we built our house). I've always liked the idea of mismatched chairs with multicolored paint. I'm not much a yard sale person, but maybe I'll be on the lookout now that I have your inspiration. :-)

I'm very happy for you with your new Juneteenth chair to commemorate this special day in history.

La Belle Esplanade said…
Happy Juneteenth and every following day. May they all be filled with happiness, for all of us together.
6/19/09, 11:26 PM

Nanny Goats In Panties said…
That fabric is gorgeous! And I'm totally DIY-tarded, so I admire your ability to presto change-o your chair.

Can-Can said…
I celebrated Juneteeth at the Roxbury Homecoming Picnic in Franklin Park on Saturday afternoon. I, too, think the apology is a great starting point for the horrors of slavery.
If you ever decide to look for upholstery fabric again, check out Freddy Farkel's Warehouse in Allston (or it may be in Brighton). They have a huge selection of fabrics and I got a great deal on some high-end upholstery fabric that I used to cover 6 chairs purchased on Craig's List.
It's nice to DIY and do it well.
6/22/09, 9:50 PM

the paris apartment said…
I had no idea about Juneteenth so thank you for the information. There's been so much suffering to get to where we are today as a country and it's sure not perfect but at least we can feel safe at night. I can't imagine what the people of Iran are going through.
6/22/09, 11:36 PM

Mocha Dad said…
Juneteenth is a special holiday for us Texans. Thanks for educating more people about it.
6/23/09, 10:03 AM

Suldog said…
Happy (belated) Juneteenth, Anali! I knew about it, posted something about it then (in tandem with an African-American blogger friend of mine) and continued on with it today. Some of it is raw stuff, but it's the truth about my own continuing journey towards trying not to be a bigoted jerk.
6/23/09, 11:15 AM

Liz Dwyer said…
The apology added something extra to my appreciation of Juneteenth. It's not everything but it helped to think how even an apology was unthinkable back in the time of slavery. And I love your chair. I have a could of DIY projects I want to tackle, like making a new headboard for my bed! I should get on it!
6/23/09, 3:21 PM

i was thrilled when i heard about the apology! i never thought it would happen in my lifetime. there's still a long way to go, but it's a step in the right direction. xx
6/24/09, 11:58 PM

Lisa Johnson said…
shirley - No need to be ashamed about not knowing. I only learned about it when my cousins moved to Texas and then told us Northern cousins about it. It's not something that's taught in history. At least not when I was in school. I'm just glad that the word has spread!

whalehead king - Thank you so much WK!

nanny goats in panties - Thank you! It did feels sort of presto change-o! It was so quick and easy!

Lisa Johnson said…
can can - Thank you so much for telling me about Freddy Farkel's Warehouse. I looked it up and I think it's in Watertown now. I'm definitely going to make a trip over there. Oh, and they had a coupon on their website and they even carry Marrimekko fabric. That place looks awesome!

the paris apartment - You're welcome! As a nation, we certainly have a lot of healing to do. I feel hopeful seeing that we are taking steps toward it.

slices of beauty - Welcome! And thank you for the kind words. : )

Lisa Johnson said…
suldog - Thank you! I'm so behind in my blog reading, but I read part 1 and it was really quite compelling. What a great idea to do a joint post. I'll read the second part today hopefully.

los angelista - I was so glad to read your post too. And your headboard project will be so much fun. I see so many ideas on design blogs about how to do cool diy headboards.