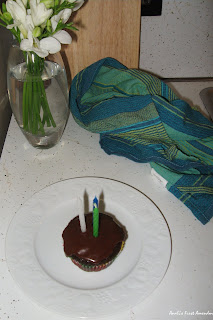 Today is three years since I started blogging! What a whirlwind it’s been. So many new experiences and opportunities have opened up as a result, and I’ve met people that I otherwise probably would have never met. I’m looking forward to more blogging and have a word in mind going forward. A theme for year three. The word is Collaboration.

There will be more guest posts and interviews. Who knows what else? I like pleasant surprises. Do you have something in mind? Let me know.

I’m putting this out to the Universe. From what I see, when people do what they love, and are open to opportunity, it works. If you work hard, play, hope, and believe, I think you can start to create the life that you want. That’s what I’m hoping for.

In keeping with the theme of collaboration, let’s get things started right now. I was recently contacted by MyRecipes.com and had the opportunity to speak with Holley Johnson. 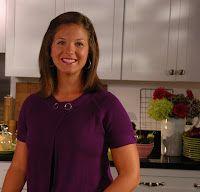 Holley lives in Birmingham, Alabama, and is the Food Editor of MyRecipes.com, the Time Inc. Lifestyle Group’s food and recipes portal, which contains more than 33,000 professionally, kitchen-tested recipes.

The recipes are drawn from the company’s many magazines including Real Simple, Cooking Light, Southern Living, and Health.

While copying the link for Health, I just randomly noticed a wonderful article on how to progress from walking to running in 8 weeks. I’m not sure that I’ll do it, but I have been thinking about it.

These are all great magazines and websites filled with a lot of information. Holley is responsible for feature stories on MyRecipes.com, the site’s “Healthy Diet” channel, and hosting Dinner Tonight, a daily video series featuring meals prepared in 45 minutes or less.

Previously Holley was Associate Food Editor for Southern Living magazine, where she wrote the “Healthy Food” column and the “Healthy Living” special section. Holley is a Registered Dietitian and has appeared on many national and local broadcasts including CBS’s The Early Show and NBC’s Today Show. 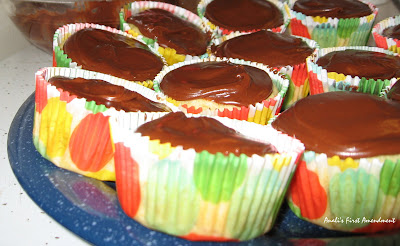 Now for sometime, I’ve been wondering about when I adapt a recipe. Am I really making it healthier than it was before? I’ve assumed that I was, but one really should not assume. So Holley gave me the opportunity to find out by doing a “before and after” nutritional comparison of the recipes.

I adapted Magnolia’s Vanilla Cupcakes and Magnolias Vanilla Buttercream Frosting recipes into something quite different. See below.

I ended up making these cupcakes twice, because the first time the texture was a bit off. The second time they were really good. I must admit that after the second day, the frosting started dripping a bit, which was odd and I felt awful about it. When I spoke to Holley, she was very kind and said “Don’t beat yourself up too much over it. That happens to cupcakes that you buy too.”

I didn't feel as badly afterwards, but maybe you shouldn't let them last for more than two days. Which should be quite easy, because they're very easy to gobble up quickly.

Holley and I had a great conversation talking about baking and experimenting with foods. She hadn’t used Smart Balance for baking and was curious about my use of rice milk instead of regular milk. The best news of all was the result of her before and after comparison. Holley told me that for each cupcake, I had managed to reduce the amount of calories and fat by more than half.

The recipes were analyzed using Food Processor Nutrition Analysis Software version 8.9.0. The Magnolia Cupcake with Buttercream Frosting was 409 calories and 16.5g of fat. My banana cupcake with frosting was 208 calories and 8.6g of fat. In no way do I mean to disparage Magnolia Bakery or their cupcakes. Someday I hope to get to one of their bakeries and down a few. But I did enjoy adapting this recipe and eating the cupcakes. Hopefully you’ll try my recipe and enjoy them too.

In keeping with my general policy of full disclosure, I did not receive any money for this post, but the nice people at MyRecipes.com have said that they will send me some goodies. I did not ask for anything, nor was anything required for me to write this post. However, I am looking forward to whatever they send. And thank you for your help Holley!

FH said…
Happy happy 3 yrs of blog anniversary! My 3rd yr is coming up too I think. keep blogging! :)

Happy Blogiversary!!! And what an honour to be contacted by Myrecipes.com.

I am so going to try that Kahlua frosting. sounds sooo yummy.

I like your collaboration theme and putting it out there to the universe--I so agree with that approach.

Bravo on reducing the calories and fat in the cupcakes with your version. Of course, you know me, I want to convert the recipe to gfe and dfe ;-) . I won't use Splenda though, so mine might have more calories. And, I feel like I've been living in a cave, but I didn't know hazelnut Kahlua existed-yummm.

Nance said…
Happy 3, Anali! This summer, my blog will actually turn FOUR! It goes fast, doesn't it? Fun stuff really always does. I love the combo of banana and chocolate, too, ever since I tried chocolate covered frozen bananas on a stick at the zoo one time. Love those.
4/30/09, 8:03 PM

Unknown said…
Belated congratulations, Anali! Thanks for following my blog. I was intrigued with yours right at the title. :)
5/1/09, 9:52 AM

Lisa Johnson said…
asha - The frosting is yum! Well, long gone now, but it was.

suldog - I've been getting some very nice goodies! I'll be blogging more about them soon.

se'lah - I agree! I was so happy to hear from them!

Lisa Johnson said…
shirley - I didn't know that the Hazelnut flavor existed until recently myself. Every once in a while I go to the liquor store and get a bunch of mini liquor bottles to use in baking.

The store keeper made some snide comments about me drinking one a day. I explained that they were for baking, but I don't think he believed me and thought I had a serious alcohol problem. Anyway, it's a great way to test out some different flavors without spending too much money.

kirti - Thank you so much and congrats on your milestones too!

Lisa Johnson said…
nance - Thank you! Four years! Wow! You were one of the blogging pioneers! And that frozen banana with chocolate is making me want ice cream now...

enyasi - Thank you so much! You inspired me to try it out!

lori - Welcome! Thank you! I'm so glad that I learned about your blog and the Writers Worth Day event. I have to work on a post.

T. said…
Happy (Belated) Blogiversary! I have been submerged in frequent call and middle school show preparations, but I have been thinking of you and sending you warm vibes this week!
5/1/09, 7:18 PM