*Updated* Please click here for the latest on this topic. 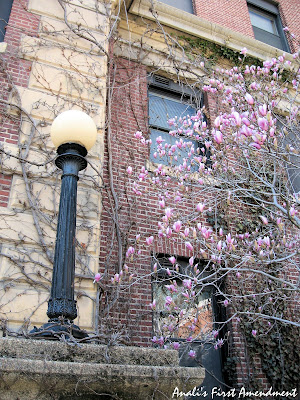 Since the weather started warming up, I make sure to bring my camera with me when I go out. You never know what you'll see and when you can use the picture. I've always been a person who notices the details. I'm a Virgo after all. But I think that I notice even more now, because in my mind's eye, I'm always framing a picture. How that translates to a don't sweat the small stuff attitude, when I notice so much of the small stuff. Still working on it...

Well anyway, not only is tomorrow Earth Day, but April is National Poetry Month. By the way, April 30th is Poem In Your Pocket Day.

Back in 2004, I wrote an Opinion Piece about National Poetry Month and it was printed in the local paper. I couldn't find it online, but was able to save it as an image. You can look at it here, if you like.

I wrote about Massachusetts being one of a handful of states without its own State Poet Laureate. From what I can tell, that's still the case. According to this FAQ section of the Library of Congress website,

Why Massachusetts? In 2008, even the city of Boston announced its own Poet Laureate. I think it's time the Bay State did the same. Although, the current economic climate certainly makes putting this off rather easy.

In my essay, I also said that if the Red Sox ever won the World Series, they would deserve an official poem to mark the occasion. And I mentioned that a poem would be nice to mark the opening ceremony of the park planned for when the Big Dig was finished.

Little did I know, that within five years, the Red Sox would win the World Series twice and the Rose Kennedy Greenway is a now a beautiful place to walk and enjoy Boston.

Well for now, there are no official Bay State poems, but I've loved the poem below since I was a child. I may even carry it with me on the 30th.

The Lamplighter, by Robert Louis Stevenson
My tea is nearly ready and the sun has left the sky.
It's time to take the window to see Leerie going by;
For every night at teatime and before you take your seat,
With lantern and with ladder he comes posting up the street.

Now Tom would be a driver and Maria go to sea,
And my papa's a banker and as rich as he can be;
But I, when I am stronger and can choose what I'm to do,
O Leerie, I'll go round at night and light the lamps with you!

For we are very lucky, with a lamp before the door,
And Leerie stops to light it as he lights so many more;
And oh! before you hurry by with ladder and with light;
O Leerie, see a little child and nod to him to-night!

Jen said…
Hello lovely lady! Thanks for the award!!! I'll have to pass along the blog love. In the meantime, thought I'd share that my email signature also includes a quote from this same poet: "A bottle of good wine, like a good act, shines ever in the retrospect." (Robert Louis Stevenson) :)
4/21/09, 4:52 PM

Tess Kincaid said…
Come on Massachusetts! Get with the program!

gfe--gluten free easily said…
What a lovely photo! It perfectly captures springtime in the city. :-)

Thanks for the heads up on poetry month and poem in your pocket day. One of the ideas is to post a poem on one's blog. Hmmm, better start thinking about that ... maybe I'll write one. ;-)

BTW, finally got the banana Kahlua coconut cake post up!

Lisa Johnson said…
jen - You're welcome! And I like the quote too. I'd like to read a biography about RLS. Quite an interesting man.

asha - It's supposed to be in the 80's over the next few days! Now to quickly pull out some summer clothes.

kirti - Maybe I should share some more of my poetry here? It's very rare that I do...

willow - Welcome! Thanks for stopping by. Glad you liked the poem and I hope that this state will step up!