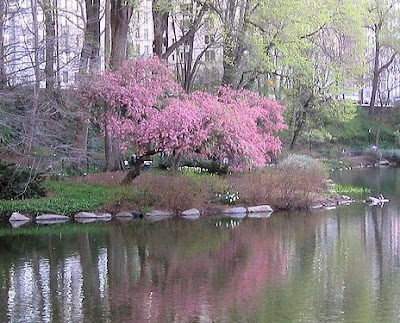 Photo of a lovely blooming tree in Central Park circa 2006, via platinumblondelife. This picture is my 1,000th flickr favorite!

I cannot believe that I haven't visited New York in over a decade. I've never been to Central Park and would love to see its full Spring glory. You can even follow Central Park on twitter to find out the latest news and events.

I've been trying for the longest time to write a post about the wonderful book by Professor, writer and prolific author Witold Rybczynski called A Clearing In The Distance. The book is about the life of Frederick Law Olmsted, the man who designed Central Park.

Whenever I've tried to write this post, I became too overwhelmed with thoughts and emotions. The only way I can do it is to accept that this post cannot even begin to express how much I enjoyed the book. This post will be sub-par in my eyes, but I really want to write it.

The first day of Spring makes sense to write this post, because Olmsted was a man who loved the outdoors, greenery and blooming of trees and flowers and understood how we humans need that connection. We are part of nature. And the beauty of nature and being in the outdoors is essential to our physical and mental health.

Olmsted came from a family of means, but still struggled to became the famous landscape architect that we know of today. He understood that Americans with money were able to escape to the countryside for a respite, whether it be in this country or often to Europe. Olmsted wanted to create pieces of tranquility or public parks in the middle of American cities, so that the average poor or working person could enjoy the health benefits of nature, even though they couldn't travel or take a vacation. It was his life's work. 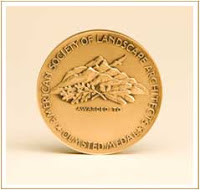 He's the founder of landscape architecture and an award is given in his name. The 2008 award was given to the Ladybird Johnson Wildflower Center at the University of Texas at Austin.


"The Olmsted Medal was instituted in 1990 to recognize individuals, organizations, agencies, or programs outside the profession of landscape architecture for environmental leadership, vision, and stewardship. The Medal honors Frederick Law Olmsted, considered the founder of the American landscape architecture profession and steward of the environment."


I'm thankful for the beautiful parks that we can find in many cities. Olmsted had a hand in so much of the landscape of our country. Spring is a good time to start visiting these parks and maybe even have a picnic.
As I think about the beauty of our cities and landscape architecture, I can't help but think about Boston City Hall. The building is widely hated by many people and was actually voted the number one ugliest building or monument in the world. I personally don't have a problem with it. 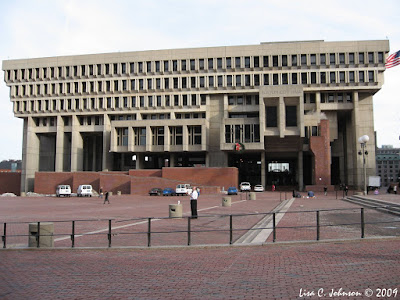 For a time, the building was going to be moved, but I think that's on hold for now. I wondered what Olmsted would think of the design of Boston City Hall. Well, I obviously cannot ask Olmsted myself, but I figured who better to have an understanding of how he would see the design than the man who wrote the book about him. So I asked Professor Rybczynski, and he graciously gave the answer below.


“Olmsted was definitely someone who would try to remedy a situation if he could. He was catholic in his tastes, and was able to work with a wide variety of architects, including classicists like McKim and Burnham, High Victorians like Vaux, and romantics like Richardson (I believe that his heart was with Richardson ). But I’m not sure that even he would know what to do with City Hall whose Brutalist architecture, I think, he would have found appalling.”


Well there you have it. Boston is a beautiful city. Especially in the Spring. But even Olmsted might have averted his gaze when it came to Boston City Hall.

Anonymous said…
Thank you for the book recommendation. I'm a big Olmstead fan too and have reserved the book from the library.

You make me long for a trip to NYC too. I may have to make a reservation and get myself there in the next month.

I have a December 25, 1897 copy of Harper's Weekly in which Olmstead's son writes about his father's early work in the Boston Parks.

Anonymous said…
What a beautiful photo, I've become addicted to flickr too!
As for Central Park, it's a world unto itself. I'll definitely get the book and so sorry about Boston's City Hall! Maybe you could stage a facade intervention and change it to, well anything else! Seriously, refacing a building like that would just take adding some ornament and flowers!
3/21/09, 8:08 PM

hope all is well!

Lisa Johnson said…
the paris apartment - Welcome! Thank you for stopping by and for the kind words. I like the idea of a facade intervention. LOL! Some paint, flowers, and bushes- maybe a silk scarf, and we could have it looking really cute! ; )

aviana - Well hello stranger! Great to see you around these parts again! It must have been great growing up around Central Park. There's always so much going on there. By the end of this summer, I hope I can be posting about a trip there.
3/22/09, 11:59 AM

Nance said…
I'm forced to agree that the City Hall is not a very pleasant building. It almost looks like it's trying very hard to be a sort of Asian Pagoda revival with a bit of the Wright influence. Yikes. Unsuccessful.
3/22/09, 3:59 PM

amisha said…
i can't wait till you visit NY again and i get to meet you!!
and i am so looking forward to spring in the park... today i saw the first trees blooming in brooklyn, so it should be coming soon!
xo
3/22/09, 9:15 PM

Lisa Johnson said…
nance - I guess I have so many good memories of the area around City Hall Plaza, that the design of it doesn't bother me too much. Like when you walk to the right, down the stairs, and cross the street, you're headed toward the waterfront and the North End. Mike's Pastry!

amisha - Me too! Will you be there in the summer?