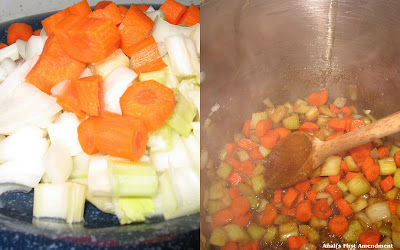 Haven't these past few days been wonderful? I'm so happy with who we have in the White House.

President Obama. It has such a nice ring to it. It was supposed to be so improbable, that maybe it might have been destined.

Soon after the election, famed blogger Pim, of Chez Pim, blogged about the election in a post called Chicken Soup For The American Soul. When I saw the post, I saved it under soup recipes on delicious. Eventually I'd be making chicken soup too. Pim described the soup this way.

"This simple and intensely flavorful soup was the perfect food for the climate that night - comforting, renewing, just what we needed, a chicken soup for the American soul."

Well, the weather got colder. I had some chicken broth ready. Carrots, onions, and celery were stocked in the fridge. And I was feeling ready for a simple comfort. I'm not even a big chicken soup fan.

But sometimes deep in your soul, you know that it's time for chicken soup. And the Inauguration was quickly coming upon us. I don't know if I had the Presidential transition intertwined with this soup in my subconscious, but I decided that it was time to make some chicken soup.

I don't have a true recipe for you, but I used Pim's as a starting point. I roughly chopped some carrots, onions, and celery. Maybe about 2 cups total. Sauteed them in a soup pan with some olive oil and Smart Balance and crushed garlic. I cooked some chicken breasts. Let them cool and cut the chicken into big chunks. I added the chicken broth to the soup pan with some salt, lemon pepper, ground ginger, Indian curry seasoning, and a bit of brown sugar to eliminate the bitterness.

Stir the ingredients, cover the pot, and let boil. I may have added some peas, spinach, and corn too. I don't remember. I was cooking fast and didn't have time to write everything down. But I added some cooked ruffle pasta later, the chopped chicken, and then the soup cooked some more until the flavors came together. 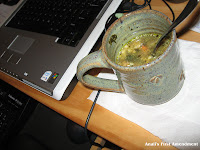 This soup was really good and G loved it. I'll have to make it again. Even without instructions, you can make this soup too. Use ingredients that you love. Those foods that nourish you and feed your soul.

*Updated* 2/16/09 - I should have updated this a while ago, but I wanted to let you know and thank Public Radio Kitchen for linking to this story. Click here to see it.

Nance said…
I just love adding ginger to chicken soup, but I always add fresh. I keep a huge root in the freezer at all times and just grate it as I need it. For soup, I hack off a knob and toss it in. Isn't it wonderful? Everyone wonders what "that flavor" is, and when you tell them--IF you tell them--they can't believe it.
1/25/09, 4:47 PM

Thank you for the birthday wish and it is always interesting to have a random converstaion. It opens up your creativity of thinking and conversing. Haha
1/26/09, 9:33 AM

Liz Dwyer said…
Yum! It was 40 degrees this morning in Los Angeles and I absolutely want to eat soup tonight. I think I'll make this without the chicken, but I don't know of a good substitute.
1/26/09, 7:38 PM

I'm a vegetable soup guy. Love a big bowl of good vegetable soup. Have you a recipe in your archives, or can you point me to one you especially enjoy from elsewhere? Thanks!

So So Simple said…
Homemade Chicken Soup
It must be in every culture. My Mother always made it when we were sick. I do the same the Jewish People have it right
Jewish Penicillin they call it.
Hey I haven't added ginger and curry before.
My Mother added a packet of chicken noodle soup to hers for that extra flavour boost Very yummy
1/28/09, 8:52 PM

Lisa Johnson said…
dmarks - Thanks for the thought!

lost in splendor - Welcome! And thanks!

nance - I really do need to keep fresh ginger in the house. I've tried, but I always forget that I have it and then it goes bad.

mizrepresent - It really does feel good!

Lisa Johnson said…
los angelista - That really is chilly for LA! Unfortunately, 40 degrees would be a nice warm up here.

cynthia - I think the craving is contagious! : )

suldog - Hmmm. If you click on Pim's recipe, you could make that same soup, but use a vegetable broth if you don't want chicken broth and just leave out the chicken.

I'm not sure what kind of vegetable soup you mean. If you check my recipe archives, there are some soup recipes there, but I think that they are mostly pureed vegetable soups. The recipe archives is just another blog, called Anali's Recipes, with most of the recipes from this blog listed by category. I have some updating to do.

You can send me an email if you have something specific in mind and I'll search around for some recipes for you.

Suldog said…
Thank you, Anali. I'll poke around over at your other place a bit and see what I find.

I mostly like the type of vegetable soup with big hunks of vegetable in it. Don't know if you ever had Durgin-Park's vegetable soup, but it was the best in the city. They took it off of the menu a few years back, and I've searched for something comparable since, with little luck.
1/30/09, 1:55 PM

Lisa Johnson said…
suldog - I only went to Durgin Park once, but I don't recall a soup. Truth be told, if I'm going to remember something it's probably dessert, not soup.

I think if you Google "chunky vegetable soup recipe" you should find something you can work with, then try to adapt it to your tastes. Let me know how it goes.
2/3/09, 3:17 PM