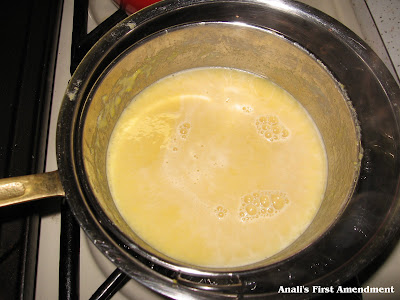 Just in case you're like me, and you're American, and you were trying to adapt an English dessert recipe. Or vice versa. From what I can tell, cornstarch is the same as cornflour. Or is it corn flour and corn starch? Two separate words. Not sure of that either. My box of corn starch is two different words. I've seen it both ways. But I digress.

There were some other issues with the adapting too. Like trying to turn sabayon into this English Custard recipe. I still believe that it can be done. However, I didn't make it there. I first learned about sabayon on the Flour Bakery Cookbook Blog, which is very cool by the way, and figured I'd give it a try.

Basically what happened is that I made the sabayon and asked G what he thought of it. He took just a small taste and said that it was good. I asked if he'd like more than just a taste and he declined. So I decided to transform it into pudding. It seemed to have the same basic ingredients. The main thing was the egg yolks. I had four extra that I had to get rid of, because of a cake recipe that I made, which called for four egg whites.

Anyway, I didn't realize that cornflour and cornstarch were the same thing. I think I was tired from all the whisking. So I just ignored it and hoped it would solidify anyway. It didn't. They all can't be winners people. Next time, I'm on it.

So So Simple said…
Anali
When you make an English custard you usually add a little cornflour to help stabilise the eggs then it doesn't matter if you accidentally bring it to a boil.
Never thought to thicken a sabayon though maybe the science is not right.
We're learning every day aren't we?
1/28/09, 8:59 PM

Asha said…
I think Cornstarch is ultra super fine Corn flour to thicken the sauce etc. Corn Flour is a bit thicker in texture compared to cornstarch, which is used as Masa Harina to make Tortillas etc? Atleast that's what I think! :)

Lisa Johnson said…
so simple - Luckily we do keep learning every day. When we stop, then we're in trouble!

asha - Thanks for the info! I didn't know about the different grades. That does make sense. I have used corn starch before, but had never heard the term corn flour until I came across the English custard recipe.
1/29/09, 2:05 PM