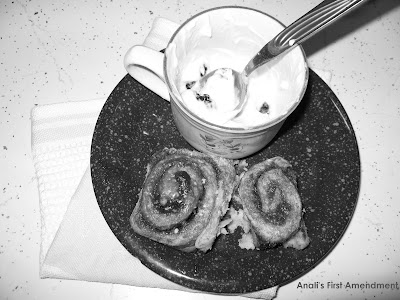 A few months ago, I found this recipe for cinnamon rolls. I saved the link and then finally printed it out. The recipe was sitting in a newly formed pile of recipes until I pulled it out recently. I think I baked these cinnamon rolls last week. They were gone so quickly, it's hard to remember.

They are very simple to make, because they don't contain yeast, so you don't have to wait for them to rise. I baked them at night, so the apartment smelled like cinnamon, which is a wonderful way to fall asleep. And then you can have the rolls for breakfast.

When I first told G that I would be making them, he didn't seem too thrilled. He'd previously eaten some cinnamon rolls without much filling and he didn't like having the plain roll remaining. These rolls won him over.

Whether you bake them at night or in the morning, these cinnamon rolls pair nicely with a hot drink to keep you warm and happy on a cold winter morning. I also had mine with some blackberries in vanilla yogurt for some extra flavor and nutrition.

These rolls don't have any eggs. The way that I adapted the original recipe, I subsituted Smart Balance Organic Buttery Spread for butter and Vanilla Soy Shake for the buttermilk, so they end up being vegan friendly too.

Improvisational Hints: If you don't have a pastry brush, use a spoon to spread the Smart Balance. You can also use butter or margarine if you prefer. If you don't have a rolling pin, use a tall sturdy drinking glass. Instead of the Soy Shake, you can use milk, buttermilk, rice milk, or even try eggnog for something festive this season. I haven't tried the eggnog, but if you do, you may want to decrease some of the sugar in the dough.

In medium bowl, microwave Soy Shake and Smart Balance. Combine with remaining dry ingredients. Sprinkle a clean surface with flour. Place dough on surface and knead until smooth. With a rolling pin, roll out dough into a rectangle. About 7x12 inches.

In a small bowl, combine dry ingredients. With a pastry brush, brush the dough with some of the Smart Balance. Spread all the filling evenly over the dough, leaving space on the edges. Take one side of the dough and roll it up. You will have a log. Cut the log in half, then cut that in half. Then cut each into thirds. You will have 12 cinnamon roll pieces.

Grease a square baking pan. Place each roll into the pan in four rows of three. Brush the remaining Smart Balance over the tops of the rolls. Bake at 400 degrees for 30-35 minutes, or until golden brown. Let cool for about five minutes, while you are making the glaze.

In a smill bowl, whisk together sugar and milk until smooth. Pour glaze over cinnamon rolls. Let sit for about five minutes, then serve. Enjoy!

Anonymous said…
Oh yes! The next best thing to falling asleep with a smell of cinnamon is waking-up and devouring these buns with a cup of hot coffee. Yum!
12/14/08, 8:59 PM

S said…
I have enjoyed your blog since stumbling upon it, but I swear, I think I've gained 5 pounds just from reading it! I'm home sick today, so those cinnamon rolls are looking really tempting.
12/15/08, 11:03 AM

Anonymous said…
(Sigh) Here we go again! But I really need to wait til it cools down a bit before I bake these. It's t-shirt weather here on the Gulf Coast, and my kitchen just gets so hot.

Susan from Food Blogga said…
Thanks for a recipe with Smart Balance. I used it a lot in baked goods and find it works really well. And cinn rolls are just YUM!
12/17/08, 5:31 PM

Lisa Johnson said…
zen chef - You are so right!

Lisa Johnson said…
suldog - Imagine a life without cinnamon? I guess we wouldn't want to!

cheryl - Lucky you with the warm weather. We're in the midst of our second snow storm in 3 days! Brrrrrrrr!