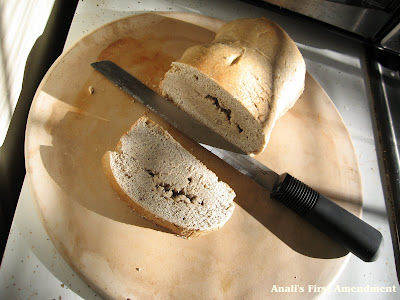 Sometimes it's all about the morning light. I realized that the photos that I was looking for needed this light. But it only lasts for a few minutes. And you don't get sunlight everyday in November. Especially in Massachusetts. Plus, as you know, I'm not a morning person.

But I caught it today. I followed the sun as it moved from the windows in the sun room, to the living room, seemingly skipping around to my bedroom, then jumping back to the kitchen. I had the loaf of bread set up and ready to go.

Well, the picture below was actually taken at night and it's a different loaf of bread. I made one loaf on Monday and another one on Thursday. 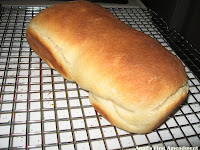 I actually first tried the recipe a few weeks before, but knew that it needed some more work. I usually don't try recipes repeatedly, but I've become a little obsessed with trying to make the perfect loaf. 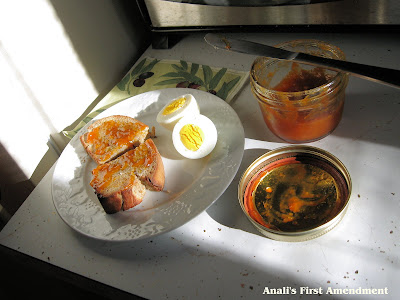 I had a boiled egg and used some of the jam that I won from Zen Chef. It's the last of the three jars and G and I enjoyed all of it.

Well before this post starts rambling out of control, which is very easy to do, let me just focus on two main things that I want to convey to you. First, if you don't have a bread knife, you should get one. They are relatively cheap and make all the difference when you try to slice a loaf of bread. I have the Good Grips bread knife from OXO, but I'm sure most any brand will be fine. I compared cutting the loaf with a few different knives and realized that the only way to get a decent slice was with the bread knife.

Second, experiment with this recipe as with all recipes. No recipe is ever really finished and the one that I'm going to provide you below is no different. I made this bread three times and it's been slightly different each time. I've used different flours mostly. The first time I think I used all white flour. The second time I used 2 cups white flour, 1 cup rice flour, and 1/2 cup soy flour. The third time, I used 1/2 cup buckwheat flour, 1/2 cup soy flour, and 2 1/2 cups white flour. The main thing is to keep your proportions the same - 3 1/2 cups flour in this recipe. And try to have at least as much white flour as the other types for a similar texture.

I'm still working on trying to get the bread to rise a little more. So I've added some baking powder and I keep adding a bit more yeast, especially with the addition of different types of flours. Different flours have varying amounts of gluten and this will impact how it rises.

This bread is an ongoing project for me and I'll probably make some more by Sunday. Plus it's healthier than store bought bread and cheaper. Remember my Homemade Bread Pledge last year?

Well, that's about it. Here's the recipe. Enjoy!

In a small microwave safe bowl, add water, rice milk, Smart Balance, and honey. Microwave for about 2 minutes. Whisk in the yeast until combined. Let sit for about 5 minutes. The mixture will bubble up.

In a large bowl, combine flour(s), salt, and baking powder. With a large wooden spoon, stir in the liquid mixture until it becomes dough and is too difficult to stir. Place the dough on a clean and floured surface. Knead the dough for about 5-10 minutes. Add additional flour as needed. When dough forms a ball, place in a greased bowl. Cover and let rise for about 45 minutes. Form into a loaf by stretching out and folding the ends underneath. Place loaf into a greased loaf pan. Let rise for about an hour. Bake at 400 degrees for about 30 minutes. Let cool on a wire rack.

So So Simple said…
Anali

I have found the perfect French bread. You can rip it off and have it with soup or make a sandwich. Not only is it good it is sososimple