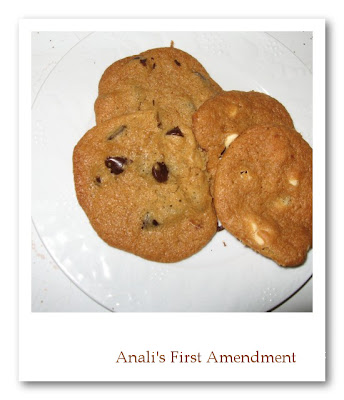 As you can see, I've been blogging at a frenzied pace. I can't stop thinking about the election. It's stressing me out. I've been baking to cope.

Then again I bake when I'm happy too. I've baked several dozen chocolate chip cookies in one week! This is not good. I mean they are good, but... Well, you know what I mean. I fear that I'm suffering from ESBS. Election Stress Baking Syndrome. 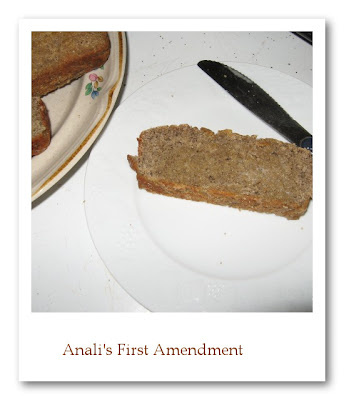 And unfortunately all the baking doesn't turn out well. I just tried Mark Bittman's Fast No-Knead Whole Wheat Bread. I took the bread out of the oven about a half an hour ago. It was warm and smelled pretty good, so I asked G to try it. He said, "It feels like sand. I don't know what to think." He now refuses to eat any more of it.

It's not that bad, but it certainly wasn't what I had hoped for. I don't think that it was the recipe necessarily either. I'm starting to realize that I don't really like buckwheat flour too much. And that's what I used with white flour in place of whole wheat flour, which I don't have in the house right now. I can't throw it away, so I just have to use it and get rid of it.

I also adapted it by using soy flour instead of rye flour. I used more yeast than the recipe called for too. I used a packet of yeast, which is about 2 1/4 teaspoons. That's more than double what the original recipe calls for. I wanted to be sure that it would rise well. It did not. I think I'll stick with bread that needs kneading. It's a better stress reliever that way too.

For now, here is the chocolate chip cookie recipe that I promised you before. I halved the recipe each time that I made them. The first time I also halved the shortening (Smart Balance) and used peanut butter for the other half.

The second time that I made them, I didn't use any peanut butter, but I did half of the cookies with chocolate chips and the other half with white chocolate chips. This is a great recipe to keep trying new things with. It's very adaptable. Enjoy!

Combine ingredients in bowl. Scoop out cookies by tablespoon and place on cookie sheet. Bake for about 12 minutes at 375 degrees.

Anonymous said…
I keep baking muffins. I was blaming the change in the weather, but it could be the election.

I'm having an election news black-out at my house. I will not read or watch anything election related until next Tues. night. It helps.
10/28/08, 9:22 AM

Nance said…
Have you made buckwheat pancakes? I love, love LOVE them, but cannot get them anyplace when we eat breakfast (rarely) out.
10/28/08, 3:50 PM

Anonymous said…
For me, the election stress syndrome manifested as a creepy dream where Sarah Palin was my mother. I'm still shaking! Ughh..

Lisa Johnson said…
kaylee - It's so good to see you here again! I'm doing really well and recovered from my surgery. It's been 6 weeks already!

kate - Welcome! I thought the same thing at first too, but I think I'm baking more than normal even for me! ; )