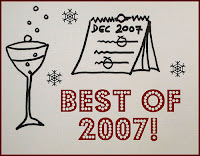 I'm so sleepy, but I want to do this post before I find that 2007 has vanished. What a year this has been! I made many changes to my blog this year. I realized how many when I looked here and saw how my blog looked in the summer of 2006. What a difference!

I wanted to change the look and feel of my blog and I did it. I also wanted to include some advertisements, which I did by joining the Blogher Ad Network and the Boston Blogs Ad Network. So far, I'm not making much money, but every bit helps. I gave much of it away to a local organization that provides food to those in need. I had given to them before, but because of your support, I was able to give a little more than I could have otherwise. Thank you!

Another thing that I finally did this year was organize my recipes. I had lots of random pages in folders and couldn't find anything. Over years, I had cut recipes out of magazines, newspapers, and printed them out from blogs. It was getting totally out of hand. Over about a week, I threw out a bunch of recipes, then organized the remaining ones by type and put them into four notebooks. What a joy it is to look for recipes now! I actually find what I'm looking for.

I'm doing the Homemade Bread Pledge that I mentioned here, which will be an event going from 2007 into 2008. Keeping my pledge is one of my goals for the new year. So far so good! I also want to organize all the recipes on this blog, so they are easier to find.

In 2008, there are some other blog changes that I'd like to make, but I'll keep some to myself. I'd rather make the changes and then let you see them. I'm submitting this post as part of Nupur's Best of 2007 Event. On New Year's Day, there will be a Roundup of all the posts. It will be interesting to see what everyone did this year. Have you made any resolutions for 2008?

Nupur said…
Thank you for participating, Anali :) Your recipe binders look amazing!! Mine are mostly "bookmarks" on the computer and I can never find anything I am looking for :D
Your homemade bread pledge is something that is part of my new year's resolutions also: to make more bread at home and experiment with more whole-grain bread.
Happy New Year to you!!!
12/27/07, 6:50 AM

Nance said…
You are way ahead of me in terms of preparing for 2008. I'm still in a bit of a Christmas hangover at the Dept.

Cookie baker Lynn said…
Kudos for such excellent organization! I've made one binder for recipes and it's full now, so I guess I need to branch out and make more, specific to the type of recipe. Of course, I'll need a huuuuge one for desserts. :-)
12/28/07, 10:53 AM

Just a short note to let you know that I tagged you for 7 Random Facts... meme...
http://www.coffeeandvanilla.com/?p=1295

Participating is totally optional so I won't feel offended if you won't have time to post it :)

dfunkydog said…
Again me, I forgot to tell you that your filed recipes are very impressive!! The only place where are have recipes except the books, is my computer (blog backup) and some bookmarks for things I would want to try.
12/28/07, 7:08 PM

Lisa Johnson said…
nupur - You're welcome and thank you for putting together such a cool event! I guess we are both going to be big bread makers in 2008! :D

asha - Happy New Year! I'm running out of space too and have to buy another binder! I keep adding dessert recipes like crazy! ; )

cookie baker lynn - I realized that I have to get another binder too. I've been printing out recipes like crazy. And I think your fudge recipe did it! : )

Lisa Johnson said…
susan - All the best to you too in the new year! ; )

coffee & vanilla - Thanks Margot! I'll be putting up the meme hopefully before next year! ; )

dfunkydog - Welcome! Thanks! I guess I'm still old fashioned in wanting to keep my recipes on paper. There's something really comforting about flipping through the pages. ; )
12/29/07, 1:16 AM

Gretchen Noelle said…
Your recipe binders are inspiring. I have envelopes of recipe cut outs. It used to be one and somehow it has multiplied! Your homemade bread pledge sounds challenging but it just may get the better of me since I am just starting to experiment with baking more bread. Happy New Year!
12/31/07, 10:42 AM

Lisa Johnson said…
gretchen noelle - Welcome! Happy New Year to you too! Recipes do seem to multiply don't they? Must be all the ingredients! I'm behind on my bread baking too. ; )
1/1/08, 9:27 PM